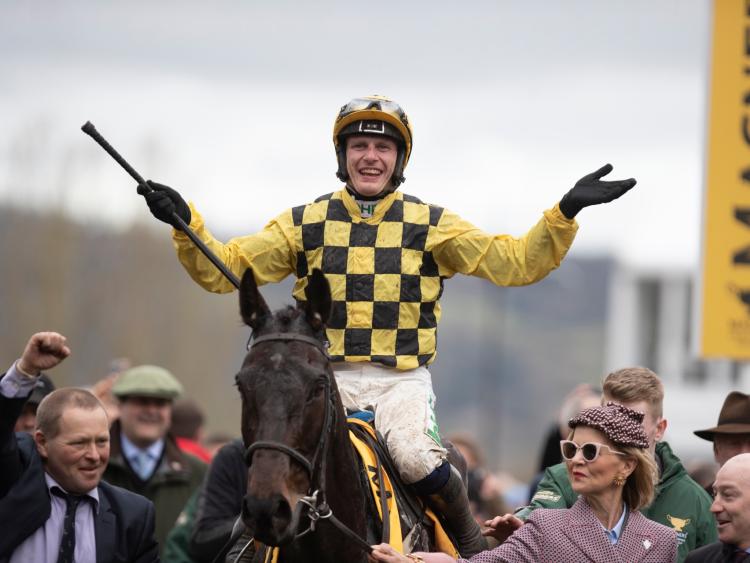 The drying ground should see TRITONIC (3/1) to best effect for Alan King and Adrian Heskin. The Irish juveniles are strong in the shape of Quilixios and Zanahiyr but the manner in which Tritonic scooted clear of rivals in the Adonis at Kempton last time out really caught the eye on identical ground to this week. Even on soft with a touch of heavy on his prior start, he stayed on well to catch Casa Loupi at Ascot, the same horse he beat by 10 lengths in Kempton. There isn't much between the Irish pair based on form but I would lean towards Quilixios based on the way he finished out his race at Leopardstown, beating Saint Sam and Busselton, in February.

I wouldn't have a strong opinion on this race this year but I am tempted to have an eachway nibble on GOWEL ROAD (16/1) for Nigel and Sam Twiston-Davies. He's won his last two starts quite easily and I like his form behind Bear Ghylls who ran well to be fourth behind Bob Olinger in the Ballymore here on Wednesday. Gowel Road finished just one and a half lengths behind Bear Ghylls at Ffos Las last November.

I'm going for STREETS OF DOYEN (20/1) who is proven over course and trip and has plenty to offer at a big price. He ran a stinker at Naas last time out wearing cheekpieces but I am hoping he can bounce back. Prior to that blip, he had put together four wins on the spin, including at Cheltenham last October when he beat Minella Encore by three and a half lengths on similar ground. That was over the same trip as today (2M 7F) and he even won over three miles on good ground in Gowran last year where he beat Flooring Porter by five lengths. Based on that, even though he got plenty of weight from his rival, there is more to come from him and he could still be on a decent mark. He is overpriced at 16/1 and can hopefully give a good account again.

AL BOUM PHOTO (5/2) will aim to emulate Arkle and Best Mate in winning three Cheltenham Gold Cups. I genuinely hope he does it for Willie Mullins who waited until this horse's win in 2019 to get his hands on the Gold Cup. He is the quintessential Gold Cup horse now and so lightly raced for that very reason; to have him primed for Prestbury Park. He is going into the race this year with an identical prep to last year. In 2020, he beat Acapella Bourgeois at Tramore on New Year's Day before going to Cheltenham and winning the Gold Cup in March. Again in 2021, he raced and won at Tramore on New Year's Day; he even beat the same horse in Acapella Bourgeois, only this time by further.  It will take something special to stop him. The story for the UK contingent will be the horse named after AP McCoy and trained by Nicky Henderson. CHAMP (9/2) was dead and buried, fully 10 lengths behind the leaders jumping the last in the RSA last season, but somehow managed to reel in and beat Allaho and Minella Indo on the line. The field couldn't run down Al Boum Photo up the hill in the last two years but if one horse can, it's Champ, and what a story it would be for AP McCoy and owner JP McManus. A Plus Tard represents the powerful Henry De Bromhead/Racheal Blackmore pairing but I was disappointed with his run in defeat to Min in last year's Ryanair. I can't make a strong enough case for anything else at the minute and 5/2 is a nice price for Al Boum Photo, perhaps the most under-celebrated horse in training.

I think Billaway is the most likely winner of this race for Willie Mullins. He was second to the reopposing It Came To Pass in this last year but has been more consistent since. For me, 3/1 is too short and the Hunters chase is a race for an eachway bet for me. The winner was 66/1 last year to that will show you that anything can happen in this race. I am going for a bit of a risky one with MR MANTILLA (25/1). He was been picking up wins on the Irish point-to-point scene most recently beating Bellow Mome from the Willie Mullins yard at Stradbally in December. He beat Rewritetherules in November and the same horse was 6th behind Billaway at Down Royal a month later. It's not exactly a clean line to run through the form but I'm willing to take a risk that Mr Mantilla is good enough to get involved here. The Hunters chase is always a fascinating race. Don't discount the Enda Bolger runners either. He won this race in 2015 and 2016 with On The Fringe.

I think ELIMAY (5/4) has a touch of class about her and can get the better of this field for Willie Mullins, JP McManus and jockey Mark Walsh. She has won three out of her four chase starts with her only defeat coming at the hands of stablemate Allaho. She beat Shattered Love easily by five lengths at Naas last time out and a step up in trip and drying ground is all in her favour. I'd be surprised if she isn't odds-on before the start, particularly after Allaho's exceptional win on Thursday.

Gentleman De Mee is the favourite for Willie Mullins but I'm going for GALOPIN DES CHAMPS (13/2) from the same stable. This one is very interesting based on his run behind Appreciate It at Leopardstown. He was just nine lengths behind Tuesday's runaway winner of the Supreme and looking through the field, that was a very hot race. Ballyadam, second in the Supreme a few days ago, was second that day in Leopardstown while Blue Lord, who would have been second on Tuesday had he not fallen at the last, was third. The selection here was only a couple of lengths off that pair in Leopardstown and could be suited by the step up in trip here to 2M 4F.

SELECTIONS AT A GLANCE: