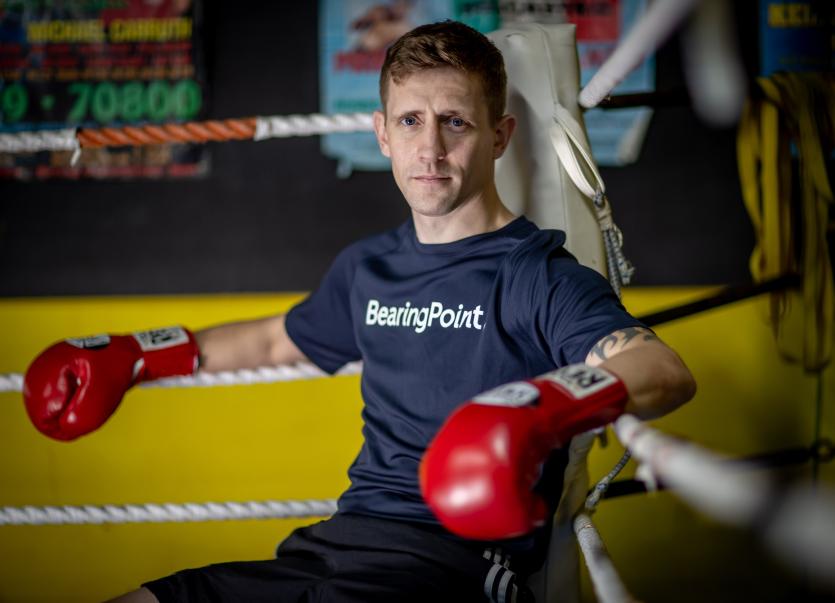 Like most kids Eric tried out all the usual sports, from athletics, soccer to Gaelic football but it was boxing that he quickly realised was the game for him and under the guidance and watchful eye of the St Michael's coach, Dom O'Rourke he took more and more to the boxing.
Dom O'Rourke was much more than a coach though, as Eric Donovan explains.
“Dom became more than just a coach to me; I would not have went down the right road only for Dom O'Rourke. Where I grew up in Athy, I came from a disadvantaged area; education was not really something people from my community excelled in or did well in; the club was a great outlet for m; it was only open two nights of the week but then (unfortunately) outside of that, at a very young age, I got involved all sorts.
“ I felt at the time I was not doing anything my peers were not doing so it wasn't a case of me knowing I was doing wrong; more a case like I was just doing what every-
one else was doing at the time but at 16, 17 and 18 it didn't take long to catch up with me and I started to feel the consequences of that; mentally, emotionally.
“The drink and the drugs were doing something for me, in fact they were becoming crutches for me and I was really struggling for a long, long time but the boxing club was the place I always went back; when I found myself in bad places in life; the boxing club was the place I always went back to and started building again.
“I would go back there and get physically well and when you get physically well you get mentally well; when you start getting physically fit your mind follows your feet sort to speak; your mind starts to improve but Dom O'Rourke was the one that always encouraged me, followed me, pursued me and never gave up on me and always brought me back.”
I don't know how many times I quit the club, says Eric, “but he (Dom) always came back to me because he knew that when I had no routine, no structure in my life, I had no life, he knew how important the club was to me and for me and he kept bringing me back until finally the penny dropped and I realised what was going on and at 26 years of age I realised I needed to ask for help, I needed a bit of assistance, emotionally and mentally for the problem I had and once I started the process of therapy for my mental help and emotional well-being my life started to get better immediately, like magic, it was like a miracle.”
Bur Eric emphasises that “you have to be honest with yourself, and be honest with another human being because no matter how smart, or clever you are, or think you are, you cannot change something unless you acknowledge it yourself first.”
The principles of boxing are brilliant; the confidence, the self esteem, the sportsmanship; taking a punch, giving a punch; shaking hands, embracing one another after a fight, winning or losing, the respect element of the thing and for me, what worked for me really were, the people in boxing, the likes of Dom O'Rourke.
“If Dominic O'Rourke was not my coach I just simply don't know where I would be today; I grew up with friends who got locked up, went to prison; went down the road of addiction, heroin, you name it, I would just hate to think where I would be if it were not for Dom; boxing has so much potential but apart from that it is the people that are involved in boxing; the volunteers; the people who open the club night after night; especially for the marginalised community, from all walks of life and all back grounds and teaching them not only the fundamentals of boxing but teaching them about life and how to stand up and be proud on their own two feet; that is what is so special about boxing, the people that are in it.”

In a somewhat unusual move Eric Donovan linked up with a company called BearingPoint, ‘a leading business and technology consulting firm delivering business results through innovative solutions which are running some of the largest organisations and government departments in Ireland.’
“One of the managers from Bearing Point, Eric Conway, his wife, Aileen Wynne is an Athy lady and is joint owner of A and A Pharmacy in Athy, one of my sponsors and a great supporter; both Aileen and Eric come to my fights and I got to know them and during the lockdown BearingPoint had 300 employees working from home and asked me and asked me would I help him do some online fitness classes.
“They liked what I was doing, charity work and mental health work and seminars I was giving; they liked that and then I did the Do It For Dan campaign and they sponsored me; then I landed the big fight with Sky Sports BearingPoint came on board as a sponsor and they were very happy how that went and after that approached me to become a Healthy and Wellbeing brand Ambassador and our partnership has gone from strength to strength; they acknowledge that sport and business has a lot of similarities, the tools and exchanges of both are very transferrable.”
Sponsors, of course, are a major part in boxing and Eric Donovan is extremely grateful for the people who have supported him over the years, both relatively recently and long term.
These days Eric, who has two young sons, lives in Tullyallen, just outside Drogheda with his long term partner Lauren.
Lauren teaches in a nearby Gael Scoil and they are due to get married later this year. In fact, says Eric, this will be our third attempt to attempt to get married; we had to postpone it twice due to Covid-19 but hopefully we will get it finally completed this year.
“I wasn't happy the kids saw me get knocked-out against Barrett but there is a lesson in that and I want to show them in order to win you have to lose sometimes; the main thing is to learn from your setbacks and from a defeat elation and joy sometimes come.”
Adding “sometimes we learn more from failure; from adversity but nothing is handed to you, you have to go out and work for it.”
Just like Eric Donovan has done throughout his life; not just his sporting life, but life in general.
No doubt Eric Donovan faces a big task in Italy on May 14, a ten round bout, something he has very little experience of but he is confident, well prepared and really looking forward to it.
Fight fans everywhere wish Eric all the best as he bids to fulfill that European title dream.