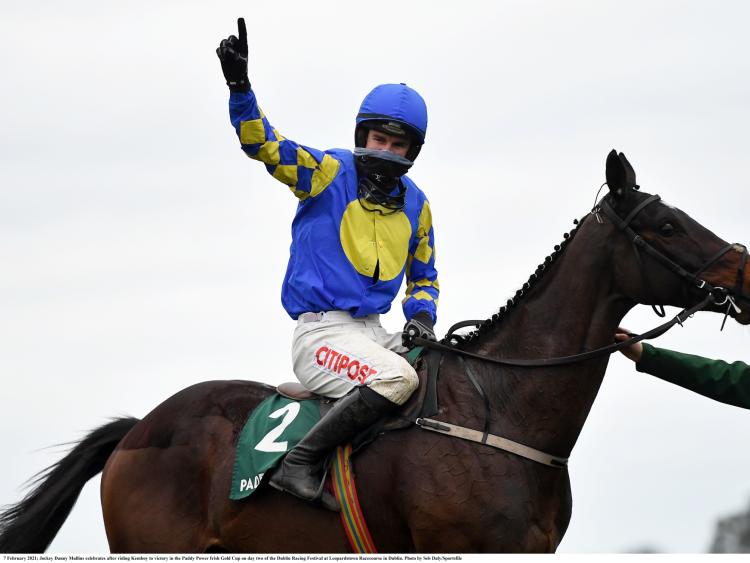 Kemboy after winning at Leopardstown earlier this year

DECIMATION (9/4) is the one for me in this for the powerful De Bromhead/Blackmore combination. Blue Sari is the market leader and based on his beating of The Bosses Oscar at this track last year, he would take all the stopping if not for his inability to finish his last three starts. A horse with letters instead of numbers in their form is one to be avoided for me from a betting perspective. He was pulled up twice at Leopardstown in February and then fell, albeit when going well and looking likely for second place, in the Coral Cup at Cheltenham. Decimation on the other hand is very progressive and is consistent. His form book reads 22212 for his last five starts and his 10-length win over Hallowed Star two starts ago was very eye-catching.

Three Cheltenham winners go head to head here and the one I'm siding with is VANILLIER (3/1). The Albert Bartlett winner is on the up in a big way for Gavin Cromwell who had great success with hurdlers over the bigger distances this spring. His charge Flooring Porter also won the stayer's hurdle at Cheltenham and this race is over three miles. He won over 2M 7F at Cheltenham and was galloping through the line at the end, winning by 11 lengths. Galopin Des Champs and Telmesomethinggirl are big dangers for sure but something tells me three miles will suit the selection best of the trio.

Clan Des Obeaux is an interesting British raider here but both Al Boum Photo and Kemboy have had his measure in the past and I think it is a match between the Willie Mullins pair once again, as it was in 2019 when Kemboy emerged victorious. I've gone back and forth on this all week but I just keep landing on KEMBOY (4/1) upsetting the odds again. He will get his conditions to suit again as he did in 2019 and on that day he faced the Cheltenham Gold Cup winner in the shape of Al Boum Photo. He was only third this year and while Kemboy was well held in the Cheltenham showpiece, he is much more suited to the flatter track at Punchestown. For whatever reason, Al Boum Photo just didn't sparkle at Cheltenham in a race he was laid out for and I think the effects of that defeat might be enough to let Kemboy boss this for another win.

I'm taking KILCRUIT (5/4) to reverse the form of his Cheltenham defeat to Sir Gerhard here. The pair clashed in a race dictated by Sir Gerhard and he was doing well to hang on from a fast-finishing Kilcruit. Sir Gerhard got first run that day and it's tough to reel in an opponent up the Cheltenham hill. I think the tactics will be different today and Derek O'Connor won't let Patrick Mullins on Sir Gerhard get too far in front of him. I still have visions of Kilcruit's 12-length win over Letsbeclearaboutit at Leopardstown in February and I can't help but think he is very special. He was one of my bets of the week and let me down at Cheltenham but I think he can repay the faith today.