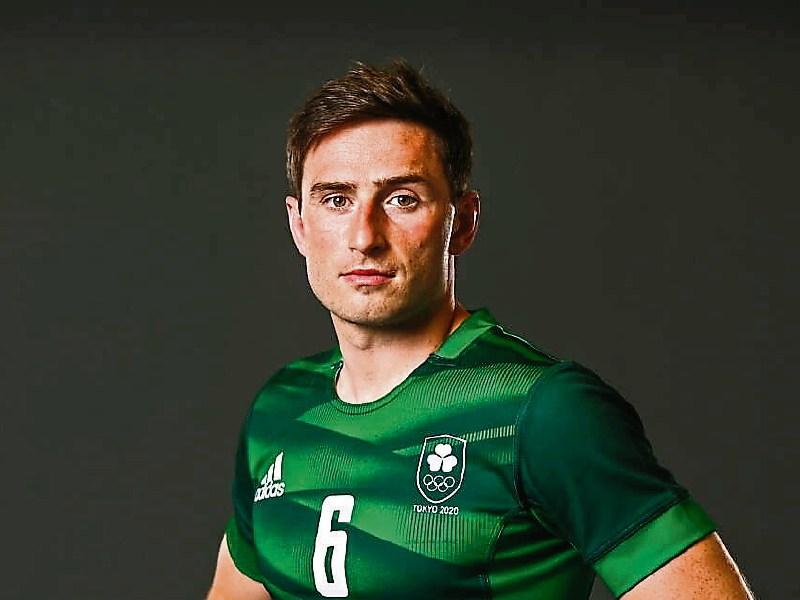 Still out of breath, Billy gushed about what the occasion meant to him and his team mates and all the sacrifices they had made — but he didn’t forget to wish a Happy Father’s Day to his dad Colm back home!

“You dream of doing something really special for your whole life.

He added: “I think that’s Sevens like — the bounce of the ball goes your way and you can end up in the Olympics — that is just incredible.”

"You dream of doing something really special for your whole life"

"Kids might start playing rugby after seeing us at the Olympics, it's pretty cool"

"Being an Olympian, no one can take that away from you"

The Olympics is the next step in the remarkable journey that Billy Dardis has been on.

He has already captained his country at the 2018 Rugby World Cup and was also part of the Irish team that nearly qualified for the 2016 Olympics in Rio.

Billy’s story with rugby began almost 20 years ago in Naas Rugby Club in Naas. He still lives in the town with his parents Colm and Barbara on the Dublin Road.

Billy started his playing career when he was seven and got onto the under 9s team, and he was mentored by coaches like John Gillespie, Bill McGrath and Mick Higgins.

He later went on to UCD to study for a BSc in Health & Performance Science later furthered his education with a Diploma in Finance, Griffith College Dublin.

Speaking to the Leader before his flight to Tokyo, Billy commented: “GAA football and rugby complement each other very well because you need to be able to field a ball and be strong and athletic when you run and when you tackle. ”

He added: “Qualifying for the Olympics is going to be great for Irish rugby, Irish sport, Irish rugby and Sevens rugby.

“It gives a new pathway for young people who are interested in the sport to progress.

“I hope that the IRFU will take advantage of the new high profile the sport receives because of the Olympics.

“Kids will be watching Irish people playing the game on the TV and in newspapers and so it will really create an awareness.

“It will be an incredible spectacle. It will put smiles on faces and hopefully will reach a new audience.”

Billy is a natural communicator and no surprise that he was chosen as captain to motivate and inspire others.

Rugby sevens, which developed soon after the main sport was founded in the 1800s, consists of seven players playing seven-minute halves. 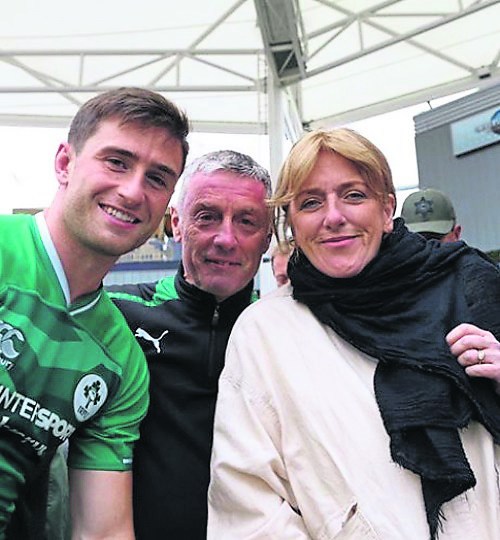 Billy Dardis with his parents Colm and Barbara

The game is administered by the IRFU and World Rugby and is very popular across Europe as well as parts of Africa, Asia, the Americas and the South Pacific.

Rugby sevens featured in the Summer Olympics for the first time in 2016.

Billy was awarded captaincy of the Irish Sevens team in 2017 as they created history, qualifying for the HSBC World Series in 2019 after leading them to a Rugby Sevens World Cup in San Francisco and European Championships.

Billy and his fellow players are fully professional but some may have part-time jobs or studying to supplement their income or help their future career prospects after sport.

The Naas native has just completed a Masters in Management Consultancy at the Michael Smurfit Graduate Business School which was two years part-time.

He now hopes to work as a strategy consultant to corporate firms. Billy says that training with the rugby sevens is on a par with a provincial rugby team like Leinster.

A typical day is to train from 8am to 3pm and then players choose to work part-time or study.

Many of them are qualified or training to be physios, lawyers, business consultants or involved in tech start-ups.

A day off on Wednesday is used for yoga or other interests.

“A lot of the guys in this squad have made a lot of sacrifices to get to the Olympics,” said Billy.

“They have put their lives on hold over the past few years. But he added that like any professional sport, players need to put things in perspective and sure they have down time.

“You can’t be 100% rugby so that it’s all that’s in your head, because if you’re not playing well that will affect you disproportionately.

“You’ve got to have other interests, and friends outside rugby.”

Billy flew out to Tokyo via Doha on Saturday last and he and his team mates immediately entered quarantine camp in the Olympic village.

The squad took in the opening ceremony on Friday, July 23, and the first match against South Africa is this Monday.

Billy said the initial shock and disbelief of qualifying for the Olympics has sunk in a bit more and now there are games to be played and won. It seemed unbelievable at the time.

“We were laughing to ourselves saying: “We’re going to the Olympics!’”

He added: “We’re in the thick of it now. It has become more real.

“We know we will be playing South Africa, the USA and Kenya in our group games. ”

He said the total ban on spectators at the events shouldn’t affect the team’s performance.

“We have played in some pitches in the past and it’s one man and his dog.

“But of course a good crowd can rev you up a notch and push you to new levels.”

Billy went on to say that there is a great party atmosphere at some tournaments for fans and families of players.

It is often like a music festival with rugby instead of the music.

Ireland are familiar with their Pool opponents having played against all three during 2020 and faced USA in May.

In their last encounter, Ireland drew 19-19 with South Africa — the bronze medalists in Rio — during the Los Angeles round of the World Series in 2020, while they went head-to-head with Kenya in Cape Town in December 2019.

Billy told irishrugby.ie: “It is going to be a very challenging Pool but we’ve come up against those three teams regularly before and will take confidence from previous meetings.

“We’re really looking forward to getting over to Tokyo and stepping onto the Olympic stage.”

And the Irish team will be hoping to be among the medals when the final games are played in Tokyo.

Just like Billy said in the famous interview last month in Monaco about going to the Olympics:

“You have that for life.

“That’s beside your name — when you’re 60 years old and you’re down in the pub: ‘That guy went to the Olympics’.