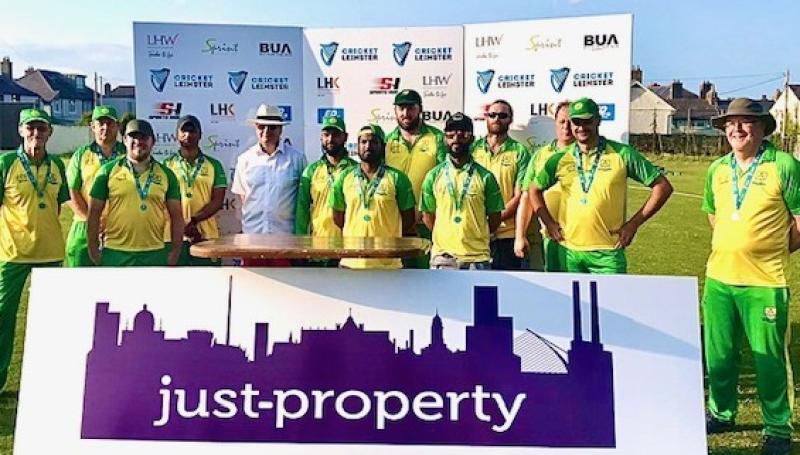 Halverstown2’s exciting T 20 Adamstown Cup run came to an end in Terenure last weekend when they lost in the final to a Terenure 4 team who passed the 118 run target set by Halverstown with just 7 balls left. It was a 6 wicket defeat that ended the hopes of the Halverstown Club winning its first cup for 20 years.

Captain Des Drumm won the toss (yet again!) and elected to bat in the stifling heat . Openers Mark Ronaldson and Abhi Pandey put on a creditable 32 for the first wicket , while Manik Islam top scored with 29. Kilcullen resident Paolo Rosa’s 17 and Danny Ruddock’s 21  moved the score on but the vital last four overs saw wickets falling and, disappointingly, just 13 runs scored. It was a total that was somewhat tricky to defend ; just 15 more runs could have made all the difference.

Terenure’s  run rate was no better than Halverstown’s and after 17 overs they were actually 2 runs behind the Kildare team’s score at that point. However they had wickets in hand and, vitally, young James Hanrahan, who opened the batting, was still at the crease. His 66 not out was a match winner as they passed the target at the end of the 19th over. Danny Ruddock, whose father Alan captained Halverstown the last time they won a cup, took a wicket whilst brother Matt fielded brilliantly and took a catch. 12th man Stuart Hayes, fielding for the injured Ahsan Syed, took the catch of the day whilst Des and Manik took good catches also. Two wickets for Sallins resident Abhi and one for Sahab Uddin were the other wickets taken in a hard working but tough day in the field.

Cricket Leinster’s President, Stella Downes, presented the team with their runner-up medals. Des  thanked all the 21 players who had played so well for Halverstown 2 over the course what was his team’s first  ever competition and stressed the pride the club had in their performances, including today. “However this young Terenure team bowled and fielded really well and James Hanrahan turned in a fine innings in a tense final, which is not easy. It was a sporting and close encounter but we were beaten on the day by a good team”. Club President Hubert Beaumont, who was present, encouraged the players to look forward: there will be other days for this promising new Halverstown 2 team!