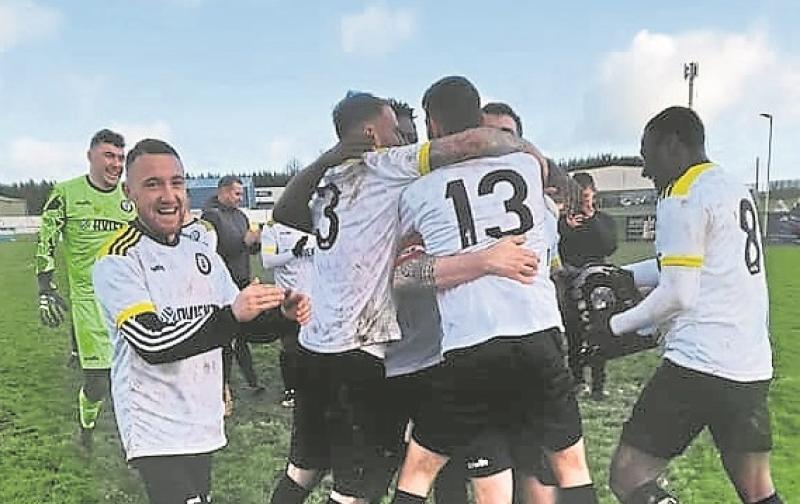 Naas United become the first ever winners of The KDFL Senior Division Shield with an emphatic 5-0 win over a young Kildare Town side who are certainly ones to take notice of next season.
United could not have got off to a better start when Adam Colton was fouled on the edge of the area in the 3rd minute. Dean Bowers stood over the ball and struck a low free kick which curled around the wall and completely deceived the Kildare Town Keeper.
Naas had beaten Kildare narrowly 2-1 twice during the league campaign and they almost let the Rathbride road men back into the game though when Baba Isaka almost headed past his own keeper on 10 minutes, but Keith Higgins was relieved to see the ball pass his post.
Higgins had to be alert twice more as No.10 and No.6 struck from distance to force saves as Kildare found confidence.
It was end to end by now and Dean Bowers saw 2 chances of his own go wide as we reached 20 minutes.
Five minutes later good play out wide from Dane Higgins saw his cross tipped over the bar and from the resulting corner, Ver Nolan saw his cross go straight in to give Naas United a 2-0 lead.
The game got tight again for a few minutes, but eventually Paul Clifford, Paul Ometeso and Dean Fennessy got to grips with the midfield area and Clifford in particular was excellent in the holding midfield role allowing Ometeso and Fennessy to influence proceedings.
Kildare had a set piece chance in the 41st minute that saw Keith Higgins again make a save as No.2 rose highest to get a header on target.
Higgins quickly set up a counter attack and Adam Colton found himself through on goal, his shot looped up off of the Kildare keepers save and back to the path of Bowers who saw his header cleared off the line for a corner.
Ver Nolan’s set piece delivery has set up many a goal over the years and he did it again as United captain John Paul Higgins put his body on the line to power a header into the top corner and give his side a 3-0 lead going into the half time interval.
A 3-0 score line was not to be taken for granted by United as it’s been known in the past for teams to come back from the dead. So United came out with a similar attitude to the first half and with just 50 minutes gone on the clock they made it 4-0 as Dean Bowers showed his class in front of goal again after a perfectly weighted pass from Baba Issaka set him free, as cool as you like he nipped onto the ball and lofted it over the out rushing Kildare keeper.
It took only another minute for Bowers to complete his hat trick and what a goal it was, Rob Heavey, Dean Fennessy and Dane Higgins all combined brilliantly to set the ball into his feet, he turned, beat his man with a drop of the shoulder and struck a shot from 25 yards out that was always curling away from the keeper and into the top corner of the net.
Kildare Town were soon down to 10 men when No.7 was sent off for 2 quick yellows and From then on in it was a good display all round for the side in front, Rob Heavey and Ver Nolan doing well at full back before Nolan came off with a dead leg, Dean Fennessy showed his brilliance on the ball with some lovely passing and the work rate all round was exceptional, Bulent, Zack Moura and Bobby Mizono came off the bench and added some pace when the game was going a little flat but despite a sending off late on for both sides it ended up Naas United created history by being the first ever winners and John Paul Higgins the first ever Captain to lift the KDFL Senior Shield trophy and they signed off on 2021’s campaign on a fantastic high.

Man Of The Match could have saw Robert Heavey or Dean Fennessy, Paul Clifford was outstanding in midfield, Ver Nolan scored one and set up one for John Paul Higgins, but in the end the award for Man Of The Match can only go to the hat trick hero top goal scorer for Naas United with 14 goal tally for 2021 Dean Bowers.