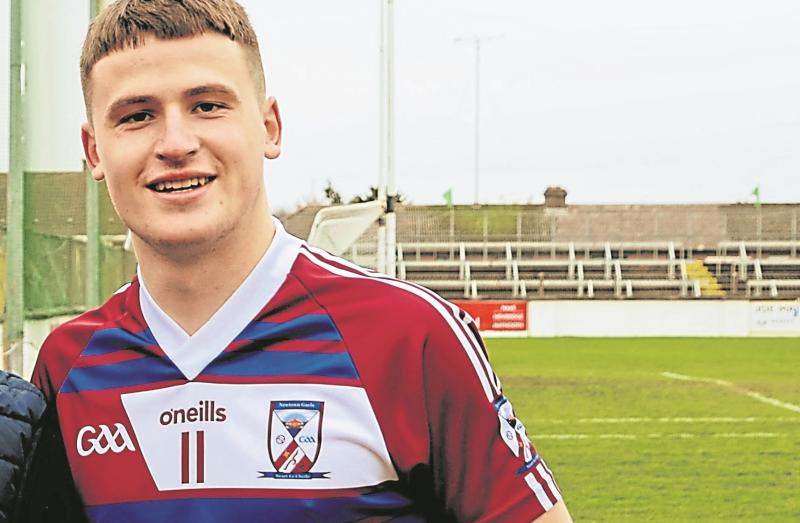 Darragh Swords, on the mark for Scoil Mhuire, Clane this afternoon

Scoil Mhuire, Clane, advanced to the semi-final of the PPS 'A' Football Championship this afternoon with a hard-earned three point win over St Mel's of Longford, played at TUS Midlands Campus, formerly Athlone IT, this afternoon.

Managed by Raheens and county man Liam Power, Scoil Mhuire held an 11 point lead at half-time, thanks to three first half goals but had to withstand a mighty comeback from Mel's and in the end it was the Kildare boys who were relieved to hear the long whistle.

Played on a lovely sunny but crisp afternoon, Mel's had most of the early play but due to some poor finishing and excellent defending could not put that superiority on to the score board. They opened with a point from danger man, Matt Carey before Alan Fanning leveled up matters on ten.

The 'home' side regained the lead, Carty again the scorer before Scoil Mhuire, who were gradually getting to grips with the game fired in their first goal following a free from midfielder Darragh Swords, it was JP Gill who got the vital flick to steer the ball over the line.

As we approached the first water break the Clane boys struck again, this time it was Oisin O'Sullivan, after a fine solo run, saw his shot partially blocked but had enough on it to cross the line and Clane now led 2-1 to 0-2, with just 18 minutes on the clock.

Scoil Mhuire were now dominating and five minutes later the ball was in the back of the Mel's net again, this time after a great move involving DJ Percival, JP Gill, Sean Tighe ended with Allenwood's Alex Lenihan firing to the net.

Two pointed frees from Darragh Swords and a point from play in between from DJ Percival saw Clane lead comfortably at the break, 3-4 to 0-2.

On the resumption it was Mel's who got off to the better start, firing over three points from Adam  Donnelly, substitute Michael Flynn and a Matt Carey free to reduce the gap to eight.

Scoil Mhuire gave themselves some relief when JP Gill added to his first half goal with a fine point. However Mel's were slowly but surely getting a grip and putting Scoil Mhuire under pressure as they pushed up on the Clane kick-out.

Paddy Moran reduced the deficit with a point as Mel's came storming forward sensing there could be something in this game for them yet.

A goal bound shot from half time substitute Conor Clancy saw Daire O'Doherty foot block the effort, the referee, after consulting his umpires, awarded a penalty, gave the Clane man a yellow and up stepped Paddy Moran to reduce the deficit to five points with 46 minutes on the clock.

On the resumption after the second water break there was no respite for Scoil Mhuire as Mel's continued to dominate and points from that man Moran again, along with a punched effort from Michael Flynn, saw the lead cut back to three with some five minutes left on the clock.

Scoil Mhuire certainly had their backs to the wall but some stout hearted defending, particularly from Alex Kehoe, Darragh Swords and DJ Percival who worked his socks off throughout, saw Clane hold out with three points to spare and book a place in the semi-final on a final score line of Scoil Mhuire, Clane 3-5 St Mel's Longford 1-8.