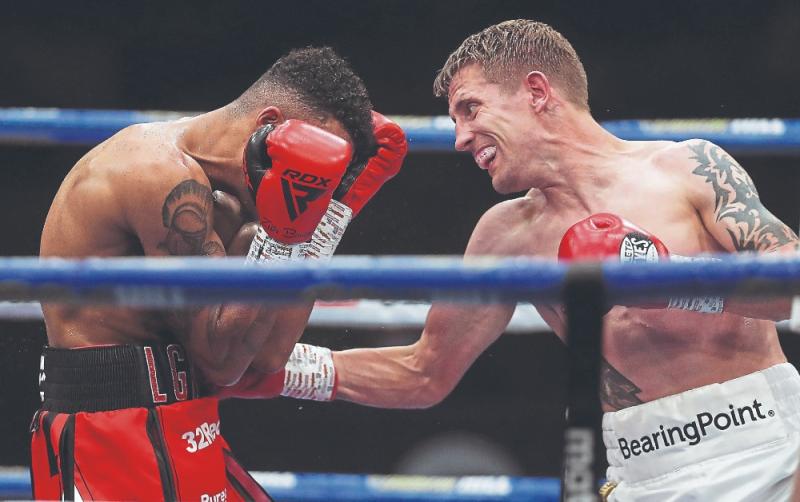 Eric Donovan steps into the ring with Robeisy Ramírez, on February 29 in Glasgow; a twice gold medal Olympic winner, turned pro in 2019, winning eight of his nine fights. Daragh Nolan talks to the Athy man on the eve of what the Kildare man says is a massive fight.

At 26 years-old, amateur boxer Eric Donovan checked himself into a rehabilitation facility with a plan to change his life. Ten years later, he is talking about his plans to capture and defend world and European boxing titles in his native Kildare.
Plenty has happened in that time and it has been as eventful as it has been inspiring.

“Boxing was my outlet, a refuge. But when there wasn't anything to focus on or train for, I inevitably fell back into the cracks because I hadn't got the support I needed in my life. It all came to a head in around 2012. I needed help, professional help, because I couldn't keep getting away with it anymore, the crutches of the drink and the drugs,” Eric described.

“I just got deep into depression and the lack of hope and desire I had. I had no hold for life, I just didn't want to be here anymore. So that was the catalyst for me to make a change. Deep down, I knew right from wrong. I wanted to be a decent human being, a good father, a good person.

“I was dealing with something so powerful that I had absolutely no control over, mental and emotional health was just all too much for me. I never knew anything about the dark (thoughts), how to talk about them, approach them or how to handle them. I had always just ran away from them and tried to escape. Beginning to understand my feelings, thoughts and thinking patterns allowed me to put a system in place to handle them.”

Eric retired from boxing in 2013. He then began a journey of personal development and growth. He completed a full-time two-year diploma course in counselling and psychotherapy. It was only with one year left of his degree that he realised he wanted to lace up his gloves again.

“I turned pro in 2016 because I just wanted to honour the gift that I was given because I did have a gift, a natural gift. I wanted to be just able to hang up the gloves in the end and say I had no regrets. I wanted to finish it with integrity, honesty, and passion. And that's what I've done,” Eric explained.

“Here I am five years later. I'm on the cusp of potentially, if I win my next fight, I could be talking about world titles.”
It has been a long road back for Eric Donovan. Not many boxers retire at 28 having never gone professional. Only to end up in the ring fighting for an inter-continental title just a few years after deciding it was time to go pro.

There was disappointment for the ‘Lilywhite Lightning’ that night but it was by no means time to go back to the couch, this was just the beginning of Eric's name being mentioned in title conversations. He had won large portions of the fight and gave the 1/7 favourite Zelfa Barrett huge problems throughout with even Barrett’s promoter Eddie Hearn admitting he was now a fan of the Kildare super-featherweight.

“Oh, it hurt man. Really hurt. I was hurt because it meant so much to me. I had worked so hard for it and I came so close. But when I think about everything I've been through and what I've done and to stand there at that level and fight with a guy of that calibre, I think it is one of the best experiences I've had in my life … and one of the worst,” he laughed.

One of the most unique aspects of the Barrett fight was the atmosphere, or lack thereof. Behind closed doors due to Covid-19, there was an absence of the roars when a big punch landed or when the athletes began to trade big blows. But neither Eric nor upcoming opponent Robeisy Ramirez will have to worry about that on February 26 when 15,000 people pour into the SSE Hydro in Glasgow. The bout will be on Josh Taylor v Jack Catterall undercard and will represent Ramirez’s first bout outside of the US.
Eric believes despite the card being a Ramirez backed show with Top Rank Boxing, that the venue no doubt works in his favour.

“It’s his show, but trust me, I will have the home support. The whole of Scotland and Ireland are going to be there and are going to get behind me, I know for a fact. I am going to relish that, that's going to mean so much to me. I can't wait for it.”

“You know it is going to be world class, this is going to be one of the biggest boxing shows of 2022. Chief support or co-main event against a Cuban legend, a two time Olympic gold medalist, this is the stuff of dreams.”

However, the Kildare man is under no illusions about what he is getting himself into with Ramirez, a supreme striker with as much pedigree as anyone in the sport today. But Eric has never minded being the underdog.

“He is a class act. He can do it all, he can brawl, he can box, he can do it all, and you don't get any higher accolades than Olympic gold medals. It's phenomenal but look, the amateur game over three rounds is one thing and the professional game over 10 rounds is a completely different animal altogether. It's going to be an extremely hard battle and an absolute dogfight at times.

“We're working on a plan. We're working on tactics. We're going to go all in to try and win this fight. Because winning this fight will open the door to so many other possibilities for me. So that's all I'm thinking about and that's all I'm preparing for. I know it's going to be hard and I know many people will probably have me down as the underdog portrayed. I've been the underdog all my life and I'm still here, I'm still punching, still fighting, and still winning. I'm still winning at life. And that's the main thing.”

A formidable opponent lies ahead, but beyond him there is no doubt with a win over an opponent of this calibre, the man who started his boxing journey at Mount St Mary's Hall in Athy will be looking at a mega fight for one of boxing’s top prizes.
Eric has great pride in where he’s from, and it is to the forefront of his mind when he considers his career ambitions and how he plans to bring professional boxing back to Kildare.

“I'd love to get a crack at a European title. I was supposed to have a shot last May and I fractured my rib in my last sparring session before I was due to fly over to Italy. That was absolutely gutting but I have two kinds of goals left. One is to win the European title. And the second one is to defend it in Kildare. The Punchestown Event Centre. That's my dream,” Eric explained.

“It's been so long since there's been a registered official professional boxing event in County Kildare and you think of the historical links with Dan Donnelly and everything, there's just so much rich heritage attached to it.

“But this is after coming into my lap in the middle of all this. So now I'm just giving all of my focus to this fight against Ramirez, because I know winning this fight will put me into world title contention. So I'm rolling the dice here once again, but I'm going into this fight with my eyes wide open. And you know, I'm ready to go to whatever lengths I have to so that I get the job done.”

Eric would like to extend a special thanks to his team of sponsors for their continued support, BearingPoint, Novo Technologies, The Auld Shebeen Athy, Liffey Crane Hire, A and A Pharmacy Athy, Smart Text, DPRC Physiotherapy Drogheda and SKF Fitness Drogheda.