The Big Interview: Eric Donovan talks his title ambitions in Kildare, family and his post-boxing plans

The Athy man chats to Daragh Nolan about European title goals, dealing with loss and what's next 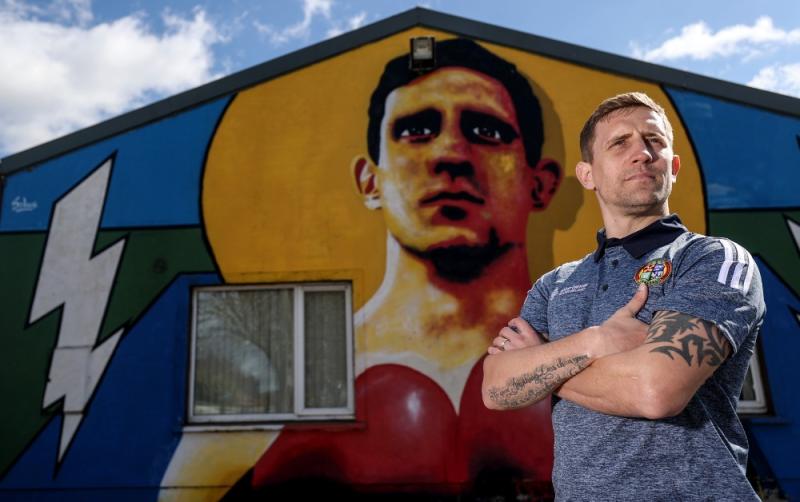 Eric Donovan at his mural at St.Michael's boxing club Athy

Boxing is a sport obsessed with wins, losses and the maintaining of a spotless record. The expectation of never suffering defeat at the top level inevitably trickles down to the fighter’s but Eric Donovan has learned to transcend that dangerous connection between disappointment in result and sense of self worth.

“I remember losing big fights to qualify for the Beijing Olympics and I used to feel like a waster and loser. The outcome of the match would define me as a person but coming out of the Hydro Arena in Glasgow, I was hurt, upset and defeated but I never felt like a loser,” Eric said.

“I am bitterly disappointed in how the Ramirez fight finished but there is no shame in losing to him; he's one of the greatest ever. I never anticipated the fight being over so quickly, the least expectation was to go the distance. I was going to give him a run for his money.”

Eric was defeated by Robeisy Ramirez in February via third-round stoppage. There were many aspects of the bout that frustrated the Kildare man. The phantom knock down caused by a loss of balance in the first round invoked a referee’s count “annoying but more than that it felt embarrassing really.” Add to that a cut that opened above Eric’s eye in the second began to leak blood into his eye in what was a competitive round.

“The finishing punch in the third round was a good punch but it was my own wrongdoing. I turned away from the punch and exposed the back of my head to it. The punch landed behind my ear and it's the most vulnerable part of your head,” Eric explained.

But being disappointed in your performance and not allowing that to dictate your self worth are not mutually exclusive. Eric, his manager and coach Packie Collins sat down after the dust had settled and evaluated where they were.

“Packie was the first to tell me don't go out like that because you are better than that. I have stepped up to world level twice, I nearly got it done against Barrett and less so against Ramirez but maybe world level is a bridge too far at my age. I am at the end and these guys are in their prime,” Eric described.

Eric announced two weeks after the Ramirez fight that 2022 would be his last year as a fighter. However in many ways, the defeat did not alter Eric’s plans, this writer spoke to Eric prior to the Ramirez bout where he discussed his desire to get a European title shot.

He had already signed to fight for one but a cracked rib in his last sparring session before the bout put his title ambitions on hold. Now post-Ramirez Eric is not just eyeing the title shot but to also bring the bout to Kildare and the Punchestown event centre.

“I dominated domestically and a European title is well within my reach. I am in the top 10 of the European rankings. European was always the goal but I got those two opportunities to step up to World level and I jumped at them. It’s almost back to plan A now,” Eric said.

Eric’s plans are all very much contained with 2022. He is adamant on his desire to retire after this year and with his roles outside of the ring as a guest speaker reaching nationwide he has plenty of options of what to do next.

Eric in his guest appearances discusses his story and personal evolution, which far from ends at age 36 and he is now for the first time seeing those around him show concern for the dangers of the sweet science.

“The (Zelfa) Barrett fight never gave anyone close to me reason to be concerned because I got caught but I was boxing out of my skin and winning the fight. With this fight I felt the people around me see how potentially dangerous this game can be. They can see the brutal nature of the sport and the damage it can do. You don't play boxing,” Eric described.

“My family and my loved ones just don't want to see me hurt. I don't want to see anything happen to them or any of my children so I can't imagine what it is like for them. I am trying to understand how they feel. But when I am in there I am a fighter.”

Towards the end of any career the natural instinct is to reflect and during all the discussion of high points and low points but Eric uttered a line that cut through it all and gave a true perspective on what matters: “10 years ago I was on my knees in rehab, a broken man, to be where I am now is incredible.”

Eric is happy about where he is outside of the ring and that supersedes all else. But there is still that final run to attend to. We are now just a few weeks out from the Lilywhite Lightning’s return and he is back in familiar and successful territory.

Eric will fight on May 14 in the Europa Hotel, Belfast against an opponent who is yet to be announced. The Belfast venue is the site of his last win when he beat Hungarian Laszlo Szoke via TKO.

“I’ll be headlining and it will be a sell-out because it's a smaller show. I am excited to get back in there because you are always thinking of your last fight when it doesn't go your way.

“My last fight was a disaster but going forward looking at it I don't think anyone in the world is going to beat that guy. But I just want to put it out of my system.”

There is only the remainder of 2022 left for Kildare’s premier boxer. But even with the retirement plan in mind, there are still a few stops he wants to make along the way.