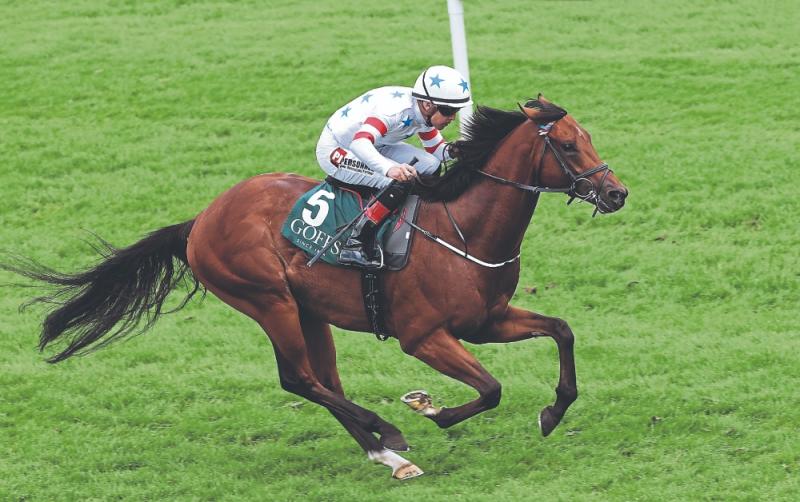 Aidan O'Brien recorded a treble at Naas on Sunday and it was Seamie Heffernan who got the ball rolling for the Ballydoyle trainer when taking the opening five-furlong race on The Antarctic.

A maiden winner at Tipperary, he was a 4/9 favourite to follow up and did so with a battling success over the Michael O'Callaghan trained Mehmar.

Michael O'Callaghan saddled easily the most impressive winner of the day as Twilight Jet won the Group 3 Goffs Lacken Stakes under Leigh Roche. A 9/2 shot, he made all the running to score by three lengths from the Aidan O'Brien-trained 6/5 favourite New York City, a fair effort on his first outing since Breeders’ Cup in November.

Two Curragh trainers made a flying start at Navan on Saturday when taking the opening maiden races with two impressive winners.

Michael O'Callaghan was first up as he landed the two-year-old event with Harry Time, the Leigh Roche-ridden 4/1 chance scoring a cosy success from the Aidan O'Brien-trained Broadhurst in the trainer’s own colours.

Willie McCreery saddled newcomer Charlemont to win the three-year-old maiden by all of five lengths under Billy Lee. The well-supported 2/1 favourite was well on top with over a furlong to race and he eased clear to win from the Edward Lynam-trained Gobi Star, again the winner carried his trainer’s colours.

Gary Carroll and local trainer Gavin Cromwell won the 13-furlong handicap with Isaiah which is owned by John McNally. The 12/1 shot was having his first start for the stable and he came home a four and three-parts of a length winner from the John McConnell-trained Mythical Times.

Ronan Whelan was a winner again at Leopardstown on Friday evening where he partnered the Andy Oliver-trained Mandbehindthemoney to a narrow success in the eight-furlong median auction maiden.

The 11/2 chance only led in the final strides as he edged out the Johnny Murtagh-trained Free To Party by a head.
Jessica Harrington hasn’t been enjoying the best of luck but she sent out Supagirl to win the fillies’ handicap over 10 furlongs. The 11/2 shot made most of the running under Shane Foley to beat the Donnacha O'Brien-trained 7/2 joint-favourite Simply Glorious by a length and a quarter.

Kilbeggan’s opening race on Friday went the way of the Peter Fahey-trained Backing Band. Ridden by Kevin Sexton for owner Bernadette Leigh, the 25/1 chance headed the front-running Allbetsoff after the final flight and went away to win by a length and three-parts.

Luke Dempsey landed a 20/1 success at Clonmel on Thursday where he partnered the Gavin Cromwell trained Steppen-
wolf to win the opening division of the two-mile three-furlong handicap hurdle. It was all too easy for the Bricks & Beer Syndicate owned four-year-old which went clear over the final hurdle to score by six lengths over the Jimmy Barcoe trained Frazel Express.

Ken Condon supplied another winning favourite in the shape of the Roving Swan Partnership-owned Warren Beach which scored an easy success in the opening seven-furlong median auction maiden at Gowran Park on Wednesday. The 15/8 chance led before the end of the back straight and made the best of his way home for a three-length win under Billy Lee.

Five lengths was the winning margin as the Johnny Murtagh-trained Miss Mirabell landed the eight-furlong fillies and mares’ maiden under Ben Coen. A strong even money favourite, she made all the running and was nicely clear before the furlong pole to beat Dermot Weld’s 2/1 chance Shamiyana in fine style.

Murtagh completed a double, in the very next race, as the Danny Sheehy-ridden New York Angel beat Ken Condon’s Needle Lace by a length and three-parts in the fillies and mares’ handicap over the same distance. The 13/2 chance, in the colours of owner Mark Dobbin, was another to make all the running and she scored with plenty in hand over the 16/5 favourite.

Ronan Whelan won the opening division of the nine-furlong handicap on the Ado McGuinness-trained Alhaajeb at odds of 20/1 and Seamie Heffernan took the second leg of the same race on Martin Lynch’s 20/1 chance Leabaland. A good day for the Kildare brigade was completed when Johnny Feane and Jamie Powell won the three-year-old handicap over the same trip with Urban Oasis which is owned by Reggie Roberts. The 100/30 favourite was the narrowest of winners at the track a week earlier but it was very different this time as he raced to a five and a half-length victory over the Jessica Harrington-trained Rock Of Candy.

Curragh trainer Brendan Duke saddled Darraby to win the concluding 12-furlong handicap which completed a first and last race double for Kevin Manning at Roscommon on Monday. In the trainer’s own colours, the three-year-old got on top inside the final furlong and pulled away. Manning had earlier taken the median sire auction series maiden on the Jim Bolger trained 4/5 favourite Comhra.