Interview: Kildare's Eoin Doyle on his heartaches and hopes 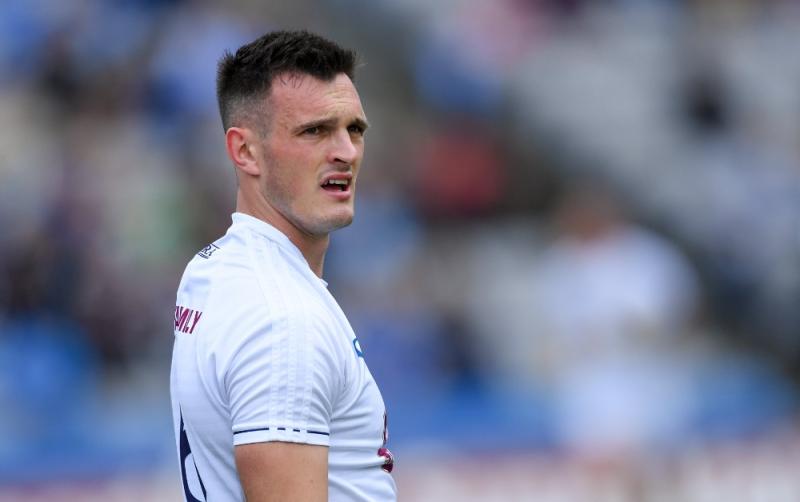 Just ten days or so before the Leinster final of 2021 we sat down with Kildare defender, former captain and Naas player Eoin Doyle to look ahead to the upcoming clash with Dublin.

Eoin, had unfortunately been ruled out with a major hamstring tear for that game. Ten days before this season's decider we met Eoin again, but again the teak tough defender will be sidelined for the big game following injuries initially picked up in the Leinster Club final earlier in the year but then having finally shaken off a groin strain returned to full training the week before the Mayo league game, he takes up the story.

“The week before Mayo match was my first full week of training and then I just landed awkwardly on it and tore the PCL; I have a lot of injuries but never a knee before , unlucky, these things happen but as I said, I am very much on the road to getting back; on the right side to where I need to be and hopefully within a couple of week can step up to full training again.”

Unfortunate is a word Eoin uses on more than one occasion during our chat; I can think of a few other words that might not be as family-friendly but as he says himself “very tough ye, unfortunately the presence of injuries has been part of my career for a long number of years, which is very frustrating and hard, particularly last year I missed the Leinster final and again this year, that's just the way it goes but I'll be happy once the lads get over the line, that's the main thing.

“I have been involved for a while now, along with a lot of the other core lads that are there for the last number of years, all we want to do is to get to the pinnacle and win a Leinster title and beyond, so hopefully we can manage that on Sunday.”
Eoin Doyle has been involved with Kildare at this level for nearly a dozen years and during that time Kildare have reached three Leinster deciders; 2017, 2021 and again on Sunday.

Doyle lined out in 2017, but with a broken finger, while as said already he has missed last years and this year's finals.
Talk about bad luck.

The last game the Naas man — who managed his club, along with Eamonn Callaghan to senior success in 2021, going all the way to the Leinster Club final before losing out to Kilmacud Crokes — was that club final back in January, that gives you an idea of the frustration this popular defender has suffered in the last four months.

“I am on the right track now, but if you asked me that six weeks ago I would have said nothing as I was in a brace but in the last three or four weeks I have been jogging and that kind of stuff, back on the pitch, doing different bits, just trying to keep ticking over; a while since I trained fully; a while since I actually played football because I only came back from a groin injury during the league, it was only my second session and this happened (PCL).”

Like most players Eoin does not enjoy sitting out games, does not really enjoy watching, naturally would much prefer to be playing but having said that he thinks “the lads are going well, good momentum there, the league obviously we went down and I am the last person who would be over- positive.

“You hear a lot that we had good performances but we also had good performances the last time we were in Division 1 but still went down; really it doesn't matter if you had five points or no points, at the end of the day you are relegated regardless” adding, in fairness you have to look at it on its merits, there were a lot of good performances and that is where the momentum has brought us to at the minute.

“We are scoring very well at present but was that Westmeath game the most intense game we have played?
“Was it like a real championship game?
“Probably not, but it's probably the best way to be going into a Leinster final, fully aware there is a lot of room for improvement; you can't go into the final thinking that game against Westmeath was good enough; but it gives the management a stick to beat us with knowing we have to step up considerably on that display.”

As for Dublin, Eoin acknowledges that “Division 1 did not go Dublin's way this year but that can happen, you can get into a bit of snowball effect going upwards — and going downwards — but they will be fine; just look at the talent they had on the pitch against Meath; experience and talent, we will have to be at our best.

“Our management will have all their work done but it is all down to the players, they need to turn up on the day and ensure we deliver on what we can and if we do that, at least you can leave knowing we gave it our very best shot; there may be days gone by when we left knowing there was maybe more in us but it didn't show, that is something that we can't allow happen this time, and I firmly believe we won't.”

As for the perception that Dublin are in decline, Eoin insisted 12 months ago that he did not believe they (Dublin) were and is still firmly of that opinion.

“In many respects that perception is probably still there, even that they may have regressed another notch, hard to say how well they were tested against Meath in their semi-final; did they obliterate them or did Meath roll-over and while that may be the case,” insists Eoin “remember Dublin can make any team look poor very easily, they are still Leinster champions; Dublin were not far away from another All-Ireland final last year, so they are far from a spent force, far from it.”

New management, and the buzz and momentum that Glenn and his lads bring to the set-up, any different?
“Not sure what you would say is different but they are so just demanding what they need to demand, in a manner that players are working hard, the very basics and the lads are certainly responding to that, no doubt about that.

“These lads (management) have massive history in Kildare; the older players would have seen them playing and look up to them, they are doing everything that is being asked of them but does it (new management) count for anything on the score board?

Absolutely not — unfortunately — but the response from the players has been excellent; everyone is going in the same direction, players, management, Co. Board, supporters it all creates great momentum and that is there at the moment and we have to capitalise on that.”

How Kildare beat Mayo to lift the Christy Ring cup

Split season
Eoin is very much in favour of the new split season but admits that while it certainly brings some clarity for the inter-county players, it still leaves the club players with a very, very long season.

“I think from an inter-county players point of view it definitely adds certainty to where you are at different times of the year; for a while as an inter-county player you could be back in October, if not before, and depending how your club did you could be stretching on into November and even December, that's nearly 12 months; the Moorefield boys would have had that for three or four years in a row a while ago and that is very tough going but the way the inter-county is set up you know exactly where you are whatever month, all going well and you can base your club scene around that.

“I do think the club lads still have a very long season, they are mostly back in January and you might not finish up until September or October, so still very long for those players, but that is up to each club and each club manager to sort out and how they can deal with that.”

But for now Eoin Doyle continues on his recovery, hopefully he will be back and get an opportunity to don the white this season, if not he will certainly be ready for his club as they set out in defence of their senior title later this year.
Eoin Doyle has gone through a very bad patch with injuries in recent times but insists “it's all part of sport, all part of the game.”

Kildare (and Naas) need Eoin Doyle back to full fitness, now 30, he still has plenty of time and with his skill, determination and will-power we can look forward, with confidence, to seeing him return to action sooner rather than later.