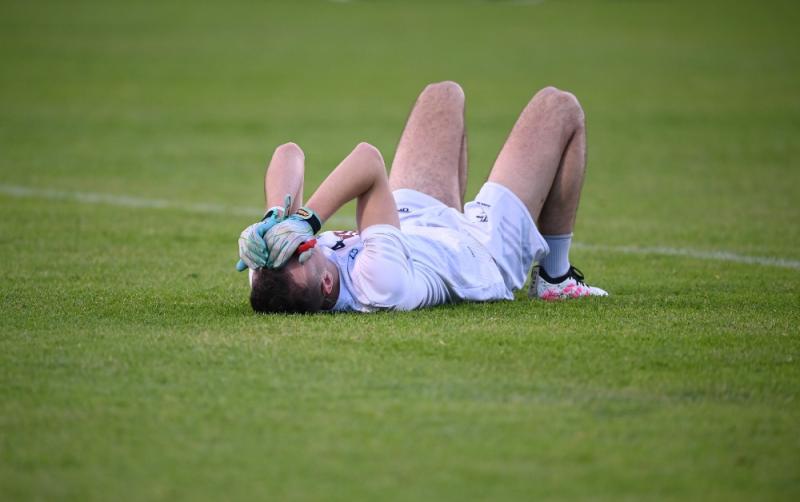 Kildare travelled to O'Moore Park, Portlaoise, on Wednesday evening last for a clash with Dubllin in this year's Electric Ireland Leinster MFC decider, and travelled with much confidence following some top class displays culminating with an excellent performance against Wicklow in the semi-final.

Conditions were not ideal, with a lot of rain less than an hour before throw-in and while the rain ceased conditions were certainly testing with a strong wind blowing into the town goal, favouring Dublin in the opening half, slippy conditions and it all led to a lot of miss-handling, slipping and sliding from both sides.

A slow burner in the opening thirty minutes and while Kildare opened the scoring with a fine point from Joey Cunningham, Dublin took control and while finding the target proved difficult at times, Dublin hit four wides in the opening ten minutes.
Paul Reynolds Hand opened for The Dubs with corner forward, Joe Quigley getting the first of his three first half points on ten.
Ryan Sinkey found Killian Brown inside, took a mark but failed to convert.

Dublin hit another wide but awarded a free and Joe Quigley found the range to lead 0-3 to 0-1 as we reached the half-way point.

Ben Loakman picked up a harsh yellow card before a ball inside was collected by Eoin Cully, who was fouled and Killian Browne reduced the gap to one.

Some dubious decisions had the Kildare fans roaring their disapproval as Dublin increased their lead to two, Joe Quigley converting a free.

Kildare hit back with TJ Nolan linking up with Ben Loakman but the Sarsfields man effort was blocked by the feet of Dublin keeper David Leonard for a 45.

Up stepped Killian Browne with a brilliant kick into the strong wind to leave just a point separating sides.
Kildare showed signs of stepping up a gear, a ball in by Ben Ryan saw Ben Loakman fouled again but this time Browne's effort just tailed off left and wide.

Killian Browne hit third free to level up on 29 minutes and just before half-time he had The Lilies in front after a foul on Joey Cunningham, the Celbridge man made no mistake.

Kildare in front at the break 0-5 to 0-4 and considering the strong wind that would be in their favour on the resumption it was certainly a great position to find themselves in, especially after Dublin having so much possession throughout that opening period.

However, on the resumption it was Dublin who grabbed the initiative. Introducing two half subs in Oscar Donoghue and the influential Clyde Burke, they leveled up in side the opening minute through Luke O'Boyle, then three minutes in a sweeping move the aforementioned Burke put Ryan Mitchell in on the goal and the Erin's Isle man made no mistake giving Fintan Quinn no chance as Dublin now led 1-5 to 0-5.

Kildare were suddenly under pressure and a minute later Paul Reynolds Hand converted a free to stretch that lead out to four, with just five minutes gone in the second half and Kildare yet to score.

Seven minutes in and Killian Browne converted a free but Dublin were now showing signs of that famous swagger and Paul Reynolds Hand added another free.

Dublin then hit two dreadful wides from close range, add in another that dropped short before Clyde Burke left five in it mid-way through.

Kildare were in big problem at this stage. They found it difficult to mount any meaningful attack with Killian Browne the only one causing any problems to the Dublin defence and it was Brown who added another free for The Lilies after Cillian Geraghty was fouled.

Dublin looked to have a second goal but Tom Kelly got back to clear off his own goal line and soon after Dublin's David Mulqueen was denied by Fintan Quinn in the Kildare goals.

Little was going right for the boys in white, their shape was gone and were playing second fiddle all over the field.
On 53 minutes s Eoin Cully was first to react to a ball over the top and as he advanced so too did David Leonard in the Dublin goal. The players clashed, Kildare looked for a penalty but referee Coyle waved away the protests much to the annoyance of the Kildare players, management and fans.

Clyde Burke, Charlie McMorrow added points before Luke O'Boyle was first to react to to a loose ball to fill the Kildare net and while Killian Browne converted a late Kildare free, it was not enough as Dublin captured the title, and deservedly so, on a final score line of Dublin 2-10 Kildare 0-8.

From a Kildare point of view a very disappointing, not only result but performance. Without ever reaching the highs we have seen in earlier rounds they led at the break by one but simply failed to turn up for the second half.
Hard to put one's finger on the cause; maybe it was felt they had it in the bag with the strong wind on their backs in the second half, but it was Dublin who took the game by the scruff of the neck and like all Dublin teams when they get their tails up they simply, grow and grow in confidence.

Kildare now meet the Connacht champions in an All-Ireland quarter-final and while there is no doubt they are a better team than what we saw on Wednesday, manager Niall Cronin and his management will have a major job to lift their players for game scheduled for a few weeks time.

How Kildare beat Mayo to lift the Christy Ring cup

From a Kildare point of view, the highlight was that they led by a point at the break, that despite playing against the strong wind, and while Dublin had the vast amount of possession in that half, they found themselves trailing by one at the interval.

Without a doubt the second half performance when Kildare simply did not turn-up; played second fiddle throughout the field and were somewhat fortunate not to concede at least one more goal.

Whatever happned in the Dublin dressing room at the break certainly had a major effect on their play as they suddenly played with an urgency and had Kildare all but dead and buried soon after the restart.

Killian Browne was Kildare's main man, scoring seven of the eight points but all the main men were wearing blue.

Killian Browne was Kildare's main man, scoring seven of the eight points but all the main men were wearing blue.

A back-door gives Kildare an opportunity to show they are a better side than this, they now take on the Connacht champs.