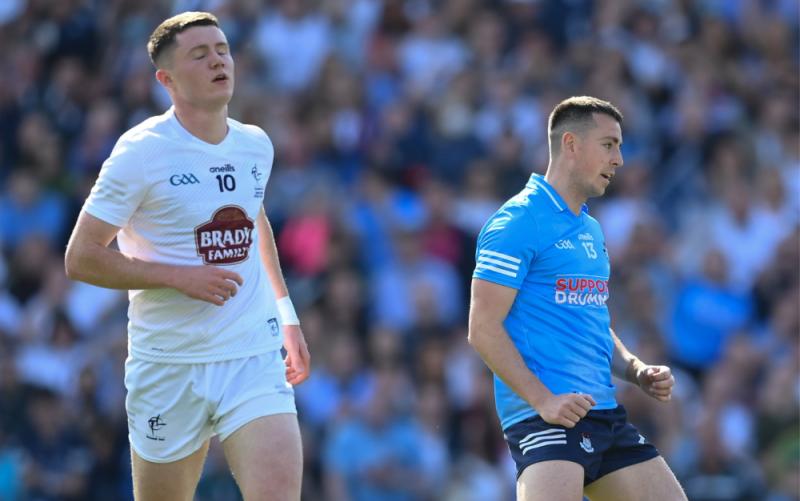 Cormac Costello of Dublin celebrates after scoring his side's second goal during the Leinster Final match between Dublin and Kildare at Croke Park,Photo by Stephen McCarthy/Sportsfile

Fourteen points separated Dublin and Kildare, but it could have been anything such was the dominance of Dessie Farrell's side as they simply demolished Kildare with five first-half goals in Saturday's Leinster Senior Football Championship decider at Croke Park.

It was, without doubt, a devastating display from The Dubs, they dominated all over the pitch, played with purpose and intent, their pace and their power were simply too much for Kildare with the game all but over as early as 16 minutes after Cormac

Costello danced his around around Kildare defenders and goalkeeper before blasting to the net. It was a joy to watch, provided — that is if you were not a Kildare supporter.

As for The Lilies, well their were signs against Westmeath that all was not well, particularly at the back, the defence was not playing as a unit, the way modern game is played these days, and as Glenn Ryan has said over the over again, everyone is a defender regardless of what number is on their shirt, that, just like the semi-final was not the case, albeit against probably the best attacking unit in the game, if this display is anything to go on.

Kildare opened with a Paul Cribbin point — the first and only time they were in front — after three minutes but that lead lasted a mere minute as a sloppy tackle saw Dean Rock fire over the first of his four frees to level it up.

Dublin took just one more minute before they showed one and all what they are capable of with Con O'Callaghan linked up with Ciaran Kilkenny and the Castleknock man gave Mark Donnellan no chance as Dublin took the lead, a lead that was to grow and grow as the first half developed.

Influential midfielder Brian Fenton raised the first of his three white flags a minute later and one more a minute further on and Mark Donnellan was again taking the ball out of the onion sack that coming after a point attempt came off the upright into the hands of waiting Cormac Costello who finished in brilliant fashion making it 2-2 to 0-1 with a mere seven minutes on the clock.
And so the very start that Kildare were hoping to avoid, a start that had them (Kildare) on the back foot before they even got up and running while for Dublin they, no doubt, hoped to put The Lilies under early pressure and this they did in brilliant fashion.

Ben McCormack, Kildare's best player by a country mile, left John Small for dead before splitting the posts, Kildare hit a few wides, Dean Rock converted a free while Paul Cribbin left a long-range effort short and into the arms of Evan Comerford.
And it didn't stop there as Dublin continued to threaten with every attack. On 16 minutes Costello danced around the danger area, a few defenders and keeper Donnellan before hitting the rigging — 3-3 to 0-2 with just minutes of play gone.
Daniel Flynn found Ben McCormack and the Sarsfields man fired over but Dublin replied again almost immediately, this time John Small, leaving his defensive duties temporarily aside, came storming forward to give Donnellan no chance as Dublin led 4-3 to 0-3.

Kildare vs Dublin; "We felt embarrassed...you just wanted to be anywhere but Croke Park"

Daragh Nolan recounts a day to forget for the Lilywhites

Dublin were showing all the skills at this stage, it matter little what number they were wearing, defender, forward or midfielder, they were simply superb.

Kevin O'Callaghan worked hard to gain possession, slipped, before a frustrating tackle on John Small saw the Celbridge man pick up the first yellow of the day.

Corner back, Lee Gannon, added the first of his two points on 21 minutes before Dean Rock landed a free on the 45m after another half-hearted tackle was punished.

Kildare's wide total hit seven with some very poor shot selection before Darragh Kirwan found the range but there was more to come from Dublin as Cormac Costello added his second and Dublin's fifth goal on 26 minutes to leave the score reading 5-5 to 0-4.

Magnificent stuff from the boys in blue as Kildare had simply no answer to their power and pace.
Daniel Flynn found Kevin Flynn who took his mark and converted before the Johnstownbridge man went on one of his mazy runs, passing bodies one after another before running out of runway and blasting left and wide of Evan Comerford's right hand post.

Brian Fenton added a point for Dublin, Jimmy Hyland landed a beauty from an acute angle but the final score of the half arrived on 33 minutes, this time no. 4 Lee Gannon getting forward again to leave the half time score reading Dublin 5-7 Kildare 0-6, and that with none of the Dublin forwards scoring a point from open play — an indication that their strength lies throughout their team and not just the front players.

Despite conceding five goals Kildare waited until half time before making a couple of changes but in fairness who to take off could have been any of five or six (at least) but when they did settle on what do there was certainly some eyebrows raised when corner forward Kirwan, along with James Murray were replaced by Paddy Woodgate and the forgotten man of the 2022 season, David Hyland.

Jimmy Hyland fired over a free after Tony Archbold was fouled having been put through but found himself surrounded by three Dublin defenders.

Daniel Flynn found Kevin Flynn on his right who in turn spotted Jimmy Hyland and he duly punched to the net.
Niall Scully, a beauty from Ben McCormack and another from Con O'Callaghan kept Dublin in firm control.
Kevin Flynn was black carded as we reached the 55 minute. The next four points were evenly divided before Con O'Callaghan got the final point of the game, Dublin winning 5-17 to 1-15 and another Leinster title.

HIGHLIGHT
From a Kildare point of view there were few and far highlights except the display of Ben McCormack who worked his socks off, gave the Dublin defence much to think abut as he scored five points, four from open play and one mark.
From a Dublin point of view so much to admire. Their display in the opening half was absolutely breath-taking as they destroyed Kildare time and time again.

LOWLIGHT
The amount of times the Kildare defence was pulled apart, opened up as Dublin went through them with consumate ease; in the opening half one shuddered every time Dublin got inside the Kildare 45.

REF WATCH
Paddy Neilan in control at all times in game that presented him with no major problems.