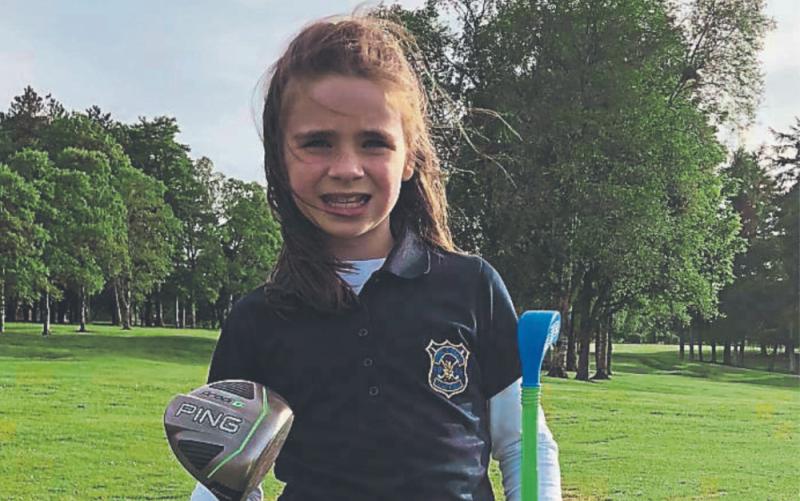 Ella Kenny is heading to the US Kids Golf Tour

When James Kenny’s two-year-old daughter Ella looked up at him and pointed towards a bat and ball, he didn't think much more than that it was a handy present that would not set him back too much. He certainly couldn't have imagined her time with the bat and ball would begin a journey of exceptional accomplishment in the sport of golf.

Over time she began to swing the bat like a club, the bat turned into a plastic pitching wedge and evolved then to her first set of metal clubs at the ripe old age of four.

And four years on from her first proper clubs Ella is heading to Pinehurst, North Carolina for the US kids World Championships in August.

Her father James explained what got Ella into this prestigious event.
“She entered the Irish Open for the US kids and if you did well you qualified for the America trip, she won that by 42 shots. Her ranking was high after that and after a couple more wins in the north she got the invite to the US tournament.”
But there has been a lot of work that has gone in before that achievement.

Before you think this is a classic pushy-parent scenario training their prodigy, neither James nor his wife had any prior connection to golf. If you can believe it, it all came from the bat and ball.

“We were out on the driving range when Ella was three. She had a super swing and was drilling balls, people kept coming up to watch and compliment her. Then we tried putting and we had to put a lot of work into that, it hasn't all been plain sailing,” James laughed.

This is a trend that continues when telling Ella’s story.
Many people have been shocked by the ability of someone so young and who could blame them. Ella and her father visited their local pitch and putt club, Athgarvan.

Unfortunately they did not take any members under six. But undeterred by the news a four-year-old Ella asked if she could tee off one shot. It landed a couple feet off the green much to the amazement of on-lookers.
Treasurer Declan Power watched on and said ‘I’ll sort the membership, dont worry about it.” 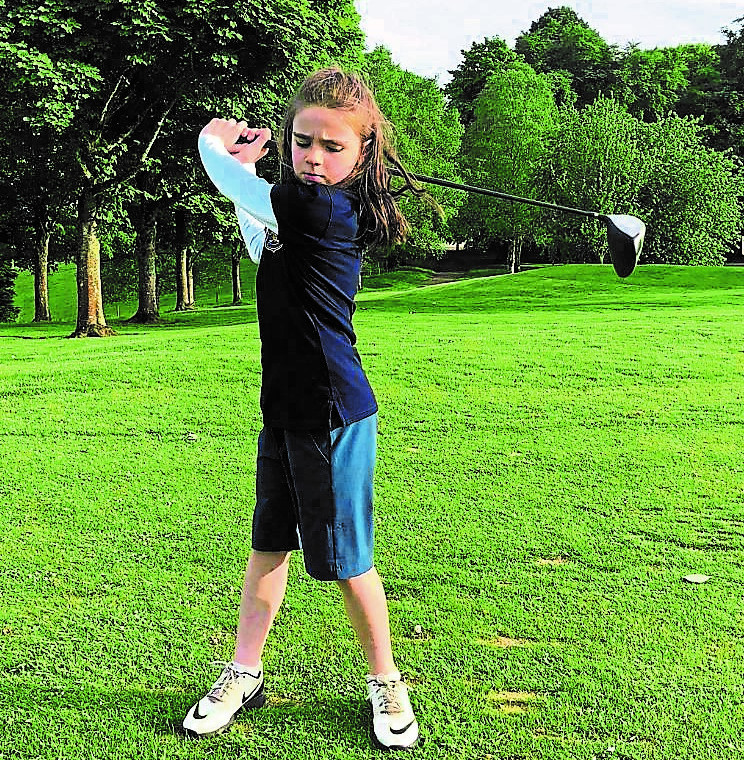 Ella joined and later that year her and her team were competing in the club’s Christmas turkey competition. They came second but Ella explained later that the loss was somewhat tactical on her part.

“I told my dad after that tournament that I missed shots on purpose because I didn't know what we were going to do with a live turkey running around the house,” Ella explained.

After an eruption of laughter in the Kenny household, James explained that the turkey wouldn't have been alive at the time of the presentation. Ella understood and went on to win the competition the following year with her team after assurances from her family the prize was not a new pet.

This piece being written about Ella right now is not her first time in the spotlight. Two years ago she appeared on the Late Late Toy Show to show off her chipping skills and after impressing the crowd and host Ryan Tubridy she got the chance to meet her hero Shane Lowry. The signed cap and shirt sit proudly in the Kenny household.

Parents can often be the hardest to impress but James said the penny finally dropped with him in regards to Ella’s ability during the first competition.

The Irish kids tour, hosted in Killeen Castle, Co. Meath. The youngest girls were grouped in the category of U10’s, Ella being five most certainly fit into that one but a tough task against kids much older than her.

“I always knew she was good but I knew something was up when she was six shots in the lead after three holes against the older girls,” James recalled.

Ella came fourth after some unfortunate bunkers but it was an incredible showing considering she had never played on a golf course before that day. She had not seen let alone navigated a bunker yet.

After that it was time to see what they could do about getting into the Royal Curragh Golf Club. James and Ella were playing on an empty stretch of grass to practise hitting balls when they met the club captain Tom Powell.

It would prove a familiar story to Athgarvan when Tom saw Ella strike a ball he approached the pair and asked in James’ words “what’s the deal with the kid?”

An exception on her age was made and Ella became the Royal Curragh golf club’s youngest ever member at five-years old.
I asked Ella what her future plans were and whether she fancied going pro, the answer was simple and conveyed her message perfectly, “Yes. I want to go pro.”

She is taking steps to do so off the course, alongside winning countless competitions (and her last 10 in a row) Ella is getting the highest quality of training from Shane O’Grady, the coach of current Irish golfing star Leona Maguire.

“The way I found it was I googled Irish female golfers and wanted to find out who was coaching them. I found his email and reached out to him, and we went there for a mini-trial and Ella has been going to him every two or three months,” James explained

“He always has stuff for her to work on, she loves going but hates leaving because she leaves with so much to work on.”
Ella echoed this sentiment by adding that it’s like getting homework when she comes back from the coaching sessions. As well as taking in advice on her own game Ella has turned her hand to coaching her younger brother Ethan too.

During the pandemic it was time to get creative and golf like every other sport was halted for extended periods of the last two years. James saw an opportunity in his mother’s house in the form of an underutilised garage.

“It was a garage that wasn't being used, things there were just gathering dust. I had an idea on top of the fact we are in a windy and rainy country that buying a simulator would be good,” James said.

“I bought the machine and it was more expensive than my car at the time and I was thinking ‘holy god what am I doing’. Once I bought it, I had to go through with doing up the garage.”

“But it’s all been worth it,” Ella interjected with a big smile.

The golfing prodigy was also quick to quantify her statement too. She explained that her big strength is her huge drive and after that it is much easier to rack up great scores.

“I can take out half the course with one drive,” she added.

Those hours of hard work on driving ranges, courses and in renovated garages are now taking Ella across the Atlantic for the US kids tour. I know her club teammates and everyone in Kildare will be behind her and hoping those textbook long drives can give her a great chance of success.

There are still plenty more competitions left to go before August rolls around as Ella competes in the Champion of Champions World Championship (try saying that three times fast) and the Irish kids Tour Ulster competition.