Kildare Racing News: Wednesday at the Curragh and 100/1 winner in Listowel 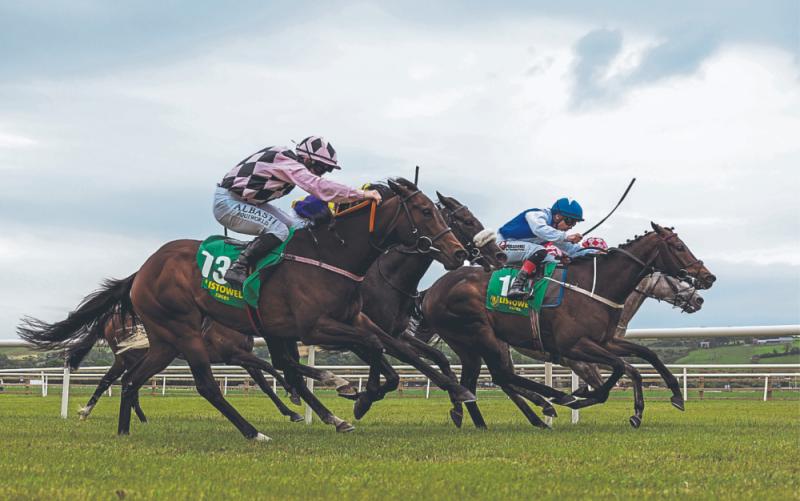 There was an early setback for punters at Listowel on Sunday as 100/1 chance Ti Sento made a winning debut under Ronan Whelan in the opening six-furlong maiden for two-year-olds.

There was no fluke about it as Ado McGuinness’ charge scored a three-length success over the appropriately named Donnacha O'Brien trained runner-up, Blindsided.

Jessica Harrington took the seven-furlong handicap with 12/1 chance Princess Raaj which she owns herself. Ridden by Alan Glynn, the three-year-old added to a recent wide-margin Sligo success when beating the Aidan O'Brien-trained Galleria Borghese by half a length.

Seamie Heffernan continued the good recent run of Tony Martin when partnering Buckman Tavern to a comfortable win in the two-mile handicap.

A 2/1 chance, the six-year-old headed the front-running 15/8 favourite Jon Snow inside the final furlong to win by a length and a quarter.

Andrew Kinirons took the eight-furlong maiden with 6/4 favourite Elmos Fire, a win that saw Billy Lee open up a two-winner advantage in the jockeys’ championship. Leading early in the straight, the Thomas Koehler-owned three-year-old beat the John Murphy-trained Hotrocket, ridden by the championship’s early pacesetter Colin Keane, by three and a half lengths.

Listowel Saturday
Willie McCreery sent out the Michael Fahy-owned Amirat Alward to win the six-furlong handicap at Listowel on Saturday. Billy Lee made all the running on the 11/1 chance which got the better of the Seamus O’Donnell trained Theriver-
runsdeep by a length and three-parts.

Ken Condon was another Curragh trainer in the winners’ enclosure as Warren Beach took the seven-furlong rated race at odds of 6/5 favourite.

Another all-the-way winner under Billy Lee, the three-year-old beat the Joseph O'Brien-trained Perfect Thunder by a length and a half in the Roving Swan Syndicate colours.

Jarlath Fahey won the second division of the seven-furlong handicap with Grigadale which is owned and bred by Paul Hyland.
A 20/1 shot in the hands of Leigh Roche, he led in the final strides to score by a shorthead from the David Marnane-trained Inchiquin Star. Jessica Harrington and Shane Foley were winners again as Ha Ha Ha had the last laugh in the eight-furlong fillies’ maiden.

Owned by the CBR Partnership, the well supported 2/1 joint-favourite led inside the final furlong to win by half a length from the Fozzy Stack-trained Tawney Coster.

Dick Brabazon and Kildare Town apprentice Jamie Powell landed the concluding eight-furlong maiden with 9/2 chance Apple Of His Eye which is owned by Leon Carrick and Michelle Gibbons. It was a cosy success in the end as she stretched clear deep inside the final furlong to win by two lengths from the Hilary McLoughlin-trained Ms Eagleton. It was the winning rider’s fourth success of the season.

Down Royal
Ross O'Sullivan and Eadestown amateur rider Tom Haney combined to win the four-year-old bumper at Down Royal on Friday evening with Champella. Owned by the Sarsfields Racing Syndicate, the well-supported 100/30 joint-favourite hit the front with over a furlong to race to beat the Thomas Gallagher-trained Love At Sea by a length.

Meanwhile at Leopardstown Johnny Murtagh and Ben Coen shared two winners on Thursday and by the end of the night were not all that far off completing a treble. They began the session with a win for the Aga Khan-owned Sheyya in the seven-furlong fillies’ maiden, the 14/1 chance well on top as she beat Joseph O'Brien’s Madly Truly at odds of 14/1.
The double was completed as 4/1 shot Chicago Bear won the nine-furlong “HRI equuip” People Behind The Moments Handicap.

The four-year-old led over a furlong from the finish and held off the late run of Willie McCreery’s Coill Na Sionainne by half a length. But their luck ran out as 15/8 favourite Highland King was beaten into second place by Jim Bolger’s I Have A Voice in the concluding handicap.

Jessica Harrington and Shane Foley shared a bigger success as they won the nine-furlong listed race with the Alpha Racing 2020-owend Cadillac. It was all too easy for the 9/4 chance which beat Ger Lyons’ Georgeville by three and three-parts of a length.

Curragh Wednesday
Closer to home, Michael O'Callaghan took the seven-furlong maiden for two-year-olds at the Curragh on Wednesday where Crypto Force impressed with an opening race success. With Colin Keane standing in for the suspended Leigh Roche, the 14/1 chance overcame a tardy start to score by a comfortable two and a quarter lengths from the Aidan O'Brien-trained 4/6 favourite Auguste Rodin in the trainer’s own colours.

The 11/4 shot led over two furlong out and was quickly in control, beating O'Brien’s Over The Rainbow by two and a quarter lengths.

Johnny Feane has an improving type on his hands in the shape of the Charlotte Musgrave-owned Ano Syra which scored a three and a quarter-length win under Wayne Lordan in the five-furlong handicap.