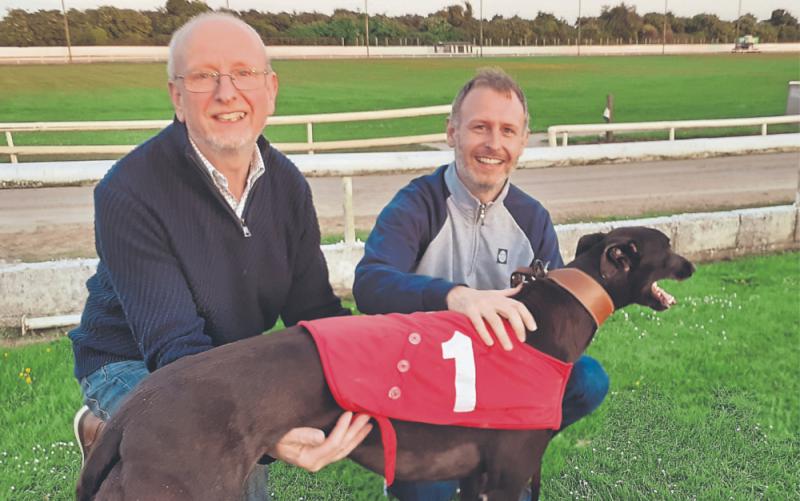 But the highlight of the evening came in the opening round of the local supporters club sponsored A2/3 525 as the Ballingar Iggy Daly handled home bred Lackenhill scorched around in a flying 28.77.

Racing opened with a novice sprint event that had the betting ring in a busy mood prior to the off. Once the lids lifted Right Billy set the early fractions to lead the Jerry Melia owned and trained Glenview Pat into the opening corner. With the leader moving off the corner slightly he let the Robertstown raider up his inner. Seizing the rails pitch the son of Glencorbry Pat –

Ironmans Lady raced home to a nice length and a half victory over the early leader in a very nice 17.68. Branwen ran on from the rear to take third spot.

In the second contest also over the sprint trip Coolree Dove set the early fractions before tiring up on the turn. Taking over as the opening corner came into play the Tony Coyle owned Mylerstown Holly made it into the home straight first ahead of both Killybegs Mia and Coss Range.

Sticking to the task at hand the Eden the Kid – Mylerstown Moll whelp battled hard to withstand the consistent challenge that Mia presented all the way to the line. With Holly making the line with a half a length to spare over Mia she stopped the clock in a nice 17.99. Coss Range was just another short head shy in third place.

Mylerstown Cross over took the faster starting Zaconey Jess on the run to the first turn in the third contest. Bringing the entire field in his slipstream all the way to the home straight it looked as if a Coyle double was on the cards but alas it was not to be as the John Hand trained Edmund Carroll owned Sadies Pick (Kinloch Brae – Lu Lus Pearl) pounced very late to run out a nice length winner.

Recording the first leg of the trainers double Sadies Pick stopped the clock in a nice 29.41 for her second victory from four outings. The Cross held on to second spot a half a length ahead of Scalextrics.

In the fourth contest a novice event held over the daunting 750 yards circuit the Donal Brennan owned Clonbrien Oscar posted a fine trap to line victory. Setting the pace from the outset the Clonbrien Hero – Annual Pearl whelp had various challengers along the way but by sticking to the script Oscar repelled all with ease. Staying out the trip very well he raced to his first race success when stopping the clock in a nice 42.58. Gazes Nobility was best of the rest four and a half lengths off the winner and four ahead of third placed Blackhall King.

Newbridge Track Supporters Club A2/3 525 Heat 1: Following a pretty level start by all in the opening heat Coss Flower who was wearing the red jacket slipped around the opening corner ahead of Kildallon Tilly and Mydras Puma owned by Moira Costigan.

With the Flower stretching out well down into the third turn the Portlaoise raider had another local challenger closing in as Mydras Puma slipped into second spot. Rounding the final turn Mydras Puma (Skywalker Puma – Mydras Daisy) took over the front running mantle and staying on stoutly he pulled out a very nice two and a half length victory as he stopped the clock in a very nice 29.04.

Kildallon Tilly took second spot a half a length ahead of the early leader Coss Flower.

Newbridge Track Supporters Club A2/3 525 Heat 2: Always one to not be afraid to take on the layers Iggy Daly pounced in the second heat with the Euro – Dollar – Syndicate owned Lackenhill.

Having contested the recent unraced sweepstake in Kilkenny the Dorotas Wildcat – Castlehill Biddy whelp used the experience gained to take this heat.

Wearing the red jacket he was led into the opening corner by Mr Perfect but by the time the back straight came into play Lackenhill had made his way to the front. From here he powered down into turn three ahead of the odds on favourite Droopys Kiddo.

Oblivious as to what was chasing him into the home straight Lackenhill finished strong to win going away by four lengths. Breaking the ray in an excellent he stopped the clock in the night’s best of 28.77. Droopys Kiddo had five and a half to spare over third placed Magical Puma.

The journey back home to Ballingar over the bog roads would have seemed a lot shorter for the Daly duo of Iggy and Cathal following this fine victory.

Newbridge Track Supporters Club A2/3 525 Heat 3: Following a very level break by all in this heat Payment Due rounded the opening corner ahead of both Athenas Spear and Blacktrench Lady.

With the field tightly bunched down into the third turn the Michael Phelan owned Scott Phelan trained Athenas Spear hit the front just before the turn came into play. Slipping to the home straight first the Pat C Sabbath – Shaneboy Tahiti whelp powered home to break the ray in a very nice 29.10.

Now the winner of three from four outings Athenas Spear is certainly paying her way.
Payment Due came home from the chasing pack three lengths shy and a short head in front of Clonfert Lorenzo.

Newbridge Track Supporters Club A2/3 525 Heat 4: The Declan Kelly owned Blue Devon turned back the clock to her earlier racing days to take the final heat with a very impressive display.

Riding a bump on the opening turn Blue Devon bravely entered the back straight first followed by Another Me Daddy. Making every post a winning one from here the daughter of Kinloch Brae out of String of Pearls had this contest in the bag well before the winning line was reached. Crossing the line in a very good 28.85 Blue Devon had six and a half lengths to spare over the staying on Tobeen with Carrickhill Ava advancing into the semi finals just another short head adrift in third spot.

The Jerry Melia double was completed in the ninth contest as he sent out the John Grogan owned Barrington Ber to score in a fine 28.94. Errill Shark left the traps as if one possessed in this contest to bring the field in his slipstream all the way to the home straight. Following the leader closely into the home straight Barrington Ber was waiting for his chance to pounce. Coming around the leader on the final turn the Laughill Blake – Oi Oi Upenalty Sept 20 whelp finished full of running to take the contest by an extending length and a half. Errill Shark in turn had five and a half to spare over third placed Roxannes Revenge.

The John Hand double was completed in the tenth contest as the Edmund Carroll owned Coolnevaun who was a winner last weekend over the course done exactly the same manoeuvre coming off the final turn to hit the front.

Entering the home straight first Rockstown Robin was taking on the outer by Coolnevaun as she couldn’t go up the inner but once clearing the leader Coolnevaun straight away headed towards the rails pitch.

Powering home from here the Kinloch Brae – Lu Lus Pearl whelp pulled out a nice two length winning margin when breaking the ray in an improved 29.40. Robin held second place six ahead of the staying on Speedy McCormack.
Racing closed with the Moira Costigan owned Last Daisy coming from behind the pace setting Great Hulk to score in a fine 29.25.

With Great Hulk posting a nice opening sectional of .98 he brought the field in his slipstream to the final turn.

With Last Daisy nicely poised on his heels as the home straight came into play she came up the inner of the Hulk to strike the front. Staying out the trip well the home bred Skywalker Puma – Mydras Daisy whelp pulled out a nice length victory.
In turn the Hulk had two to spare over third placed No Way Limit.