How Kildare came up short against Mayo in Croke Park 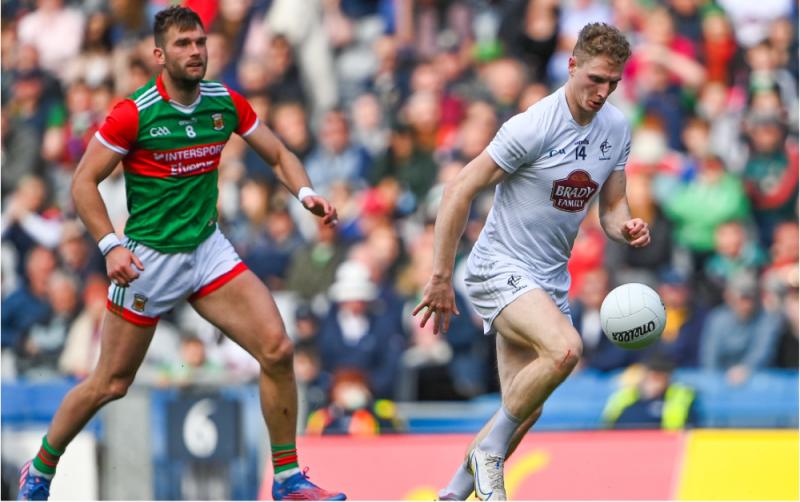 In the end there were five points between Kildare and Mayo, hardly a reflection of the game, hardly justice to the Kildare cause and hardly deserving after a Trojan effort from the boys in white, especially after the mauling they received just two short weeks ago at the hands of Dublin.

A point or two, would have been a better indication of the difference between these sides, but that would still have given us the same result, brought the down the curtain on the season and still would have sent Mayo into the business end of this All-Ireland series.

But make no mistake about it, this was a game that was there for the taking for Kildare, they got little or no rub of the green, one or two tight decisions did not go their way while the vital all-important goal, while well executed and finished, nevertheless had fortune written all over it when Oisin Mullin had all but run out of roadway, took a shoulder that actually knocked him into the clear, away from a few Kildare defenders before the Kilmaine man finished brilliantly to level it up.

From there on the writing was on the way as the Kildare legs, already coming under strain all over the field, just could not cope with the Mayo surge whose strength, believe and absolute refusal to give way is to be commended.

Kildare made all of five changes for this one, from keeper to corner forward and a trio in between.
In fairness some worked out brilliantly, one of two others simply did not.

Mayo were first to strike at goal but a free from Cillian O'Connor was poorly hit and failed to find the target.
A long ball into the Mayo danger area saw Danial Flynn rise beautifully collect, taking his mark on the 20m line but then inexplicitely hit the post off his left boot.

Another wide from Mayo before Jack Carey opened for the westeners on five minutes as Kildare picked up their second wide.
James Carr made a brilliant fetch but his shot never took off and fell into the arms of Aaron O'Neill.

Finally after eight minutes Kevin O'Callaghan found Darragh Malone to his right and the Allenwood man split the posts.
Two minutes later and The Lilies were in front when Jimmy Hyland converted a free after a foul on Kevin Flynn — it was a lead Kildare would hold until the 62 minute of the game.

Kildare showed they had learned their lesson from the Leinster final with players back in numbers every time Mayo got possession, led by Fergal Conway, who for a man that has seen few precious minutes in this campaign, showed that he has lost none of his prowess as he covered and swept brilliantly.

Jimmy Hyland extended the lead and Kevin Feely put three between the sides after 15 minutes.
Kevin O'Callaghan was everywhere working his socks off as Mayo showed they were vulnerable again failing to convert another free before Cillian O'Connor got his side's second point some 16 minutes after their first.

Not for the first time Mayo gained possession from a Kildare kick-out but again their effort fell short.
Daniel Flynn saw his point attempt blocked out for a 45 but Aaron O'Neill's well-struck effort went right and wide.
Kildare were still the more dominant team at this stage and stretched their lead through O'Callaghan with a lovely finish.

Lee Keegan, who epitomises everything good about Mayo, came forward to knock over a point but Kildare responded with a brilliant fetch by Daniel Flynn (in from Kevin Feely) saw The Bridge man fouled and Hyland made it 0-6 to 0-3 on the half hour mark.

Paul Cribbin, just on for the out-of-sorts Alex Beirne, found Kevin O'Callaghan and the Celbridge man fired over his second point of the day.

Mayo finished the half strong with two points from wing back, Eoghan McLaughlin, one from a terrible attempted pass the other following a great move involving James Carr and Jack Carney saw McLaughlin in on goal but Aaron O'Neill pushed his blistering shot over for a point.

Kildare finished the half on a high, Jimmy Hyland converted a free after a brilliant run from Daniel Flynn from half way to leave the score board reading at the break Kildare 0-8 Mayo 0-5.

Mick O'Grady made an excellent block to deny Mayo on the resumption as Kildare added three quick points from Ben McCormack, Daniel Flynn and Jimmy Hyland.

Some 41 minutes on the clock and Kildare now leading by six points and playing well.

First half substitute Fergal Boland reduced the deficit before Daniel Flynn went on a mesmerising run taking defenders out left and right before seeing his blistering shot blocked by Enda Hession, Mayo quickly turning defence into attack that ended with Cillian O'Connor getting his first point of play and a minute later Conor Loftus had the lead back to three.

Neil Flynn got his only point of the game, Lee Keegan got forward again to bring it back to three before Ben McCormack was very harshly judged to have picked the ball off the ground putting a stop to a promising Kildare move.

Both sides missed the target before Diarmuid O'Connor got his only score of the game.

Daniel Flynn left his man for dead, missed the target but was given a free, converted by Jimmy Hyland with the assistance of Hawkeye.

The game was really hotting up at this stage, Shea Ryan made a brilliant block, a shirt pull on Daniel Flynn saw Aaron O'Neill being called up to take the free but eventually Jimmy Hyland took the shot, a shot that looked too far out for The Larks man, who pushed it out right and wide.

Mayo while still trailing by three but were still very much in the game and they got the vital break-through on 62.
A fine move involving second half substitute Padraig O'Hora combined with Oisín Mullin saw the full back who seemed to be covered, take a shoulder that actually knocked him clear of a few defenders before he blasted to the net to make it 0-13 to 1-10.

Suddenly it was advantage Mayo.

Three minutes and Mayo were in the lead for the first time since the fifth minute of the game, when Fergal Boland hit a long-range beauty.

Kildare hit back a minute with Shea Ryan showing great strength and vision, got forward to punch the leveler.
Cillian O'Connor and Darren McHale opened a two point lead for the boys in green and red before Jordan Flynn hit a 35m effort over Aaron O'Neill as the keeper was scampering back to his goal, the ball ending in the back of the Kildare net.
Game over. Ball burst.

A brave, brave effort from The Lilies who will wonder for many a day what might have been, what could have been and really what should have been!