Comment: A tough and trying season for Kildare, time to learn and move on 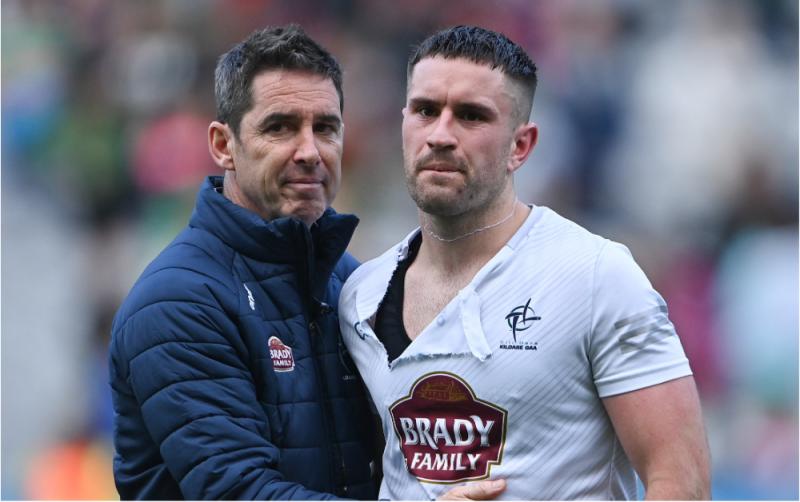 Kildare selector Anthony Rainbow with Ben McCormack of Kildare after their side's defeat in the All-Ireland Senior Championship match between Mayo and Kildare at Croke Park, Photo by Piaras Ó Mídheach

Can't ever remember exiting Croke Park after a five point defeat with so much mixed feelings of pride and disappointment.
Pride in the fact that the players left everything out on that pitch.

Pride in the fact that they showed that drubbing in the Leinster final was not a true reflection of where Kildare are at the minute.

Pride in the fact that with just eight minutes remaining Kildare were three clear and while coming under increasing pressure showed they were standing up to everything Mayo could throw at them up to that point.

Mixed with that great pride however was disappointment.

Disappoint that The Lilies left Croke Park knowing their season was over for another year.

Disappointment that in a game Kildare led by six points in the second half yet failed to close it out.

And disappointment in the fact there was nothing like five points separating these sides on a day full of emotion of both extremes — highs and lows, ups and downs, joy and despair.

It was hard to really know how one felt going into Saturday's game.

Knowing that Mayo looked somewhat vulnerable after struggling but getting over the line against Monaghan having lost to Galway in Connacht.

But at the same time fully aware of the reputation that Mayo bring to Croke Park.
Their tenacity.
Their refusal to buckle.
Their never ending belief.

Belief that has seen them on numerous occasions dig deep and deeper to get themselves over the line.
While at the same time not knowing what exactly Kildare would bring to the table following their melt down in the Leinster final.

When we finally heard the team news from Kildare — totally unaceptable that the side was not announced until just before the game, along with the fact that fans paying good money to read what was in effect a dummy Kildare line-up on the match day programme — five changes in total, from the net minder to the corner foward, and a few in between.

One could argue about some, agree with others while scratch one's head in wonderment at some, all at the same time.
The return of David Hyland and Fergal Conway was welcomed while at the same time somewhat worrying considering their lack of game time in both league and championship.

The Carbury man brought off one brilliant save to deny Mayo a goal before half time but overall did not have the game he had hoped for. However he is a strong lad and will, no doubt, put this behind him, learn from it and move on.
Kick-outs in the modern game are so vital now, we lost too many and too many failed to find their target while a few 'shorts' had the heart pounding on more than one occasion.

Overall though the defence as a unit, helped out with many additional bodies it has to be said, coped well throughout.
Leaving the second goal debacle to one side for the moment, the goal that changed the game was an excellent move, brilliantly finished while at the same time it being laced with good fortune.

A move involving Padraig O'Hora and Oisin Mullin seemed to be running out of runway until the latter took a shoulder that actually straightened him up, putting him in the clear of a couple of Kildare defenders that saw him advance before blasting to the net.

Such are the things that games, at all levels turn on and this, no doubt, was probably the deciding factor in this one.
Looking back on the Mayo scorers it shows that out of their 2-13 total, 1-4 came from defenders; nothing from their midfielders, six points from their starting six forwards but probably most telling of all, they gathered no less than 1-3 from their bench.

Compare that to Kildare.

Shea Ryan and Darragh Malone hit two points from the back; midfield garnered a healthy 0-3 while the starting sextet up front chalked up nine points and from that nine points five of those white flags came from placed balls courtsy of Jimmy Hyland.

When one looks at the Mayo total of 2-13, just one point came from a free, testament to the disciplined display from the Kildare defenders.

It was said at the very start of this journey, a journey when Glenn and his management took charge, that patience would be needed, particularly early on.

And, of course, they were right.

The League itself brought highs and lows, ups and downs, but ultimately relegation, albeit down to the last game, not forgetting another game that was won (and lost) in injury time.

In many respects being relegated was more disappointing when taking the long term look at things. Playing in Division 1 is absolutely massive and while everything and everyone awaits for the championship the role and the value of the League should never be under estimated.

There is no doubt though that players have learned a massive amount throughout this league and championship campaign.
Probably even more importantly the manager and his team have also learned.

Early signs in the campaign suggested all was not what it should have been, particularly defensively.
They were ignored.

Yes, Kildare were playing a very attractive brand of attacking football, and long may that continue, but their has to be a balance as we found out, not just against Dublin but Westmeath.

No team can leak goals and hope that the players at the other end will gather enough to off-set what is conceded.

On Saturday Kildare set-up, probably not the way the management had hoped they would not have to. But they learned and very nearly brought off a near miraculous recovery from the Leinster final disaster.

But at the end of the day Kildare's record in Croke Park remains one of the most appalling ones of any county.
In the last eighteen games, we have won three, against Westmeath (twice) and a one point win over Wexford. In fairness not on the watch of the present management but still that appalling record remains.

It could, and should have changed last weekend.
Mayo were there for the taking.

Fair comment to wonder what fresh legs might have done in those final ten minutes or so.
This was always going to be a tough season, time to learn now and move on to better days.
Hopefully!