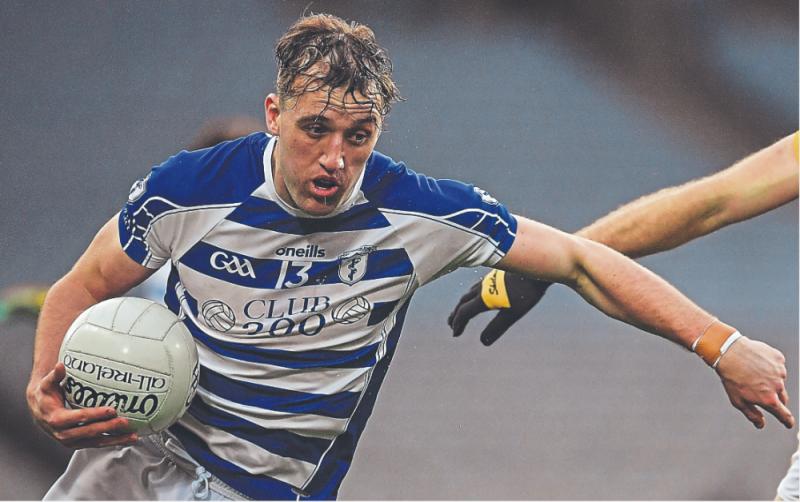 Darragh Kirwan, in top form for Naas against Athy in the SFL

Naas cruised to victory against Athy in the SFL Division 1, Round 11 game at the weekend finishing the game with a 12 point winning margin.

The game started slowly for both teams as they exchanged a few wides but it was Naas who found their feet first and Athy seemed to never get to that point themselves throughout this one.

In terms of attacking, it was all about Darragh Kirwan in the first half of this one as the corner forward's return from Kildare duty elevated his side's attack exponentially.

In a lack-lustre opening 15 minutes he was the man trying to make things happen. The towering forward, 0-5 from play on the night, and was a constant threat.

If the first half was Kirwan’s, the second half belonged to half-time substitute Kevin Cummins as the forward scored two goals to put his team out of sight.

The first setup by a driving Alex Beirne ran through the heart of the Athy defence as he passed it to Cummins to slap home. The second week running the Athy backline were exposed and punished as Naas did what Raheens did as the home side were opened up time and time again.

Following the second goal the game speed reduced dramatically as both sides felt certain they knew where this result was heading. Kirwan starred but special mention should be made to Alex Beirne who was immense in the middle of the park and set up the first goal of the day that put the visitors nine points ahead.

Both of these teams had a point to prove, the win guarantees Naas a league semi-final and draws them level on points with tonight's opponents with a game in hand. Elsewhere in the top four Sarsfields edged out Raheens in a tight game to join Naas in the league semi-finals.

The analysis of the relevant Kildare players in their ranks summed up both sides evenings as nothing seemed to happen for Athy’s Kevin Feeley despite his best efforts throughout. As for David Hyland he will have felt this game passed him by slightly as he rarely got on the ball within the 60 minutes. Athy failed to score from play in the opening half as they trailed 0-8 to 0-2.

There was a stark lack of creativity from the home side but Naas deserve enormous credit for their role in that as they tried to stifle anything that came their way. But Athy’s shot accuracy and shot selection left a lot to be desired. The away sides aggressive tackling as the sideline repeatedly ensured they kept a high line to win the ball as high up the pitch as possible, with great success.

Athy’s second loss of the season and now two in a row is not catastrophic on the surface as they remain in a strong position to secure a league semi-final. However the nature of the defeats will worry fans and management alike. Their defence has begun leaking goals, five in the last two games, and at the other end they haven't had a green flag raised in their favour in that same time.