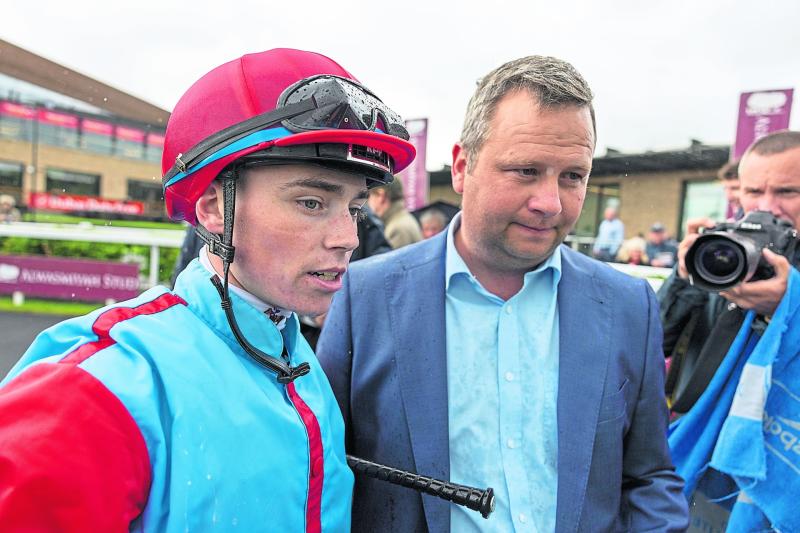 Local apprentice Jamie Powell recorded the first double of his career when winning both sprint handicaps at the Curragh on Sunday.

He won the six-furlong handicap on the Kevin Coleman trained Coumshingaun, the 10/1 shot recording a tidy one and three-parts of a length win over the Johnny Levins-trained 33/1 chance Nordic Passage although 3lbs out of the handicap proper.

Teaming up with Johnny Feane, Powell followed up straight away in the €100,000 Rockingham Handicap when partnering the Charlotte Musgrave-owned Ano Syra to a narrow success.

The well-supported 9/2 chance headed the Charles O'Brien-trained Big Gossey close to the finish to win by three-parts of a length.

The 12/1 chance came from well off the pace to score by a length and three-parts from the Jessica Harrington-trained 2/1 favourite Paris Peacock.

The first Kildare-trained winner on Derby weekend came in the opening race at the Curragh on Saturday as the Ken Condon-trained Teresa Mendoza scored a narrow success in the listed Dash Stakes over six-furlongs.

The well-supported 4/1 chance, in the colours of Ecurie Ama Zingteam, came from the back of the field under Billy Lee to pip the Johnny Levins-trained Prisoner’s Dilemma by half a length.

It turned into a fine day for local trainers as Johnny Murtagh and Ben Coen combined to win the Group 2 Gain Railway Stakes with Shartash in the colours of his owner/ breeder HH Aga Khan.

It was tight at the line but the 9/1 chance led in the final stride to deny Aidan O'Brien’s 5/6 favourite Blackbeard by a shorthead.

Michael O'Callaghan took the eight-furlong handicap with Fastnet Crown which races in the colours of his breeder, Michael Smith.

The 13/2 chance picked up well under Leigh Roche inside the final furlong to deny the Jim Bolger-trained McTigue by a neck at the line.

Bay Of Bengal scored by the same margin when taking the 10-furlong handicap for Willie McCreery and Billy Lee.

The 11/4 favourite, owned and bred by Ballylinch Stud, was another to arrive late on the scene and she got up to beat Brian Duffy’s Magic Chegaga with the Jessica Harrington-trained Lealaps three-parts of a length away in third place.

Sablonne, trained by Jessica Harrington and ridden by Shane Foley, scored a narrow success in the six-furlong handicap for three-year-olds at Naas on Wednesday. The 7/1 shot led before halfway and battled well up the hill to see off the Joseph O'Brien-trained Andreas Vesalius by a neck.

Ronan Whelan was a winner on the Sligo card on Tuesday where he partnered the Andy Oliver-trained Band Width to take the six-furlong median auction race. The 9/2 shot didn’t enjoy the clearest of passages but finished to great effect to beat the Joe Murphy-trained Messa Concertata, ridden by Gary Carroll, by half a length.

Ross O'Sullivan helped high-flying apprentice Jake Coen to his second double in as many days as Gracesolution took the 10-furlong handicap at odds of 15/2. The five-year-old headed the Conor O'Dwyer trained front runner Barretstown inside the final furlong to score by three-parts of a length.

Coen had earlier taken the six-furlong fillies and mares’ handicap on the Pat Murphy-trained Craft Irish, adding to two winners at Roscommon on the previous evening.

Gary Carroll scored a cosy success on three-time Galway Festival winner Imposing Supreme at Ballinrobe on Monday.
In the colours of Leonard Kinsella and Kevin Haigney, the Tom Gibney-trained 13/2 chance led before the straight and had a little in hand as he beat the Joseph O'Brien-trained 11/4 favourite Talbot by a length and a half.
Unsurprisingly, the winners heads back to Galway, where he was a winner in 2019 and twice last year, next month.