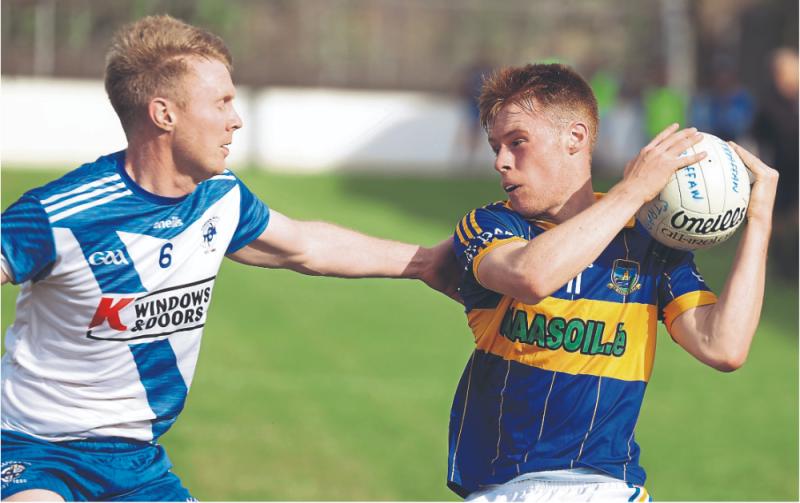 Grange came into the final on the back of an unbeaten league campaign and after a pulsating encounter they were deserving two point winners.

Grange started the brightest and Wayne Dooley had them in front inside three minutes. Ruairi Power levelled it within a minute and the trusty left boot of Austin Allen had Straffan ahead after eight.

Grange then hit four in a row through Fionn Bergin with two and one each from Conall Bergin and a Wayne Dooley free.
Anything that Grange did in that opening was matched by Straffan and after a lapse of 18 minutes Austin Allen kicked a free to reduce the gap to two.

Good work from Rob Kelly set up Aaron Kiernan and he left one between the sides with 24 on the clock. Direct from the kickout Tom Donovan won possession and his long pass to John Tracey was duly slotted between the posts to bring it level again.

Grange have a very lively forward line and the pace of Lee Doyle saw him set up Conall Bergin for the Grange lead again.
The lead was short lived and from the next passage of play Straffan struck for the first goal of the game.

A move involving Austin Allen and John Tracey saw Aaron Kiernan through on goal and he gave Killian Deere no chance.
Oran and Fionn Bergin pointed either side of Sean O'Connor's effort and Straffan led 1-6 to 0-8 at the break.

Rob Kelly was black carded in the build up to the last piece of action and Straffan would be down to 14 for the opening minutes of the second half.

The second half was much livelier and an Oran Bergin free had the sides level inside two minutes of restart.

Ruairi Power and Fionn Bergin swapped points as the decibel levels rose among the spectators. Austin Allen was fouled and he made no mistake to push Straffan one ahead.

When the Bergin brothers are around you expect something special and when Oran found Fionn he shot low to the Straffan net. John Tracey and a Rob Kelly free had the sides level again as we approached the last 10 minutes.
Lee Doyle and Conall Bergin put two between them as we were deep into injury time. Straffan threw everything at Grange but couldn't get that elusive second goal and after seven minutes of injury time Grange had held out to crown a superb league campaign as champions.

The Reserve Footbalal League Division 1 final pited Athy and Naas in a game that Athy had alot of experience to fall back on and it was this that saw them over the line against a young Naas team.

The opening half was very slow to take off and despite Naas racing into an early 4 point lead after 4 minutes courtesy of an Ailin McDermott point and a goal from Joe Murphy. Murphy was on hand to knock home the rebound after Drew Costello's initial effort was well saved by Matthew Anderson in the Athy goal.

Naas would go 24 minutes for their only other score of the half after Luke Mullins came forward from the goals to point a free on 28.

Athy dominated after Sean Moore got their opening point on eight minutes.Shane Jackman came forward from wing back to get his name on the scoreboard and it was seasoned campaigners Cian Reynolds and Mick Foley with four points that had Athy two ahead on 26.Reynolds made that three before Luke Mullins's point reduced it to two.

The score of the half came just before the half time break. Cian Reynolds and Darroch Mulhall combined to set up Tony Gibbons and he made no mistake to leave it 1-9 to 1-2 at the break.

On the changeover Ailin McDermott reduced the gap to six before Sean Moran and Joe Murphy exchanged points to keep the gap at 6 after 39 minutes.

Both defences were on top and scores were hard to come by. Darroch Mulhall broke the Naas defence on 47 as Athy pushed for victory.

When Michael Spillane shot for a point on 50 his long ball decieved Luke Mullins and bounced into the net. Matthew Anderson added a free on 51 as the Naas effort petered out.

They did find time to add three late points through Shane Gibbons, Shane Bergin and a Joe Murphy free but when Paudie Behan goaled in the 60th minute it put the gloss on a good Athy victory.
Athy winning out on a scoreline of 3-12 to 1-7.