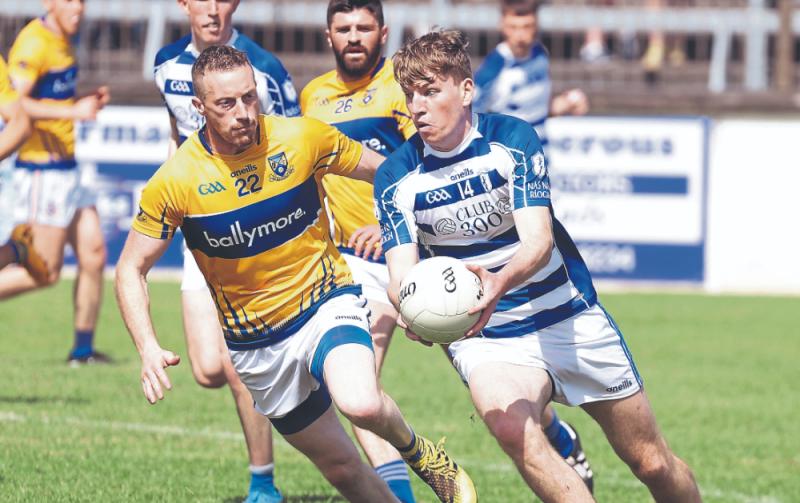 Naas booked their place in this season's SFL Division 1 with a somewhat facile victory over Raheens in the middle game of the three match programme at St Conleth's Park, Newbridge, on Sunday afternoon.

Three first half goals had the game all but wrapped up a long way before the final whistle in a game that rarely reached any real heights.

It was a game that Naas played like a team that knew they were always going to win while on the other hand Raheens, with no shortage of effort, never really put their opponents under any real pressure, while losing their main scoring threat, Paddy Woodgate in the first half, certainly did not help their cause.

Leading by a very unusual score line of 3-2 to 0-7 at the break, it was the boys from Caragh who had the more chances in the opening half but it was the clinical finishing of the Naas lads that was the difference between the sides.
2021 Leinster Leader Cup holders, Raheens, opened with the first two points of the game, through Mikey McGovern and Paddy Woodgate (free) after four minutes and while the impressive Dermot Hanafin replied with a similar score on nine, two minutes later the first of the 'majors' arrived.

The big full forward seemed to be well covered but he twisted and turned before firing a low shot to the bottom right hand corer of Declan Campbell's net, that despite a few defenders close by.

Mikey McGovern, set up by Jack Taaffe, saw his close range effort rocket off the crossbar before being cleared and in the resulting attack Paul McDermott fired over to make it Naas 1-2 Raheens 0-2.

Paddy Woodgate (free) reduced the deficit but Naas hit back when county man, Alex Beirne, hit a delightful ball over the top the Dermot Hanafin who made no mistake from close range.

Raheens, who did enjoy a fair amount of possession reduced the lead with a fine individual point from David Fitzpatrick, soon followed by a fine Conor Murphy converted mark to make it 2-2 to 0-5 after 213 minutes.

Raheens were hit a major blow at this stage when Paddy Woodgate was forced off with what looked like a hop injury.
And it got worse for the Caragh men when a minute later Declan Campbell was picking the ball out of the onion sack for the third time in 26 minutes, this time a move that involved Mark Maguire, Conor McCarthy and Eoin Doyle, ended with McCarthy fly-kicking the ball to the net to make it 3-2 to 0-5 with 26 minutes on the clock.

Colm Power, on for Woodgate, and Shane McSweeney reduced the gap as we reached the half-time break, Naas leading 3-2 to 0-7.

Early points from Alex Beirne and Eamonn Callaghan stretched the lead before David Malone was shown yellow, followed by Eoin Doyle and Dermot Hanafin, all more or less separate incidents before Liam Power fired over on the 40 minute, the score now reading Naas 3-4 Raheens 0-8.

Shane Bergin (Naas) was next to pick up a yellow card in a game that was far from dirty but match official Niall Colgan was certainly in 'yellow-card' mode.

Dermot Hanafin, Shane Bergin and Paul McDermott all added points, with Rob Thompson firing over a free for Raheens as the game edged towards its inevitable conclusion.

Naas now take on Athy this Sunday, while Raheens can concentrate on the upcoming senior championship.

Athy and Sarsfields met some five days previously in the SFL and it was the boys from Geraldine Park, Athy, who came out on top against a somewhat weakened Sarsfields side.

On Sunday last the clashed again, this time in the SFL semi-final and while Sarsfields certainly carried more ammunition into this one, it was still not enough to reverse the result, the boys in red recording a fully merited win by three points.

It was a game with no shortage of big hits with anything gained well earned, very physical between two teams that will be expecting to be in action at the business end of affairs in the senior championship and while Sarsfields, in particular, still have a few more bodies to come back in (Ben McCormack in particular) nevertheless the win will certainly put an extra pep in the step of Athy.

Athy full back, Cathal McCarron, opened the scoring with a fine point and Barry Coffey, the best player on the pitch by far, leveled.

Darragh Ryan picked up an early yellow before Paudi Behan edged Athy in front with McCarron getting forward once again adding his second and Athy's third point of the contest.

Ray Cahill set up Alan Smith and veteran split the posts and as we reached the mid-way point another Barry Coffey converted free had the game tied up at 0-3 apiece.

David Hyland hit a fine point before a great ball in by the same player was well caught by Kevin Feely, who was fouled, and Paudi Behan converted.

Barry Coffey hit a point from play before James McGrath (Athy) made a brilliant diving block to deny Ray Cahill.
Barry Coffey had the sides level again with another free but that was short lived as James Eaton capitalised on another turn-over, giving himself a goal chance but his effort flew over and when Kevin Feely was fouled again, Paudi Behan left two in it at the break, Athy 0-7 Sarsfields 0-5.

All to play for on the resumption with both teams giving it their all. That man Barry Coffey reduced the lead from a free; James Eaton increased it back to two before Coffey once again left one between them.

Coming up to the mid-way point, two dodgy looking frees at both ends were capitalised on by Paudi Behan and Gary White as the score stood at Athy 0-9 Sarsfields 0-8.

It was tight, it was physical and while it may not have been the greatest game, it was certainly very intense.
Barry Kelly was yellow carded for a high challenge as Athy added three quick points from James Eaton (2) and a fine effort from Kieran Farrell.

Now four points separated the sides, the most at any stage with Athy beginning to look like they repeat their win over earlier in the week but Sarsfields had other plans as Dan Nea and Barry Coffey brought it back to two.

As the Newbridge boys poured forward, a break-way point from Kieran Farrell looked to have done the trick.
And when Mark Hyland linked up with brother David Hyland the former palmed to the net.

But there was one more twist in it when Barry Coffey took a free, landed the ball into the danger area, Dan Nea got a fist to it and it flew past James Roycroft in the Athy goal.

However, on the kick-out the long whistle arrived with Athy booking a place in Sunday's decider against Naas, on a final score line of Athy 1-13 Sarsfields 1-10.