Celbridge beat Sarsfields in first round shock for SFC group B 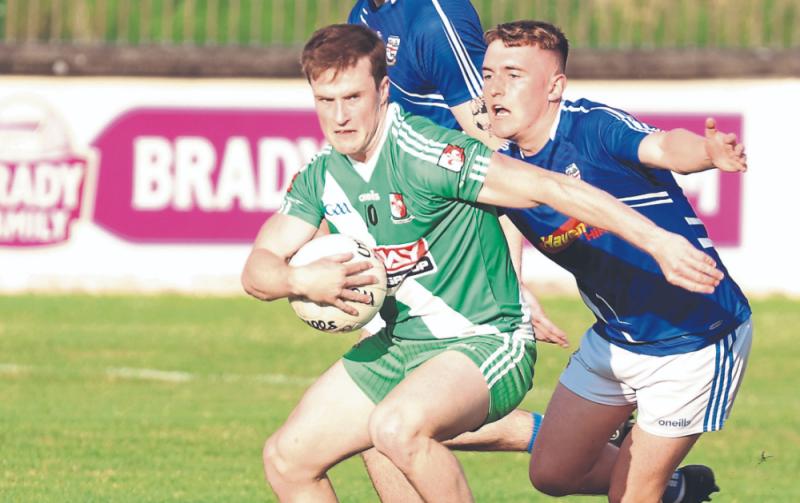 Sarsfields Barry Coffey holds off the challenge of Celbridge Niall O'Regan in Group B of the Joe Mallon SFC at St Conleth's Park, on Friday evening. Photo: Sean Brilly

You have to give credit for Celbridge, they played second fiddle for a long time throughout this Group B opening game in the SFC and when Kevin Flynn found the net in the 58 minute they had the wherewithal to hold on to that lead, despite some six minutes of time added on.

Sarsfields will wonder for some time how they let this one slip. On top for most of the game, they led from the fifth minute until the 58 and at one stage were four clear and while not exactly coasting, they seemed to have enough to quell a Celbridge challenge that, particularly in the forward division, rarely looked a big threat.

Fergal Conway fired over the opening free, a few wides, a few dropped shots from the boys in blue followed before Sarsfields opened their account on nine, Barry Coffey converting a free before Ben McCormack gave the Newbridge side the lead on ten.
Liam O'Flynn leveled with a fine effort from close to the sideline before The Sash went three clear with points from Cian Costigan, Barry Coffey (free) and Alan Smith point.

Fergal Conway reduced the gap as Darragh Ryan picked up the first yellow of evening.

Darragh Murphy had a goal chance but lost control before Fergal Conway was next to see yellow.
Ciaran McEnerney-Aspell (on for the injured Cian McConnell) left three in on 24 minutes before a first-time snap shot by

Darragh Murphy clattered off the Sarsfields upright before being cleared.

A foul on Alan Smith was converted by the ever-reliable Barry Coffey but before half-time Fergal Durkan (harsh?) for a foul on Kevin Flynn, then before the break it was the turn of Kevin O'Callaghan to see yellow as Sarsfields led, somewhat comfortable it has to be said at the break 0-7 to 0-3.

Within four minutes of the resumption the lead was cut to one with points from Darragh Murphy, Tony Archbold and Liam Flynn (free).

A brilliant long ball over the top by Barry Coffey put Alan Smith in on goal, whose effort went high and over but two more quick points from Darragh Ryan and Ben McCormack had the lead back to four on 38 minutes.

Kevin Flynn was next to pick up a back after hauling down Ben McCormack (no complaints with that decision).
Liam O'Flynn and Davy Hughes reduced the lead to two on 46 but again Sarsfields came back with another Coffey free.
Niall Donnelly and Callum Bolton exchanged points before Cian Powell cut the lead back to two again, 56 minutes on the clock.

Two minutes later Kevin Flynn found the top corner of the net and while one can argue if the county man was going for a point or a goal it was the vital score of the game and gave his side the lead by one.

Both sides missed scorable chances before Shane Doyle was next to pick up a black; Celbridge scored a break-away point from Liam O'Flynn (then received a black card) as the final whistle arrived Celbridge clinching it, 1-11 to 0-12.