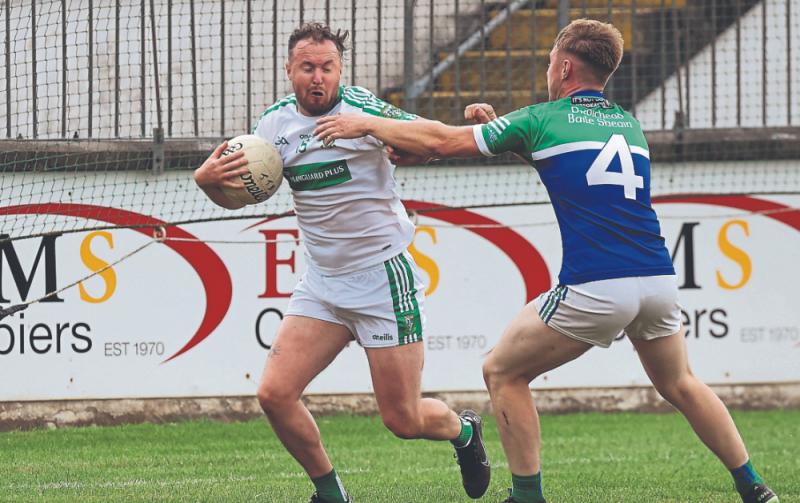 The final game in the four-game programme at St Conleth's Park on Saturday was certainly the most exciting as Moorefield and Johnstownbridge attempted to get a win after suffering set-backs in the Preliminary Round of the SFC.

It was a game played in sunshine, showers and the odd downpour but in fairness both sides gave it their all with JTB dominating the opening half that saw them lead 0-9 to 0-3 before The Moores came storming back in the second and in the end could have take it but a draw was probably the fairest result.

Kieran Kelly got The Moores up and running with a point after two minutes with the impressive Paul Cribbin leveling up two minutes later.

Kevin Murnaghan found Eamonn Callaghan to his left whose left footed effort sailed through the posts but the lead was short lived as The Bridge hit back with three quick points from Sean Hurley, Paul Cribbin and Hurley again, this time a mark as JTB led 0-4 to 0-2 just nine minutes on the clock.

Johnstownbridge were using their big men up front to great effect, sending in high hanging balls caused major problems to the Moorefield full back line with Sean Hurley and Daniel Flynn showing their high fielding skills.

On 11 minutes Moorefield had a great chance to find the net when Evan O'Brian was put through on goal but 'Bridge keeper Eoin Sheehan made a brilliant save to push it out for a 45 which was converted by Aaron Masterson.

Johnstown more or less dominated the second quarter of this one and with points from Sean McKeon, Paul Cribbin and a Danial Flynn mark led 0-7 to 0-3 with 20 minutes gone.

That four point lead was to grow to six by the break with Hurley and Cathal McNally firing over while a Shane Flynn pile-drive blasted off the upright and was cleared as the half-time arrived and Johnstownbridge in a very commanding six point lead, with the wind in their favour in the second half, leading 0-9 to 0-3.

No doubt a lot of tough talking in the Moorefield dressingroom at the break and it certainly had an affect.
Aaron Masterson, who had a magnificent second half, opened with a fine point and then added a second, this time a free after Eoin O'Connor was fouled.

Paul Cribbin converted a free before Luke Flynn and Keith Cribbin were each given yellows.

Another brilliant free from Masterson left four between the sides before James Murray picked up a yellow for a heavy challenge on Ronan Scanlon, Paul Cribbin converting the resulting free on 40 minutes, incredibly that was Johnstownbridge's second point of the half but also their last of the game.

Tom Harrington was bottled up close to the JTB goal, as more yellows followed, this time to Daniel Flynn (harsh) and Cathal McNally.

Moorefield were now the dominant force, on top in midfield they poured forward as the rain lashed down.Ciaran Kelly converted a free, Jason Philips split the posts before Aaron Masterson had The Moores followers in full voice with two points, the second a free to leave just a point between them, 0-11 to 0-10 and five minutes plus to play.

The equaliser finally arrived in the 61 minute and fell to the impressive Masterson with another fine free.
Moorefield had a last chance to nick the win but a 45 close to the sideline went left and wide as the final whistle arrived at 0-11 apiece, both teams reasonably happy with the result all things considered.