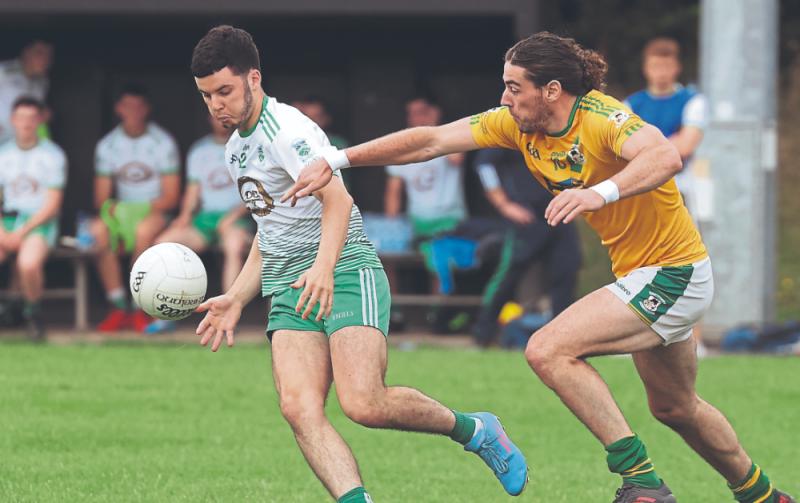 Despite a second half rally, two late Sallins goals ensured that they would hold on to overcome Two Mile House in Group A of The Auld Shebeen Bar Athy Intermediate Football Championship, played at Kilcullen on Saturday afternoon.

A further point from James McGuinness threw the advantage over to Two Mile House as they looked to exert some dominance over Sallins.

Unable to do this Colm Dalton blasted Sallins back into the lead, netting past Luke Coy.
An exchange from Healy and Rory Gavin ensured to maintain the two-point advant age Sallins had worked to enjoy as did a trading of scores from Healy and Dalton.

With the half looking to come to a close Chris Grimes found himself standing over a free with seven minutes remaining and quickly converting Sallins were three clear before Healy once more chipped over from a placed ball late on in the half.
Trailing by two at the break, Two Mile House looked to get back into contention through Adam Conneely soon after the throw in.

After Jack Collins struck the upright, Conneely was in the perfect position to gather the rebound. Unleashing his shot right at Ryan Herbert, Herbert gathered possession before quickly moving it on.

With the ball working its way to the hands of Alan Marshall, he quickly converted and rose the green flag to leave Two Mile House faced with a six-point swing in the space of forty seconds.

Chris Healy replied again for The House from a placed ball before Sallins tagged on two further points through Marshall and Dalton.

With six points now the difference Two Mile House needed possession and position fast if they were to have any hope of overturning the efforts of Sallins. Two quick points from Healy before one from Mark Sherry had the deficit to three.

Attempting to make up for his earlier shot on goal Conneely then pointed to take Two Mile House to within two once more.

Determined to give his side every opportunity to seize the lead. Conor Keogh won possession around the middle and forcing his way forward, he strode past the challenge of Sallins’ Aaron Carney to blast past Herbert. making sure the keeper had no opportunity to stop the strike, Two Mile House were now one clear yet again.

Sallins then rose whites flags through Grimes (2) and Cox before Cox converted a penalty.
With two minutes remaining a Healy free did little to change matters as points from Grimes (2) and Cox rounded off a convincing Sallins win.