Celbridge and Confey share the spoils in Kildare SHC draw 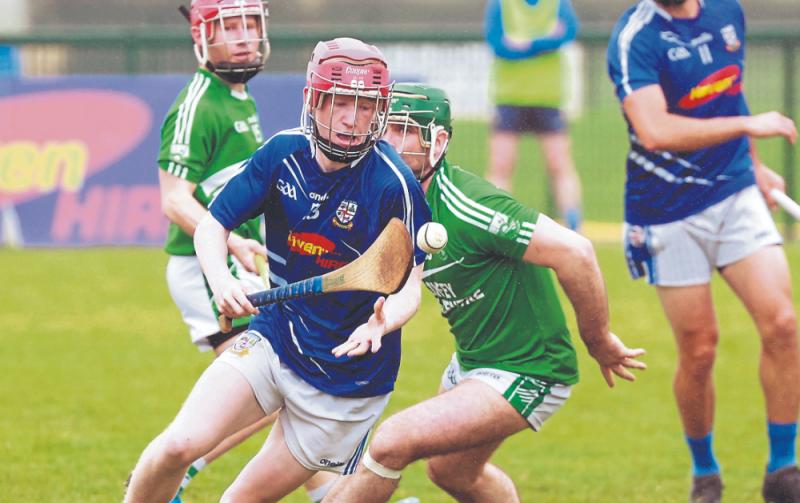 Celbridge James Dolan spins away from Confey Ian Barker in the UPMC SHC, Group B, Round 2 game at Hawkfield, Photo: Sean Brilly

Celbridge and Confey played out an exciting draw in Round 2 of the UMPC SHC, Group B (losers' group) at Hawkfield on Saturday afternoon.

It was a game both sides will feel they could have won with Confey probably having the best opportunity when a late free failed to find the posts, a score that would have put them back in front.

In all the sides were level seven times through with Celbridge dominating early on but Confey coming right back in it in the second half and in fact led by two not too long from the finish.

Two Billy White frees had Celbridge in front early on but Frank Bass reduced the deficit before a lovely cross-field pass from Gerry Keegan saw Sam White making no mistake.

Confey hit back to draw level with white flags from Shane Lawless before Ben O'Boyle had his effort brilliantly saved by Fiachra Ó Muineacháin but Bass fired over the resultant 65 to level.

Gerry Keegan and Bass again exchanged points before another White Free had Celbridge one clear on 15 — 0-5 to 0-4.
Eoin Lynch leveled, Gerry Keegan replied before Paul Divilly hit a monster free followed by an Eoin Lynch point as Confey led by one.

A long ball into the danger area saw Confey keeper Shane Quinn batted down the sliother but only to Andy Shanagher who made no mistake to find the net from close range and when Jamie Connelly added a point Celbridge now led 1-7 to 0-7.
Confey got right back into it, after the sides exchanged points, when Shane Lawless found Colm Chan and the full forward found the net for the equalising goal.

Celbridge stepped it before half-time hitting four points on the trot to lead 1-12 to 1-8.
A Ben O'Boyle goal at the start of the second half gave Confey a bit of momentum and while Gerry Keegan fired over a point two white flags from Paul Divilly had the sides level again.

Celbridge edged two clear but Confey hit back with four points on the trot to open a two point lead on 45 minutes.
Leo Quinn reduced the lead to one; Billy White sent a scorable effort left and wise; Paul Divilly had a chance to put two in it but his free was pushed out right and wide before Leo Quinn leveled on 62 minutes as the final whistle arrived: Celbridge 1-17 Confey 2-14 — all things considered probably a fair result on the day.