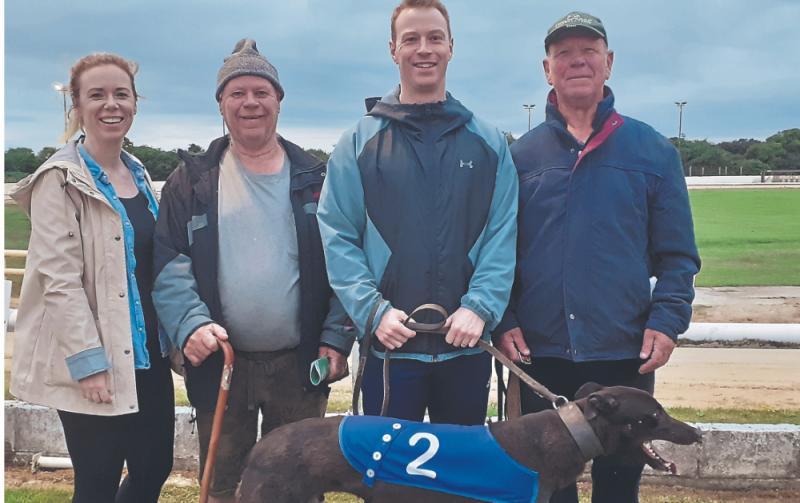 The star of the show at Newbridge greyhound stadium last Friday evening was the Philip Haslam owned Clonuff Colm.
Having passed his fourth birthday a few months ago still showed the zest for racing when making all in the evening’s best winning clock of 28.88.

Towards the end of the evening both semi finals of the stadiums A1/2 sweepstake were very closely contested affairs with both Last Daisy and Montauk taking the spoils.

Racing opened with a nice novice contest where Implicated set the early fractions before being passed on the entry into the third corner by the Michael Cully owned Coonough Crow. With the Crow battling for the inner position on this corner Implicated was forced to check up slightly as Hollywell Magic also lost valuable ground.

Racing away ahead Coonough Crow pulled out a nice two and a half length winning margin over the renewed effort of Hollywell Magic.

Breaking the ray in 29.16 this daughter of Eden the Kid – Coonough Crow appears as if a step up in distance would be well within her compass.

Over the sprint course Killybegs Mia was quickest into her stride pattern to race towards the opening corner. However coming close to the turn the Paula Coss owned Coss Bolt flew by in the striped jacket to hit the turn first.
Once out ahead this Ballymac Best – Luck Lady whelp cornered lovely to set himself up for a very nice four length victory over Mia. Stopping the clock in a very nice 17.80 this home bred opened his winning account on the third time of asking. Killeshill King took third place another three and a half length adrift.

Doonanes Houdini was quickest into his stride pattern in the third contest to just lead Hank Solo around the opening turns. Coming out of the second turn this remained the position but on the back straight the Jack Bride owned Hank Solo went by to reach the third turn in front.

From here the beautiful fawn son of Deanridge Viking – Pennys Mulan pulled out all the stops to withstand the challenge of Scalextrics. Crossing the winning line in front for his first time Hank Solo stopped the clock in a nice 29.71 with a length to spare. Ah Sure Look took the minor place money on offer another length and a half shy in third spot.

The Ciaran McEvoy trained The – Doghouse – Syndicate owned Highfields Queen was quickest to the opening corner in the fourth contest of the evening.

Rounding the turn ahead of both Grey Wind and Pennys Law her supporters were in full cry as she raced to the third turn with a two length advantage over the Wind.

Again vocally encouraged from the stands the Ballymac Best – Ridgedale Martha two year old pulled out all the stops on the run home to strike the line first. With the infield clock showing up a very nice 29.07 the Queen had a length to spare over Grey Wind with Forrachamore Mick back in third spot another three and a half lengths adrift.

Another Chaperal was first to show in the fifth contest but on the run to the opening turn she was joined by Mike Mac. From here Mike Mac brought the field in his slipstream to the third corner where the John Hand trained Edmund Carroll owned Coolnevaun joined forces with the leader.

Right on the turn Liffeyside Hoo who was racing hot on the leading pair’s heels checked out having no room to continue her move up the inner. At this stage Coolnevaun (Kinloch Brae – Lu Lus Pearl) was giving the room she needed to extend her lead to go on and make it win number four as she breached the winning line in a fine 29.37. Liffeyside Hoo regained her stride pattern to take second place three ahead of Mike Mac.

The veteran Clonuff Colm was the star of the night in the sixth contest. Having recently made the final line up of the Newbridge Derby he appeared nicely treated by the handicapper in this contest.

Available at five to two in the betting ring Colm defied these generous odd by flashing out ahead of his rivals from the get go. Easily making every post a winning one Colm raced to a four and a half length winning margin as he stopped the clock in the evening’s best of 28.88.

Owned by Philip Haslam the son of Jaytee Jet – Highview Record brought his winning tally to the eleven mark. Recent winner Aloha Aolani ran a cracker all the way in second spot to finish a length and a half ahead of third placed the reserve Pennys Dynamite.The ninth contest was a pleasure to watch as the inexperienced Lemming Leo who had his first contest only a week ago took on some more experienced rivals.

Last weekend’s sweepstake winner Junior Blue set the early fractions to bring both Oneforthegirls and Lemming Leo in his slipstream to the opening of the back straight.

Still holding his advantage to the third and fourth corners the Blue was first to view the winning line. Followed into the home straight by the Keeley McGee trained Lemming Leo the Blue allowed the younger rival Leo take the inner line.

Once seeing some daylight ahead the Stephen Katz owned Lemming Leo (Ballymac Vic – Slippy Articfire) seized his change to power home to an extending two and a half length winning margin. Breaking the ray in a very good 29.06 I have a feeling we will be hearing a bit more from the nice prospect in the coming months. The reserve Swift Yogi finished full of running to claim second spot by a neck over the pace setter Junior Blue.

This Runs Deep A1/2 525 Semi Final: Following a very level break by all in this semi final Lodgefield Saga reached the opening corner first followed closely by all her rivals.

Keeping her rivals in her slipstream all the way to the home straight the Saga was first to view the winning line. On the run home Last Daisy owned by Moira Costigan drew level with the leader and in a close tussle all the way home Last Daisy (Skywalker Puma – Mydras Daisy) just got past to win by a neck in a nice 29.39. Lodgefield Saga in turn had a length to spare over the next finalist Lively Blake.

This Runs Deep A1/2 525 Semi Final: Having his first look at the Cornelscourt circuit the Liam O’Rourke trained Debbie O’Rourke owned Montauk who has a bellyful of racing experience around Shelbourne Park put this experience to good use to set the pace from trap rise to reach the opening corner ahead of Granarda Jack and Leinster Leo.
Once entering the back straight first the son of Ballymac Matt – Kilara Duchess proceeded to make every other post a winning one. Breezing to a nice two and a half length winning margin Montauk stopped the clock in a nice 29.41. Both Susie Chaperal and Leinster Leo made next Friday night's final line up in the minor positions.

Vincent Leavy R.I.P.
During the course of the evening a sombre minutes silence was observed in memory of Vincent Leavy who passed away suddenly during the week.
Vincent raced his greyhounds under the “Alamo” prefix over the midlands circuits all through his live and all at this stadium pass on our deepest condolences to the Leavy family.
Vincent may the sod rest lightly on our soul.

50 Year Anniversary
The first race at Newbridge Greyhound stadiums Cournels-court venue took place on August 15 1972.
To mark this 50th anniversary the Supporters Club along with the GRI will be honouring the occasion on the Friday August 19.
If any patrons have old photos from over the years please contact Martin Sweeney so as we could display them on the night.