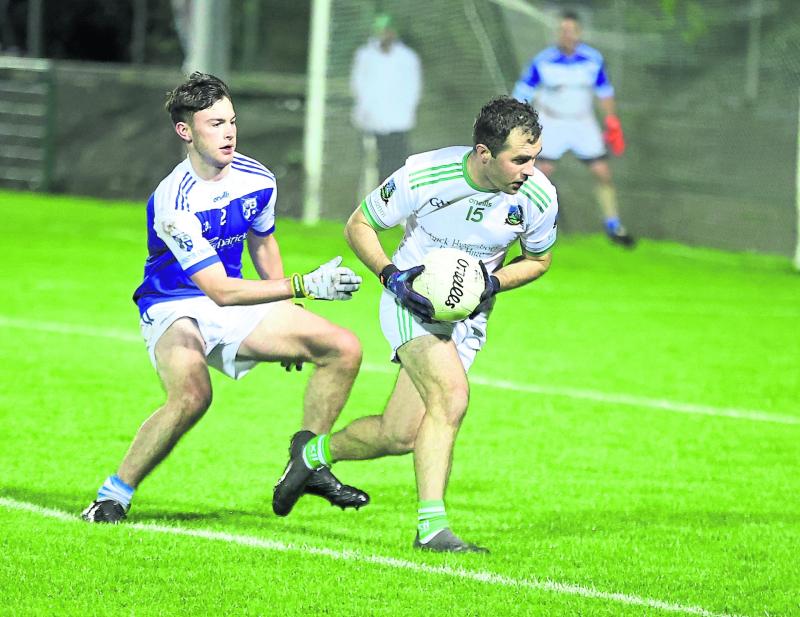 Monasterevan cruised to victory over Nurney in what was a hard-fought but not overly competitive tie in the Intermediate Football Championship.

Monasterevan spread the scores around well with eight different players getting on the scoreboard.
Cormac Stapleton got the opening score of the day for Monasterevan and they never looked back and began to put scores up at a rate their opponents were never able to match.

Nurney’s Andrew Behan brought them back within two on 13 minutes with a well-taken free but it would be the last time his side scored until the early parts of the second half. Monasterevan began to tot up scores at a similar rate that referee Alan Lagrue gave out yellow cards.

The game finished with 10 yellows and a red card and despite this game spilling over on one occasion you can't say all of the bookings were justified.

Monasterevan’s Gary Morrissey received a black card just before the break and gave hope that the extra man advantage might have ignited Nurney. But it would be a mountain to climb as the sides entered the break with Monasterevan at 0-8 and Nurney struggling to 0-2.

Nurney’s Andrew Behan got the opening score of the half but just as fans and interested spectators began to speculate that this game might open up as the trailing side still held a man advantage, it was short-lived.

It became clear that whatever passages of play that either side were going to be able to put together would be interrupted by the incessant blowing of the referee’s whistle.

Much of the early dialogue of the Premier League opening weekend has been around referees being more lenient to allow games to flow, a lesson that could have been heeded here.

Padraig Nash registered one of the scores of the game on 39 minutes as he launched an outside of the boot effort between the posts to restore his sides eight-point advantage.

If the gargantuan lead wasn't enough Nurney’s slender hopes were dashed as Owen Sunderland was sent off for a second bookable offence, both as soft as a memory foam pillow. But nonetheless the wing-back was given his marching orders on 42 minutes and with him went his team’s chance of getting something from this game.

The next few minutes saw no more action in regards to scores but there were a few yellows in there for good measure. The bookings were interrupted by an exceptional Wayne Fitzpatrick score that all in Hawkfield had resigned to sailing wide. The ball aided by a slight breeze, but all credit to the kick’s owner Fitzpatrick, came back across and over the black spot.

A raft of changes for the leading team followed as they looked to rest their key men. It’s a first win of the Championship for Monasterevan who moved to three points following their first round draw with Suncroft. Nurney remained on two points after today’s defeat, having beaten Milltown first time out.