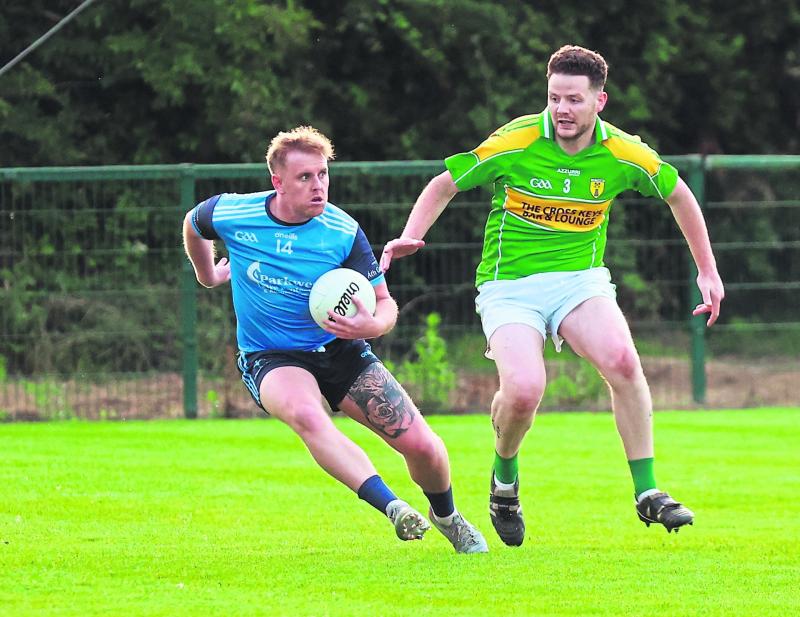 On a crisp evening it was Athgarvan who settled best and by the fifth minute they lead 1-3 to no score. Corner back Steve Moore coming forward to get on the end of David Butler's pass to finish cooly.

Jordan Nolan Mullally, Cillian Smith and Cian Doyle adding the points as Athgarvan were finding it all to easy to get on the scoreboard.

Joseph Walsh did get Kildangans first white flag after 12 but it took them another 24 to get their second, again through Walsh. In that period Athgarvan had added another 1-4 before the interval to lead 2-7 to 0-2.

Two points from Cillian Smith and one each from Dylan O Keeffe, after a long run from half back, and a Cian Doyle free was no more than they deserved but when Nolan Mullally added a second goal on 27 he killed the game as a contest.
The change of ends had Athgarvan playing with the aid of a slight breeze and they opened up in similar fashion to how they finished the first.

Three quick points in as many minutes from David Butler, Nolan Mullally, and Alan Sourke pushed the lead out to fourteen but in fairness to Kildangan they couldn't be faulted for their effort.

Joseph Walsh made a long run down the left wing towards the Athgarvan goal and just as he was about to shoot he was fouled.Daniel Gilbert landed the point but this was to be their last score of the game.
Athgarvan upped the tempo again and in the closing 25 minutes they added 4-10.

Goals from Alan Sourke, Jordan Nolan Mullally, Dylan O Keeffe and a late goal from substitute Glen Doyle put the gloss on a solid performance Points from Sourke, Doyle,Smith, Finn O'Brien and the impressive Jordan Nolan Mullally was all to much for Kildangan and they were happy to hear Michael Malone's final whistle.

Athgarvan will take this good victory but their will be tougher tests ahead.

Kildangan have an array of young talent and despite the defeat to a more seasoned Athgarvan,this game will stand to them in the future.