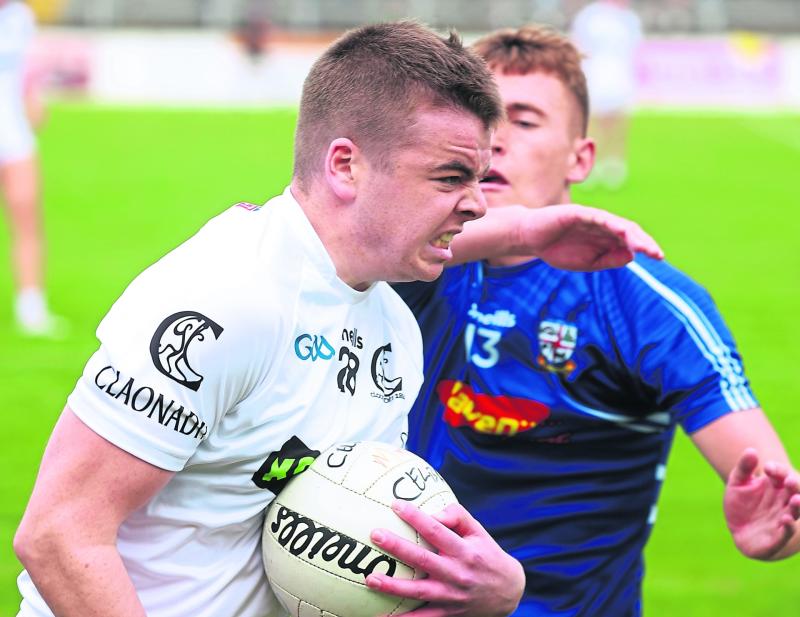 Call it 'moving weekend' or whatever but one way or another there are a lot of issues on the table as Round 3 in the group stages of the Joe Mallon (Renault) Motors SFC takes place this Saturday and Sunday.

Not alone are their quarter-final places, pre-quarter finals down for decision there are also relegation final places to be decided, so all-in-all an exciting weekend of games and with Naas the only senior side to be guaranteed a quarter-final spot at this stage, everything else is up for grabs.

Naas tops with four points; Athy have 2, Maynooth 1 and Eadestown 1.

Naas take on Maynooth, top to the table county champs guaranteed to remain on top regardless and  it will be interesting to see if they will decide to field at full strength against a Maynooth side that were somewhat fortunate to get a draw against Eadestown. Either way it is difficult to see anything other than a win for Naas.

Athy take on Eadestown in the second Group A game. It is a game that Athy can't afford to lose and while Eadestown are more than a decent team you have to fancy Athy to get back to winning ways after suffering that defeat to Sarsfields in Round 2.

Kevin Feely came off injured in that game so The Reds will be hoping he will be back fully fit, if he is they should have enough to win, if the county man is missing it could be a tight affair but Athy still get the vote to book second place and with Maynooth and Eadestown, both on a single point and the scoring difference exactly the same, the third spot could go right down to the wire.

Clane are the surprising leaders in Group B, with wins over Raheens and a very impressive win over Celbridge last time out.

That win will certainly give Tom Cribbin's side a major boost; a draw with Sarsfields will push Clane through the quarter-final.

Sarsfields got back to winning ways against Raheens and their (Sarsfields) clash with Clane is certainly one to look forward to.

Celbridge, although very poor against Clane, should have too much for Raheens who were somewhat unfortunate to lose to Clane by a point but just did not turn up against Sarsfields.

If Clane can reproduce the form they showed against Celbridge again they will certainly push Sarsfields to the limit but the Newbridge men still get the nod (not over confidently though) to win; three teams could end up on four points and it will be down to scoring difference after that.

At the moment Clane are on +11; Celbridge -8 and Sarsfields on +12 so it could be Sarsfields and Celbridge into quarter-finals with Clane into pre-quarters, but it is really all to play for here.

Johnstownbridge lead this group on 3 points; Carbury also on 3; Moorefield on 2 with Round Towers on the bottom with zero.

And with Moorefield and Towers meeting this weekend and Johnstownbridge taking on local rivals Carbury. another very interesting set of fixtures.

Putting Johnstownbridge in as favourites to defeat Carbury is a bit of a dodgy call, lots of things to consider such as which Johnstown side will turn up and this being a fierce derby game anything is possible.

Still one would have to side with JTB and if they win they will go straight to the quarter-finals (remember just the top team in Group B and C are automatically through to the last eight).

The second game sees unbeaten Moorefield (two draws) take on Towers (two losses) and again one would have to side with The Moores to take it one. They (Moorefield) have been somewhat unfortunate in their three games to date (which includes their preliminary game against Naas) they had a 45 deep into injury time in all three to win them all but failed to find the target.

This is a repeat of last season's round 3 game, a game which Moorefield were fancied to get through but were defeated with Towers getting a late goal to knock them out, so despite losing both their games Towers will be fully aware of what they achieved last season.

However the boys in black and amber were very poor against The Bridge and Moorefield get the vote.

Johnstownbridge to make it to the quarter-final;  Moorefield to book a place in the pre-quarters with Towers possibly into the relegation decider.

Another  tight group but with Confey already into the relegation final, regardless of how they fair against Clogherinkoe, it certainly gives them (Cloghs) a mighty opportunity to get to the pre-quarter finals, at least, especially when they only drew last time out against The Larries, a game they (Clogherinkoe) should have won comfortably.

Kilcock are not without hope and while they struggled for long periods against Confey, in the end they came through by three points.

Many look at this group as being the weakest of them all but that won't bother who ever qualified. Larries against Kilcock is a very difficult one to call and while The Larries have been riding their luck to date, they just might have enough to get through, possibly to the pre-quarter finals with Clogherinkoe going straight into the last eight.

How it works; SFC pre-quarter, quarter finals and relegation final

The top two in Group A and B are straight into the last eight as are the top sides in Group C and D.

The relegation final will be between the sides that finish bottom in Group C and D.