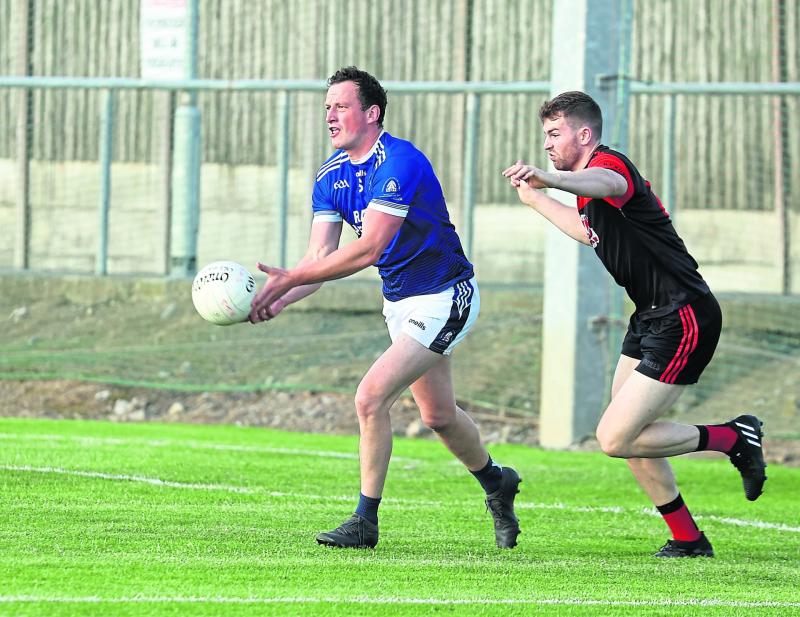 The format for The Auld Shebeen Athy Pub Intemrediate Football Championship is similar to the the senior championship grade with the top two teams in Group A and B going straight through to the quarter-finals, along with the top team in Group C and D.

The other two quarter-finals sees team 3 in Group A and Group B playing teams 2 in groups C and D respectively.
And just like in the senior grade there are lots of places in the knock-out stages up for grabs, including relegation finals.

IFC GROUP A
Leixlip, one of the favourites to win the IFC, are joint tops in Group A after two games following a win over Two Mile House and a draw with Castledermot.

Leixlip have already gained promotion back to Division 1 of the SFL so are enjoying a fine season.
In Sallins though they are facing a big challenge, the boys in green and white lost out to Castledermot but only by two points in Round 2 but one suspects Leixlip, with a fine mixture of youth and experience might just shade this one.

Two Mile House although they have lost both their games have been somewhat unfortunate and will certainly give it their all against Castledermot who have been showing more than decent form this term.
Expect Castledermot to win with scoring difference to decide who finishes first and second.

IFC GROUP B
Allenwood and Caragh are both unbeaten in Group B, both having defeated Rathangan and Ellistown.
The top two clash this weekend with just who finishes first and second at stake.

Both of these sides expect to be in action at the business end of the championship and while both have been playing fine football, scoring well and there is little to separate them but the nod goes to Allenwood to shade it on this occasion.

Rathangan and Ellistown clash with the winner advancing to the pre-quarter finals. Difficult to separate these two and expect this one to be close and tight with Rathangan possibly booking that pre-quarter spot.

IFC GROUP C
Ballymore Eustace have seen their fortunes take a very positive turn, specially after a disastrous league campaign. In fairness to the boys in green and gold, they played most of the league very much under strength from last season but they have been strengthened by the return of a handful of some of their more established players.

They are on four points along with Ballyteague, both are guaranteed a semi-final spot just the order in which they finish to be decided. Interesting game this one but with Jimmy Hyland in top form at the minute it could tilt the game in their favour.
Kilcullen and St Kevin's will be hoping to getting dragged into relegation.

Kilcullen have been very unfortunate in both their games losing to Ballymore by one and again by one in Round 2 to The Larks.
St Kevin's seem to be struggling at this stage and while a one off game anything can happen but the vote goes to Kilcullen to win this one and avoid being drawn into a relegation battle.

IFC GROUP D
Monasterevin and Suncroft are the front runners in Group D of the IFC, the sides drawing when they clashed in the opening round.

Nurney are back in third spot with Milltown holding up the bottom with zero points, avoiding a relegation battle top of the agenda but with a very young Milltown struggling you have to expect Monasterevin to have enough to win that one with Suncroft getting the better of Nurney pushing Milltown into the relegation decider.