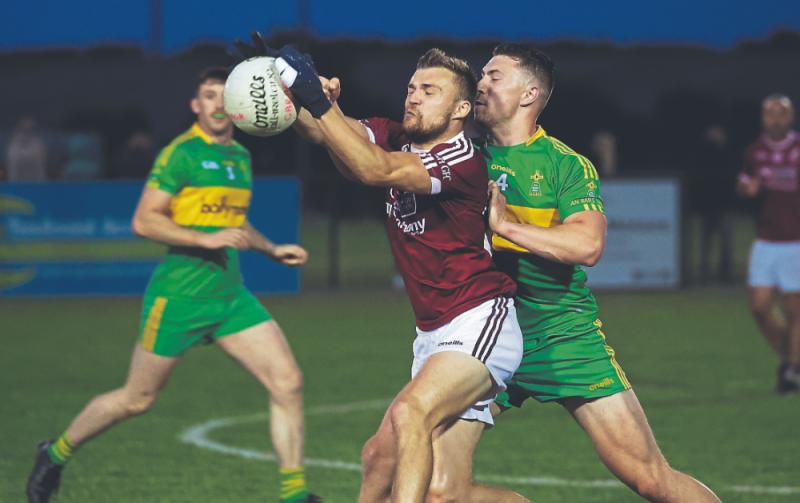 Caragh were the first side to book a place in the The Auld Sheebeen Pub Athy IFC semi-final with a well-deserved six point victory over Ballymore Eustace at Hawkfield on Thursday evening.

Ballymore had turned their season around since the start of this campaign and certainly began, albeit slowly, fully intent on keeping that winning run going.

We reached the 17 minute, still just the two scores on the board but Simon Murphy edged his side three clear with a converted free to lead 0-3 to no score.

Finally Caragh began to get into their stride hitting three consecutive points in six minutes through Kevin Campbell, Eoghan O'Haire, after Jake Corrigan was fouled, and then from Danial Murray, after being put through with a low pass from Kevin Campbell.

So after a slow start the sides were level at 0-3 apiece but as we edged towards the half-time break it was the boys in maroon who took the lead for the first time, a Kevin Connor free, followed by a similar score, this time from midfielder Eoghan O'Haire after Daniel Lynam was fouled to leave the half-time score reading Caragh 0-5 Ballymore Eustace 0-3.
Caragh's Daniel Lynam picked up an early yellow as both sides missed opportunities to add to their totals.

Ten minutes into the resumption it was Ballymore who finally moved the score board, Sean Broderick reducing the gap to the minimum.

Caragh replied with two points inside a minute from Eoghan O'Haire and Kevin Campbell.
Shane Barrett reduced the gap again mid-way through but minutes later Caragh took a firm grip when Daniel Lynam found himself in on goal and as cool as a cucumber stroked the ball low to the bottom right hand corner of the net to make it 1-7 to 0-5.

Shane Barrett kept Ballymore in touch with his second point of the game but Caragh kicked on with points from Dan Campbell (free), Kevin Campbell and Daniel Murray to open a seven point gap, 1-10 to 0-6, with 51 minutes on the clock.

Simon Murphy and Cathal McKennedy exchanged points before Ballymore hit two on the trot from Tommie Archbold (45) and Simon Murphy but it Darragh Swords (free) pushed the gap out to six points as the final whistle arrived, with Caragh booking their place in the semi and setting up a meeting with the winners of the Leixlip v Ballyteague quarter.