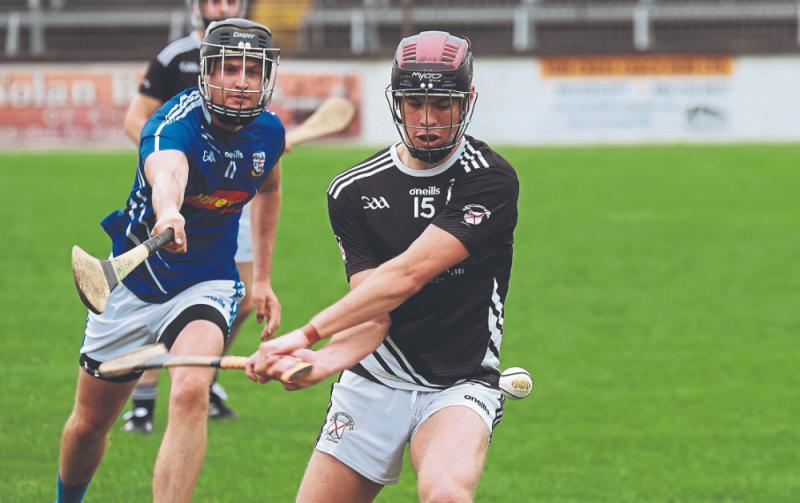 Maynooth shocked Celbridge to reach the Senior Hurling Championship final. An incredible moment for Maynooth and their management staff as they reach a county final just a year on from being an intermediate hurling outfit.

Celbridge were the favourites for this but nobody told Maynooth that and spurred on by a tremendous travelling support they were at it from the start.

Start as you mean to go on as they say and just 30 seconds after referee Raymond Kelly’s first whistle the ball reached Maynooth’s Cathal McCabe who turned and sent a stunning score gliding between the posts.

The sides battled hard early on and both had their share of wides as they looked to settle into this huge game. The biggest gap between these two sides was three points and that was reached on the 17 minute mark in Celbridge’s favour.

And what a way to do it as wing-back Kevin Murphy juggled the ball past two men, flicked the ball in the air and while standing much closer to the sideline than the centre spot, stuck it over.

Maynooth, as they did all game, battled hard and clawed their way back on the scoreboard. That being said they were not without quality as fine scores from Cormac Nolan and Adam Jordan brought the side’s back to within a point of one another.

Celbridge would finish the half strong, driven forward by midfielder Billy White they entered the break with a two-point lead. White scored two great points just before the break and finished the day as his side’s top scorer with 0-4. In a game where a lot of Celbridge stars didn't deliver on the scoreboard, such an accusation could not be aimed at the midfielder.

Maynooth started the second half with the same verve that they did the first, culminating in a familiar sight on a wet evening in Newbridge, David Qualter slotting a free-kick between the posts.

The sides were inseparable following Qualter’s next score just before the forty minute mark as he levelled to make it 0-10 each.

The sides traded with minimum of fuss to either side but the moment that got the crowd off their feet was when the ball was sent in to Maynooth’s Matt Melia. Melia took the pass into his stride and while being pushed wider and by the Celbridge defence, Melia let fly and sent the crowd into rapturous applause with a superb point.

The tightest of angles and more than just one point, a moment of magic that gave his team and the support a huge lift. Melia’s score set off a run of four Maynooth scores on the bounce. A brilliant spell that neither side had managed to have without reply from their opponents.

Cormac Nolan would draw the sides level, but the game deciding efforts would all come to the hurl of one man. With desperation and tired legs came fouls and for Maynooth there was only one man standing in the wind and the rain for the job, David Qualter.

After two points at either end by two talismanic figures in Qualter for Maynooth and Gerry Keegan for Celbridge the sides were level as we entered additional time.

Following a year to forget with injuries and missing out on Kildare’s Christy Ring exploits, it was Qualter's time to shine. But it being a star man’s time to shine doesn't mean he will.

Celbridge gave away a foul in the opposition half, Qualter walked towards it and set his sights for goal from his own 65-metre line.

It’s often hard to see the destination of a score until it has dropped over the bar, but a booming Maynooth voice gave away where this one was heading. About half way through the sliotar’s journey, with the crowd in near silence, the entire ground heard “GO ON DAVEEEY” as the man standing beside Qualter was certain where this one was going.

The voice was soon followed by teammates and fans alike as Qualter had stuck it over in the biggest of moments, under the highest amount of pressure.

Maynooth added a couple more to the scoreline with one in reply before the referee's final whistle, they fell to their knees in exhaustion and celebration of a famous win.

“It’s absolutely fantastic, it’s only twelve months ago that we were down in the rank below in intermediate. We felt we had something to prove, we battled hard for three or four years before this to come up. I said it this time last year that we’d have a mark on the Senior Championship and we have certainly left it,” Walsh said.

In a passionate and emotional chat on the field post-match, which could only endear you to the Maynooth boss, he cited Jurgen Klopp's famous phrase for his team.

“They are mentality monsters. We have had this all year, we played Ardclough here in the prelim round and they took us to extra-time. We were down four or five points after they got two quick-fire goals in extra time.

“Our guys never panicked, there was no panic. They knew if they were in it coming down the home straight they’d be in a final in a couple of weeks,” Walsh said.

It was easy to see the work that had been done off the field as Maynooth finished strong to claim a brilliant win and a county final spot.

Walsh said of his team's work-rate, “We like to think we are an industrious team. There is no room for egos here, we go out and we work hard.”