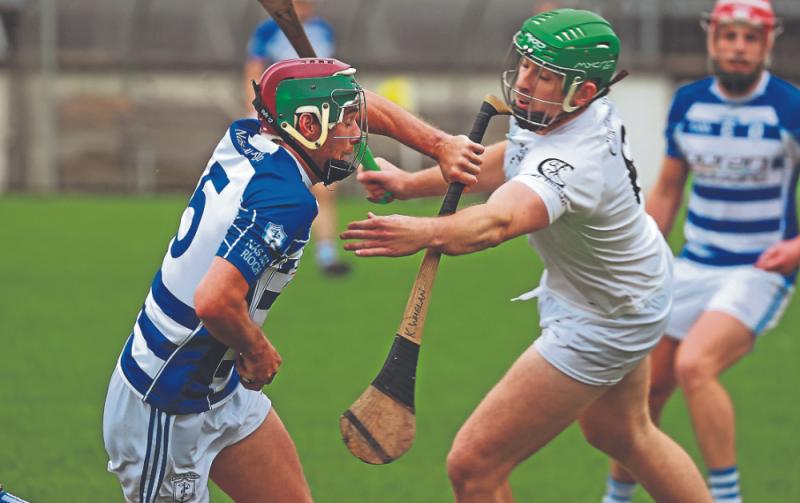 Naas showed the depth of talent they have in their squad, as without the services of a few of their most experienced players — including Ross Kelly, Richie Hogan, and Shane Ryan, they still had way too much pace and power for a Clane side that, in fairness played some good hurling but just lacked that little bit of extra that makes the difference between title contenders and the rest.

On a wet, miserable afternoon at times, this SHC semi-final did not throw in until 5.30 and while earlier in the afternoon it looked a lack of light might affect the game, those in authority must have breated a sigh of relief when the game was finished without any bother.

Naas manager, Tom Mullally, express his delight at reaching another final saying “any day you can win a senior hurling semi-final is a good day” adding “we will now be concentrating on the final against Maynooth, who had a fine win over Celbridge earlier today.”

The impressive James Burke, opened his and his side's account after 40 seconds with a converted free and soon after, Harry Carroll, who had a fine game throuoghout, found Jack Sheridan who duly fired over.

Clane opened their account soon after that when Brian Healy but Naas were putting on the early pressure and another Burke point followed by the first goal of the afternoon.

Again James Burke was involved, along with Cathal dowling and Simon Leacy, the latter firing to the net in a great finish to the left hand corner of Paddy McKenna's net to lead 1-3 to 0-1 with just five minutes on the clock.
Sean Christanseen and a Paddy McKenna free reduced the deficit before Cathal Dowling fired over the first of his four of the day.

Midfielder Burke was involved in goal no. 2 as well, this time a long ball in broke and there to fire to the net with a pull along the surface was Jack Sheridan.

As the rain came down heavier so did Clane's woes grow with two pointed frees from the stick of James Burke.
A ball sent into the danger area by Harry Carroll was gathered by Brian Byrne, who twisted and turned before being fouled, Burke converting the inevitable free.

A free from Paddy McKenna fell short and keeper Cormac Gallagher quickly found Sean Gainey who in turn found corner back Peter O'Donoghue who fired for an impressive score.

McKenna made a fine save to deny Jack Sheridan who was set up by a great cross-field ball from Brian Byrne.
James Burke fined over from distance before Clane added two quick points from Aidan Mooney and a Brian Healy free. Cathal Dowling added a point for Naas before the break as the champs led 2-11 to 0-6.

Despite Naas hitting four early second half wides they also quickly added another point from Dowling before Jack Sheridan added his second goal, this time he gathered a long deliver, turned and smashed passed Paddy McKenna.

Brian Healy replied with two converted frees but James Burke replied with two similar scores for Naas.
Bernard Deay and another free from the stick of Brian Healy left the score at 3-14 to 0-10 mid-way through and while the next four points were equally shared it was Naas who continued to dominate the score board, hitting the final three points of the game, the most prominent a brilliant side-line cut from five paces or so inside his own half from the mercurial Jack Sheridan as the final whistle arrived the champions firmly on course for another title on a score line of Naas 3-20 Clane 0-12.

Naas may have made it safely, and comfortably through, to another senior hurling decider, but manager Tom Mullally, pictured, said he felt his team did a good job especially in the first half.

“Any day you win a semi-final is a good day and in fairness to Clane they asked questions throughout the game and kept pushing to the very end and our lads had to push themselves to get the final result out of it.

Missing a number of players through injury, some long term but manager Mullally said he felt “those injuries did not affect our plays, we have always stressed the importance of our panel and this is where our panel needs to step up to the plate and I think today shows that have and any day you come through a semi-final and you are in a county final , to be fair to our group, the honesty and the commitment has show itself to be true.”

Naas will meet Maynooth and Mullally said he felt that “Maynooth have settled very quickly into senior hurling, they have served their apprenticeship in intermediate, have improved month on month and in terms of hurling they are probably the form team at this point of time and I think they will pose a huge battle for us in a few weeks time.”