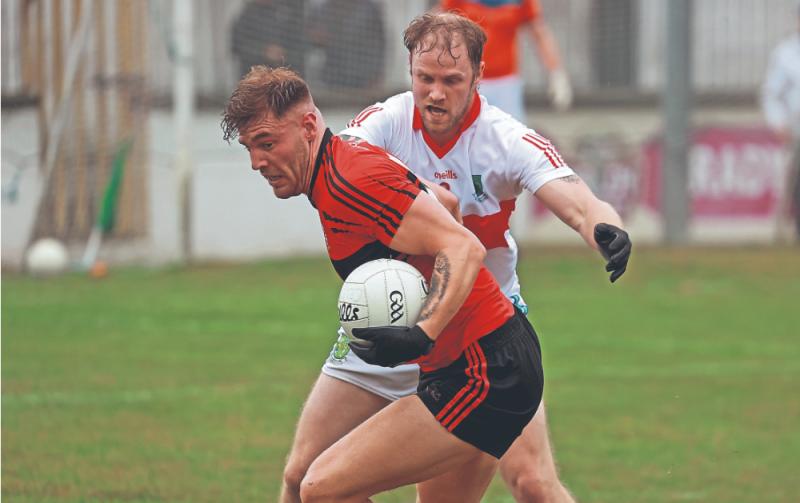 The hard-working Celbridge midfielder, Kevin O'Callaghan, seen here in action against Johnstownbridge in the SFC quarter-final

It's semi-final time this weekend in both senior and intermediate football championships and what an interesting, even intriguing, line-up we have in both competitions.

JOE MALLON SFC SEMI-FINALS
The first of the senior semis sees county champions, Naas, go head-to-head with Celbridge and while there is no doubt that Naas are the overwhelming favourites it could be a potential banana skin for the boys from the county town.

Celbridge will have no pressure on them and despite their dismal record in the semi-finals, this being their ninth in a row and with eight defeats out of the nine, few are expecting the boys from Hazelhatch to improve on those horrible stats.
Naas may have come through the perceived easier route in 2021 but that is certainly not the case this time around.

A great crowd at St Conleth's Park in Newbridge for that much awaited quarter-final which saw Sarsfields dominate the opening half, granted playing with a strong breeze, but such was their dominance at half-time the lead of six points looked more than decent.

Naas, on the other hand, looked off-the-pace, unable to get into any kind of a free-flowing stride, they just looked stale, under pressure and off the pace.

Sarsfields no doubt felt they could (should) have had a bigger lead at the break, deploying Tadhg Hoey at full forward as they did against The Moores, was causing a lot of problems for Naas, while Ben McCormack and Barry Coffey in particular, were causing big problems also, while Davy Burke's lads were on top in the middle.

However, on the resumption Naas took complete control, dominated the middle third and with Eamonn Callaghan rolling back the years, quickly cut the lead back before going ahead.

Sarsfields got a goal, more or less against the run of play, but it was enough to edge them back in front. But there was no denying the champions, a penalty, brilliantly converted by young Kevin Cummins, saw them back in front and there they stayed until the end recording a memorable victory.

And remember that despite losing Darragh Kirwan in the 38 minute to a second yellow and Alex Beirne picking up a black reducing Naas to 13 for a ten minute period, so all in all a very impressive victory and display (albeit in the second half) and one that will surely give them huge confidence.

Celbridge had their expected win over Johnstownbridge in the second quarter-final. Two teams that have in the past, on many occasions, failed to produce the goods when expected to do so.

Having said that, Celbridge do possess some talented players, from keeper Shane McNamara; present county men Kevin Flynn, Mick O'Grady, Fergal Conway and the extremely hard-working Kevin O'Callaghan; add in Hugh McGrillen, Paddy Brophy, Tony Archbold and Aaron Browne, amongst others, and one can only scratch one's head as to why the Hazelhatch brigade have not gained more honours in recent seasons.

Taking everything into consideration, form – past and present – experience along with what Naas have gained in the last 12 moths or so, hard to go against them.

Verdict: Naas to advance but only if they bring their 'A' game; no doubt Celbridge, on paper at least, are a talented bunch, but everything points to the champs making it through.

IFC semi-final: BALLYTEAGUE V CARAGH
Caragh have been impressive this season, even if they had to go through the pre quarter-final route to get here but they had a fine win over Ballymore Eustace, the surprise team of the championship but Caragh, while under pressure early on, got themselves together and came through that test winning 1-12 to 0-9.

Caragh have a fine blend of youth and experience and while it took a while for them to get into their stride in the quarters once they hit the front there was no going back.

Kevin Connor is an experienced player, Eoghan O'Haire fine midfielder and free taker; Danial Lynam strong up front; Jake Corrigan an impressive forward as are Darragh Swords and Kevin Campbell, so all and all more than a decent side.
Ballyteague caused a bit of an upset defeating favourites Leixlip in the quarter-final.

It was a victory they thoroughly deserved and while Leixlip did have their chances, at the start of both halves in particular, it was The Larks who took control, pulling clear in the second half, mainly thanks to the fine display of both Jimmy Hyland (scored 1-7) and the impressive Fionn Murphy. Seamus Hanafin did a lot of good things around the middle, David Randles is more than a decent no. 3 and overall that win over Leixlip will give them a huge boost.

Have to say I have been impressed with Caragh this season, few would have expected Ballyteague to make it thus far but have no doubt they will certainly give it everything.

Verdict: Have changed the view on this one a few times but in the end will stick with Caragh to get over the line.

Sunday sees semi-final no. 2 with the meeting of Sallins and Castledermot at St Conleth's Park.
Sallins have been a revelation this year, an excellent team with no shortage of talent throughout and they possess some top quality forwards in particular, Colm and James Dalton, Jamie Cox and Paul Farrelly to name just a few. Luke Kelly caught the eye last week while Luke Killian and Darragh Mangan are a formidable midfield pairing.

Castledermot are always a tough nut to crack, maybe not be one of the more flamboyant of sides but difficult to defeat nevertheless.

They made it thus far following a tough clash with Monasterevin, a game they won 1-8 to 0-9.
Gavin Keating is as good a free taker in this grade as there is around, Shane Nolan is a fair keeper while Bryan Nolan, Gavin Farrell are not short of experience.

Verdict: Have a fancy for Sallins, Pat Winders has done a fine job, they have last season's experience to fall back on and they should just about have enough to progress to the decider.

JUNIOR FOOTBALL SEMI-FINALS
Grangenolvin take on Kill in the first of the semi-finals on Friday evening in Hawkfield. These sides met earlier in the campaign with Kill recording a resounding victory, 3-15 to 1-11. Kill finished joint top of the division along with Straffan with Grange just a point further back so it could be a very close and exciting contest.

Kill's only defeat was against Straffan while Grangenolvin dropped that other point in a draw with Rathcoffey.
Verdict: Both will be anxious to advance to the final but on what we have seen to date Kill look that bit stronger and can book a final spot.

Straffan take on Robertstown in semi-final no. 2. Robertstown operated in Group A and while their form was somewhat mixed at times the only two games they lost were to the top sides, Straffan and Kill.

Straffan lost just the one game but seemed to have recovered from that set-back while Robertstown do not seem to be as strong as heretofore.

Verdict: Straffan get a confident vote to advance.

Athgarvan take on Cappagh in a play-off JFC decider. Top two teams in the Group B and when these sides met earlier it was a close encounter with Cappagh edging it by a single point – 2-10 to 0-15.
Very little separate them, Cappagh after going five games undefeated lost out to Grangenolvin, 1-14 to 0-5 but may get back on track on Saturday in this one.