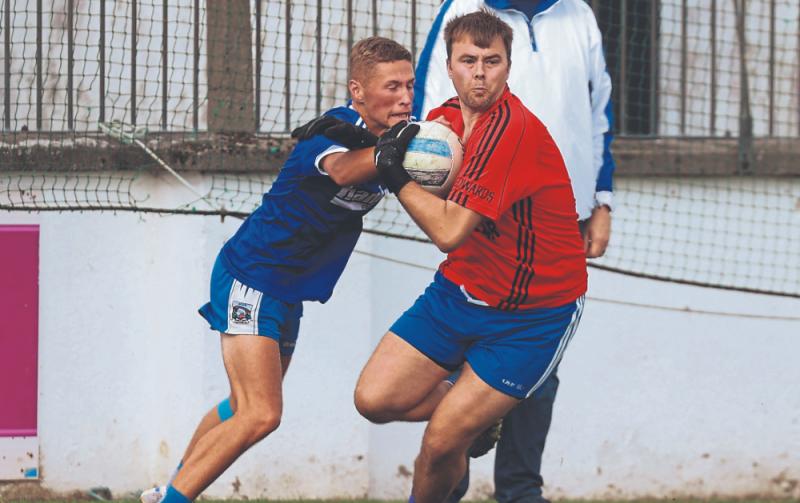 Straffan claimed victory over Robertstown to set up a local derby Junior Football Championship final with Kill.
Roberstown set their stall out early as they quite quickly fell into a deep lying formation. Although it did reduce Straffan’s attacking output to some extent, it meant when they won turn-overs they found it almost impossible to get themselves up the pitch.

The opening score of the game came from Straffan full-forward Austin Allen, as the ball was sent quickly into him as Straffan looked to break through the lines. Allen turned quickly and fired over the bar.

The opening exchanges looked more like an attack against defence exercise than a semi-final as Robertstown kept their shape with every member of the starting 15 in their own half.

Andy O’Neill was next to get on the scoreline as he found space amongst the raft of bodies and made 0-2 to 0-0 after ten minutes.

Austin Allen would add another to his tally and you wondered how many scores it would take for the trailing side to react and look to get on the scoreboard themselves.

Just after the 15 minute mark, Roberstown were presented with an opportunity to put their mark on this fixture when Straffan’s Rob Kelly was given a black card for an off-the-ball challenge.

Robertstown, to their credit, made the most of this advantage as they registered their first score of the day as Jason Butler knocked one over the bar. However half way through Kelly’s time on the sideline they would be presented with a chance to punish the 14 men of Straffan.

Robertstown centre forward Brion Kennedy was sent through on goal and was striding towards Matthew Duggan in the Straffan net. You could have sworn Kennedy had these chances all the time as he calmly slotted in the bottom right hand corner. The finish was as cool as you like and with still five more minutes with a man advantage Robertstown were now level.

The sides entered the break level as the traded scores from then on. The second half would provide little in the way of scores early on, with 15 minutes gone after the break, the sides had scored just one point a piece.
They would not be separated for more than a couple of minutes until the clock hit 60 minutes.

Extra-time looked a certainty as tension built and the sides looked devoid of ideas to get that crucial score. But it did come as it was second half substitute Declan Reilly that would put his side ahead on the hour mark.

Reilly spun off his man and slotted the ball between the sticks raising the most important white flag of the day so far.
The score was followed two minutes later by another in Straffan’s name that would put this game to bed.

Game at a glance

The Straffan full-forward found space in a part of the pitch where it was extremely scarce and turned the chances he made into four crucial scores. Not an earth shattering tally but in a game with so few scores it was a vital contribution.

TURNING POINT
Rob Kelly’s black card turned what could have been a much more routine victory into a really tight game. Straffan were in control when the sides were 15 against 15 and losing Kelly could have cost his side dear. 1-1 of Robertstown’s 1-5 scoreline came in that ten-minute spell.

TALKING TPOINT
The biggest talking point from this game was perhaps what Robertstown could have done had they not played it so safe early on. The eventual losing side looked dangerous when they did attack their opponents and more chances for the likes of Brion Kennedy in this game could have proved fruitful.

WHAT NOW?
Straffan will now face Kill in a local derby for a Junior Football Championship final. A clash certainly not to be missed as the typical tension and aggression of a Championship final will be amplified by the local bragging right implications. Straffan season is now over