IRELAND WEATHER: Weather forecast for Ireland for the coming days from Met Eireann 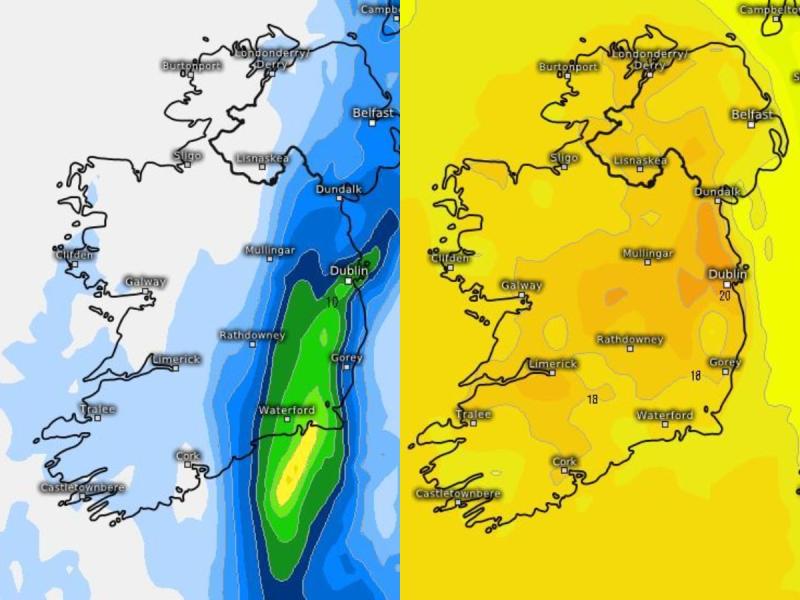 The weather forecast for Ireland for the coming days and into the weekend from Met Eireann is for the weather to be changeable with rain or showers at times. There will also be heavy falls of rain at times with temperatures in the mid to high teens.

According to Met Eireann, it will be dry this morning and for a large part of today across much of the eastern half of the country with some early bright spells. Cloudy elsewhere with outbreaks of rain and drizzle in western coastal counties, which will spread further east later in the day. Rain will turn heavier and more persistent on western coasts this evening. Highest temperatures 17 to 20 or 21 degrees, best values in the east. Becoming breezier with southerly winds freshening, increasing strong and gusty along the Atlantic coast.

Thursday night will be cloudy with scattered outbreaks of rain to begin, however a heavy and more persistent band of rain will cross the country eastwards overnight which may lead to spot flooding. Breezy with fresh southerly winds, strong at times near coasts. Temperatures not falling below 13 to 15 degrees.

The weather forecast for Ireland for Friday is for the weather to be wet across the eastern half of the country with overnight rain continuing and further heavy falls bringing a continued risk of spot flooding. Brightening up quickly in the west and south with sunshine developing and showers to follow. Rain will linger in eastern and northeastern counties into the evening. Highest temperatures of 16 to 18 degrees with fresh to strong southerly winds persisting for a time near eastern coasts, winds easing to a mainly light northwesterly elsewhere.

Dry in many areas on Friday night with long clear spells and just scattered showers. Some fog patches will form inland later in the night. Lowest temperatures 6 to 9 degrees with light northwest winds becoming southerly towards dawn.

Saturday will be largely dry with sunny spells to begin and a few showers, however rain will push into western counties later in the afternoon. Highest temperatures of 15 to 18 degrees in light to moderate southerly winds, increasing fresh on western coasts.

Cloudy to overcast on Saturday night with rain in the west spreading eastwards during the night. Lowest temperatures 9 to 12 degrees with light southerly or variable winds.

The weather forecast for Ireland for Sunday says the overnight rain will linger in many parts during Sunday, becoming drier and brighter later in the day. Highest temperatures of 15 to 18 degrees in a light northerly breeze. Sunday night will be mainly dry with clear spells, and some patchy mist or fog. Lowest temperatures 6 to 10 degrees.