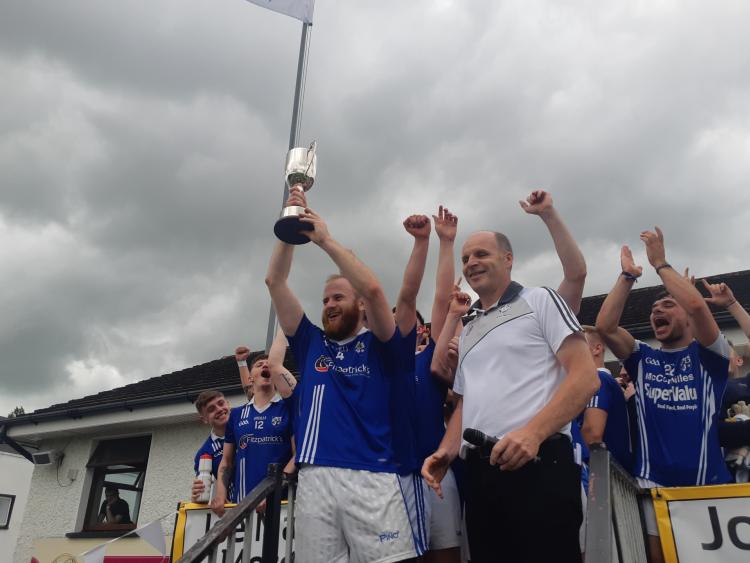 Both teams had secured their promotion to Division 2 in 2020 a few weeks back but silverware was on offer here and Monasterevin were the ones who took it with a polished display where Paul Maloney, Kevin Mulpeter and Cormac Brady got the all important goals.

Sallins were without star forward Conor Herbert and his absence was keenly felt as Sallins struggled to run up an adequate tally even if Jack Sharkey and Alan Marshall made a pretty good attempt at it.

It was a tightly fought opening to the contest with Black Cards the main topic of discussion as referee Billy O’Connell gave one to each side with Monasterevin’s Lennie Havens getting one for a pull down while just a few minutes later Sallins midfielder Fergal Swan got the same faith for a bodycheck off the ball.

Monasterevin were the one’s to open the scoring as Padraig Nash converted a free before Sallins equalised with a well taken Alan Marshall score from distance.

Monasterevin had the superior attacking threat up front and they soon used it to the full effect with Nash and Ryan Bannon both knocking over frees before Kevin Mulpeter who was a substitute for the black carded Havens kicked in a 14th minute goal after Sallins goalkeeper Dan Sweeney had originally batted away a shot from Kevin Fitzpatrick.

Sallins replied with a point from Jamie Cox but further scores from Nash and Kevin Fitzpatrick had the Blues six points clear.

Sallins really struggled for scores in the opening half and after Ben Caulfield had a shot blocked on the line by Cormac Stapleton, Monasterevin went up the other end and found the net for the second time with Paul Maloney stroking home on the back of a Kevin Dunne pass inside.

Maloney and Bannon then kicked consecutive points and while Sallins rounded off the half’s scoring with Cox they still had a mountain to climb at the break trailing by ten points.

Sallins did their best to start a comeback at the start of the second half when they kicked three points in as many minutes with a pair of Jack Sharkey efforts followed up by Marshall registering his second point.

It was joy that was short lived though as Ryan Bannon sold a lovely dummy in the process of scoring which came before Nash added a brace.

Sallins responded with Sharkey, Marshall and sub Adam Kane but they needed a goal if they were to reel Monasterevin in and after Sharkey was denied close in by Aaron Bannon, last years beaten Intermediate finalists took full advantage with Cormac Brady kicking in their third goal after he was found by a quick exchange from Bannon and Nash.

Sharkey and Nash then shared points before Sallins got their long awaited goal when David Foley found the net in stoppage time.

Sallins did end the game well as Ben Caulfield had a shot saved and after an effort from Kevin Foley was going towards goal it was blocked by a foot and a penalty was awarded but with the last kick of the game Sharkey was denied by Bannon as Monasterevin took the win.