Raheens survive as the House fall through Senior Championship trapdoor 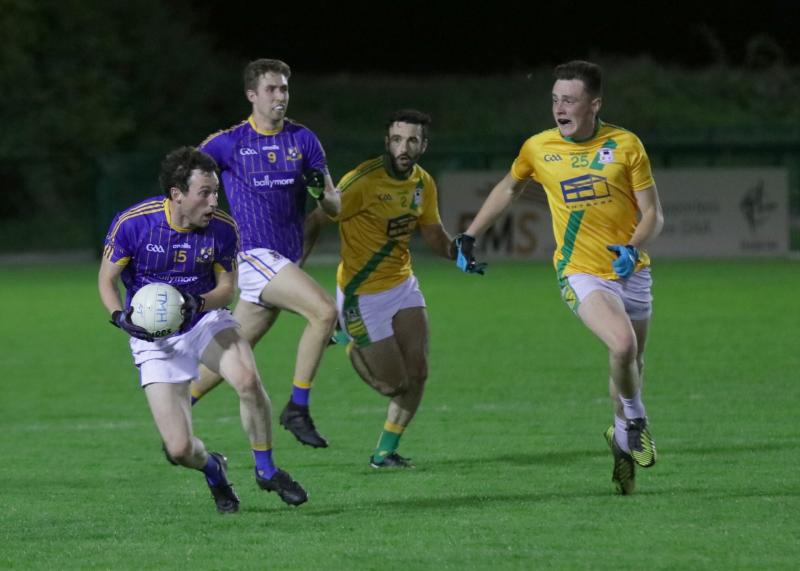 For all that was at stake it turned out to be quite the contest as Raheens maintained their Senior Football Championship status with a one point victory over Two Mile House.

David Malone’s 57th minute score which was one of four for the wing forward eventually settled the result in the direction of Raheens after a calamity like final few minutes.

Sub Jack Collins had Two Mile House within a point but no matter how hard they tried they couldn’t force an equaliser as last year’s Intermediate winners return to that grade at the first time of asking.

Raheens were the dominant team for the majority of the first half when leading by 0-7 to 0-3 but they couldn’t quite shake off their opponents after kicking a number of wides and the House took full advantage with an Aidan Casey goal giving them a shock 1-7 to 0-9 lead at the break.

Two Mile House were three up at one stage of the second half but Raheens kept grinding away and they eventually reeled in the deficit with points from Colm Power, Paddy Woodgate and David Malone and in the end that was enough to get the through.

In what turned out to be a thrilling game Raheens started the brighter and were 0-3 to 0-1 up within five minutes of the start with points from Liam Power, Colm Power and Paddy Woodgate.

Andy May got Two Mile House’s sole point during that period but in an end to end opening they were soon level with an Aidan Casey free coming hot on the heels of a fisted effort from Tony O’Connor.

Raheens went through the gears afterwards and kicked the next four points with Woodgate, Power, David Malone and Alan Igoe all on target.

Two Mile House replied via former manager Niall Browne and Matt Kelly but after Malone fired over when he had something of a goal chance three points separated the teams.

Raheens should have been further clear at that juncture but they squandered a few chances with just Woodgate getting on the scoresheet with a well taken outside of the left point.

Two Mile House didn’t drop the heads though with O’Connor and Casey extending their tallies and right on the half-time whistle they hit the front for the first time.

Peter Kelly launched a long ball into the square and after Niall Browne flicked down to Casey the corner forward blasted in a goal as Two Mile House went into the break ahead on a 1-7 to 0-9 scoreline.

The one point advantage quickly became three at the start of the second half when Casey and Peter Kelly both pointed.

Raheens looked in a bit of trouble at that stage but back to back efforts from Colm Power and Rory Donnelly got them within the minimum.

Casey and Woodgate who were both unerring on the frees kicked two apiece within the space of a few minutes as Two Mile House led 1-11 to 0-13 entering the final quarter of a pulsating game.

The aforementioned players kicked further successive frees as Two Mile House maintained the lead with only eight minutes remaining but it was from here that Raheens somehow found a bit extra as they kicked three on the spin with Malone showing all his leadership to point on the double while Killian Thompson also kicked a fine effort with the likes of Liam Power and sub Barry Winder heavily involved in both scores.

Two Mile House despite trailing by two weren’t finished and a point from Jack Collins had them within one.

Two Mile House then had chances to force extra time but some great work by Raheens in defence kept them out.

Raheens could have easily made it easier on themselves as Collie Power attempted to fist over in overtime but with the keeper of his line the ball hit off the crossbar and with hearts in mouths in the crowd the House poured forward but after the move broke down Liam Herbert blew the final whistle as Raheens hung on by the skin of their teeth.