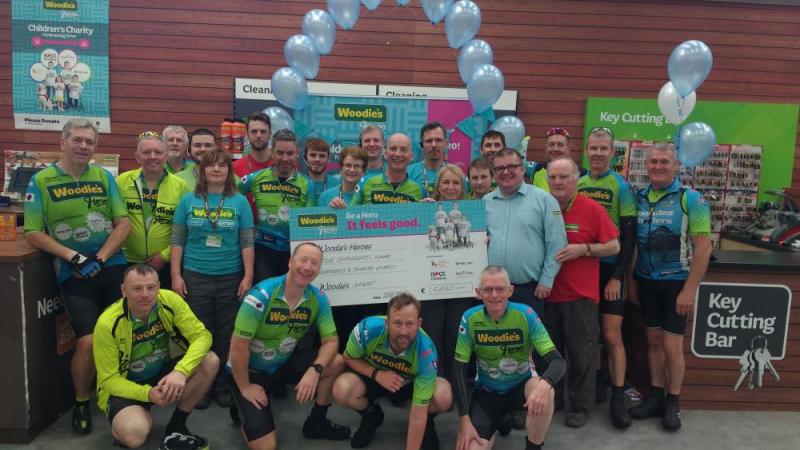 Naas staff at Woodies who raised over €5,000

This means that over the last five years, a whopping €1,554,511, has been raised for Irish charities by Woodie’s employees, suppliers and loyal customers.

Woodie’s teams around the country fundraised by organising everything from sponsored leg waxing to family fun days during the campaign, which ran from 22 July – 23 August.

Woodie’s of Naas and Newbridge (below) are incredibly proud of their achievement and efforts in raising this combined total of €10,029.92 for charities that will help the change lives of so many. 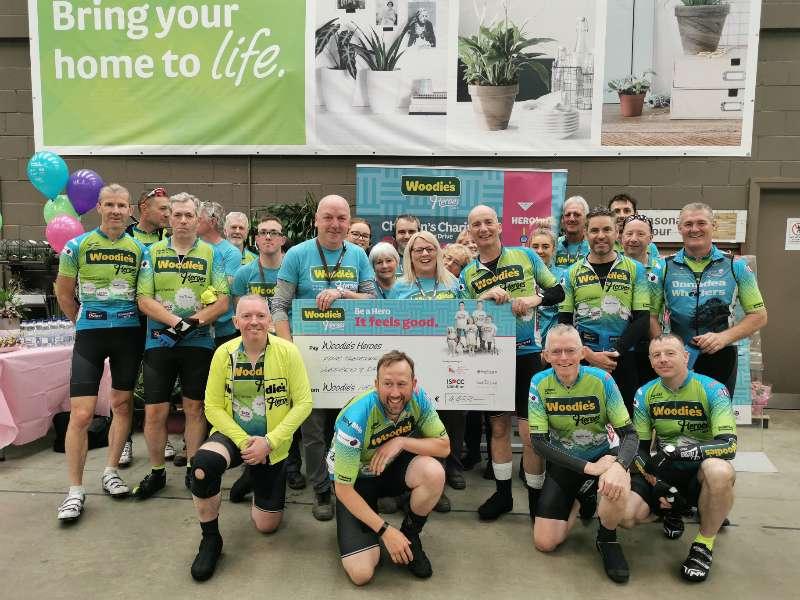 The fund-raising culminated in a grueling 1,600km cycle undertaken by Woodie’s colleagues over five days in August, where the cycling teams called into each of the thirty five stores to collect the monies raised by each store. On the final day the cyclists were greeted by family and friends at Woodie’s support office Tallaght in an emotional reunion, with the news they had almost €400,000 in the kitty for four worthy causes!!

This year’s chosen charities were Temple Street Children’s Hospital, children's cancer charity Hand in Hand, Autism Assistance Dogs Ireland and ISPCC Childline. All strive to change the lives of Ireland’s most vulnerable children and their families around the country with their extraordinary selfless work.

ISPCC Childline is Ireland’s national child protection charity. The organization works towards the prevention of cruelty to children and provide support services which operate 24 hours a day. The outstanding amount raised by Naas and Newbridge will greatly benefit both this Leinster charity plus the other charities.

Each charity chose their own little hero to represent them, from plucky two-year-old Freya who was diagnosed with a tumor and underwent months of intensive treatment, to Jack with Autism whose isolated world was transformed with the arrival of Thorpe the dog.

Commenting on the result: ‘The Woodie’s Heroes campaign has been an outstanding success. The prospect of raising one and half million when we started five years ago seemed a remote possibility, but after much hard work and thanks to the incredible support and imagination from everyone who works at Woodie’s along with the enormous generosity  of our customers and suppliers, we have achieved our dream. We want to say a huge thank you to everyone! ‘Woodie’s CEO Declan Ronayne.