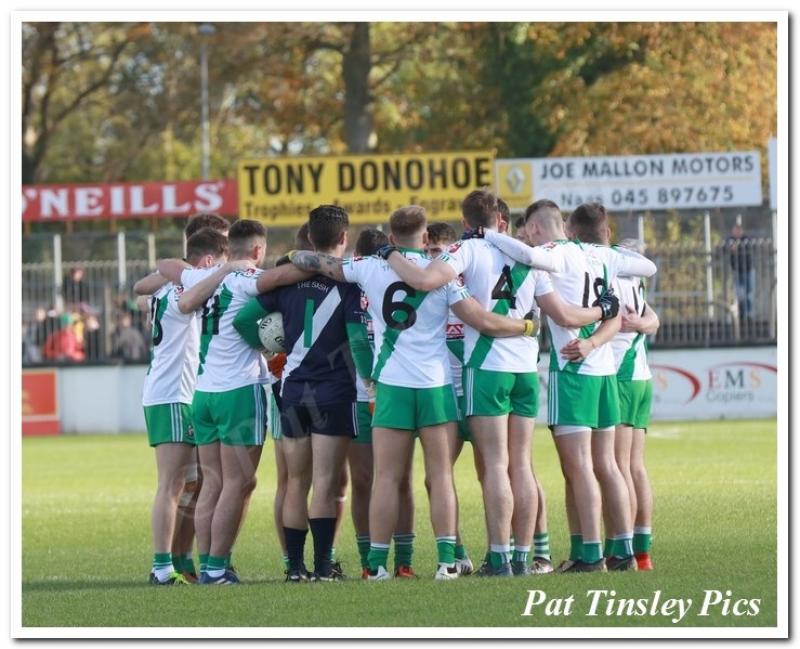 Sarsfields in a huddle prior to their Senior Football Championship victory over Moorefield. Photo: Pat Tinsley

It’s a busy weekend upcoming for Kildare clubs as Sarsfields, Ballymore Eustace and Monasterevan all make their Provincial bow.

All three are away from home and most eyes will be on Netwatch Cullen Park tomorrow afternoon as recently crowned Senior Champions Sarsfields make the short journey to Carlow as they take on Eire Og.

Eire Og achieved three Carlow titles in a row a couple of weeks ago and while Sarsfields stopped the Moorefield treble effort it’s still a big task for the Sash.

It’s a task that was made a lot tougher when Matty Byrne and Ben McCormack departed for Australia last week.

The two men were incredibly key in helping Sarsfields get over the line in Kildare so Davy Burke will need to have a plan to neutralise their absence.

Eire Og easily got the better of Palatine in the Carlow decider before scoring four goals against Castletown of Wexford in the opening game in Leinster.

They are a very experienced side who like to get men behind the ball and counter attack at speed with Chris Blake their main score getter while Darragh O’Brien and Sean Gannon are Carlow regulars who will need to be watched closely.

Sarsfields have a poor recent record in Leinster and they were beaten first time out in 2016 so to improve on that statistic they will need to be on the top of their game.

Prior to Sunday two teams that do have a good record in Ballymore Eustace and Monasterevan start their Leinster Championship campaigns.

Ballymore who were Leinster Junior Champions back in 2010 travel to Newtowncashel to take on Longford kingpins Kenagh.

Kenagh defeated Killoe Eire Og to take the Longford Title before getting the better of Berlin in the Leinster opener.

Ballymore have huge potential in their ranks although one worry would be the five week break since the County Final victory over Robertstown but if that doesn’t hamper them too much they have enough about them to make the next round with the firepower of Niall Murphy, Simon Murphy and Shane Barrett up front.

A half an hour after the throw in at Newtowncashel up in Louth Monasterevan will start their Leinster Championship when they take on Mattock Rangers.

Mattock Rangers are likely to be stern opposition after accounting for Bracknagh of Offaly in the last round but on paper this is a very talented Monasterevan side.

In Padraig Nash, the Fitzpatrick brothers, Ryan Bannon and Paul Maloney they have serious firepower and it’s hard to imagine that their Louth opponents would be able to stop them in that regard.

Going away from home in the Club Championship is always difficult but the Blues have a second Leinster Intermediate Title in their sights and they can begin that journey with a win on Saturday afternoon.