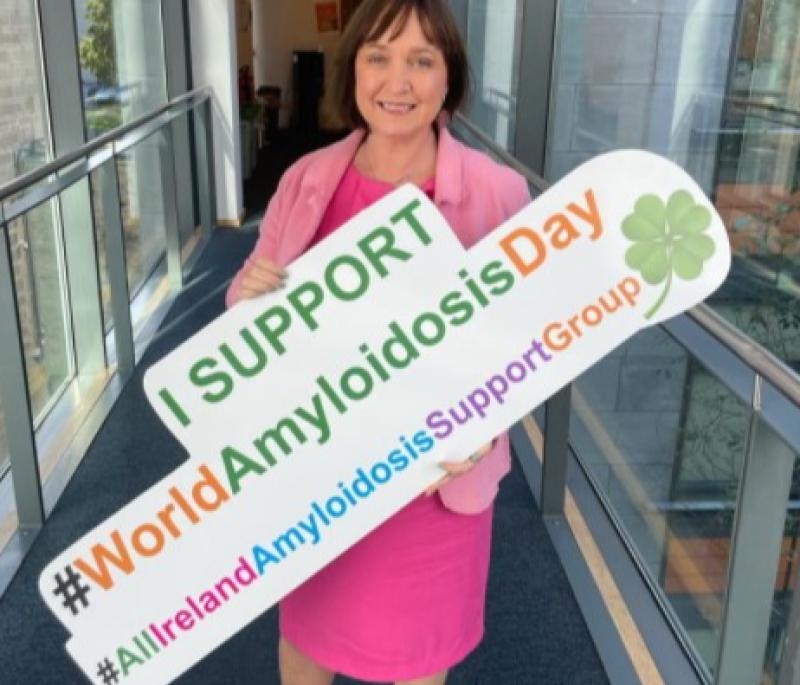 The first annual World Amyloidosis Day has been publicly celebrated by a Senator from Kildare.

Fianna Fáil Senator Fiona O’Loughlin posted a message about the day, accompanied with a photograph of her holding a sign provided by the All-Ireland Amyloidosis Support Group.

Senator O’Loughlin said: "I think we all have a heightened awareness of Amyloidosis in South Kildare, as a result of the advocacy of our local friend Pat Tinsley, who has suffered with the disease for some time and has bravely sought to raise awareness of the disease."

"The purpose of World Amyloidosis Day is to raise awareness of this rare disease. Unfortunately, according to the Amyloidosis Alliance, ‘there are no unifying symptoms that are common to all forms of amyloidosis."

She continued: "It is a rare, complex and multifaceted disease; the different forms of amyloidosis are very different illnesses, they are caused by an abnormal build-up of proteins in the body, that meld into plates that clump together and affect some organs negatively – generally the heart, the kidneys and the peripheral nervous system’.

"This means that a heightened awareness of the disease is crucial to ensure that sufferers are correctly diagnosed and treated as quickly as possible."

"On average, it is taking four years for a sufferer of amyloidosis to be diagnosed.

Senator O' Loughlin added that heightened awareness of this disease is "vital" for early detection and treatment.

"I have long advocated for sufferers of this disease, including for our local friend Pat Tinsley- and I am pleased that as a result of our advocacy, Patisiran, a lifesaving drug which can help treat Amyloidosis is now available through the HSE... But we need to ensure that people are being correctly diagnosed as early as possible so that this drug can be accessed, and its impact on patients is maximised," she concluded.

Last month, Senator O' Loughlin said that Minister for Health Stephen Donnelly told her that the drug Patisiran, which is used to treat Amyloidosis, will now be available for use in Ireland.

According to hattrguide.com, Amyloidosis (also known as hATTR) is a systemic disorder characterized by the extracellular deposition of misfolded transthyretin (TTR) protein.

Normally, this protein is a tetramer made up of 4 single-chain monomers.

TTR gene mutations are thought to destabilize the protein and cause tetramer dissociation into monomers, which aggregate into amyloid fibrils.

These amyloid fibrils then accumulate in multiple organs throughout the body, and it is estimated that there are only 30-35 sufferers of this rare but deadly and debilitating disease in Ireland.

In related news, Senator O' Loughlin has welcomed the news that an Autism-friendly unit at Newbridge school will open for enrolments soon.