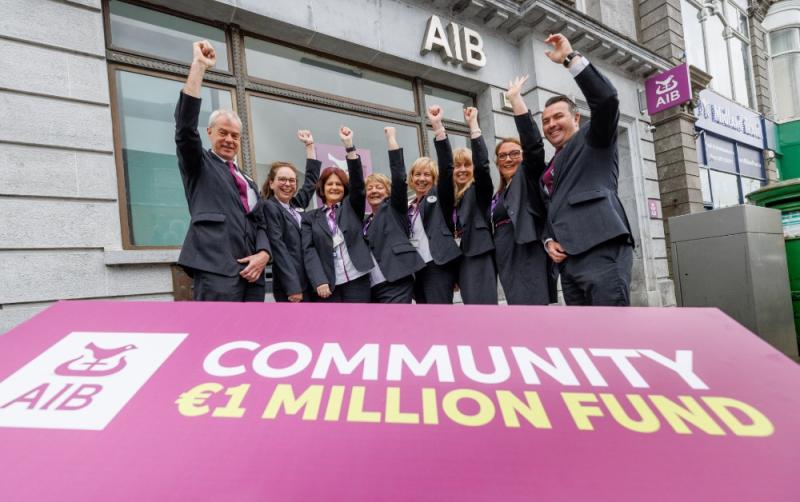 The AIB Group has today launched the AIB Community €1 Million Fund to support over 30 charitable organisations in communities across Ireland.

The bank is asking its customers and the wider public in Kildare, Carlow, Kilkenny, Offaly, Longford, Louth, Meath, Laois, Westmeath, Wexford, and Wicklow to nominate registered charities that connect with causes that matter most to them and their communities.

The fund will be distributed following an online nomination process, one for customers and one for employees, and will be split across five regions in Ireland – Greater Dublin, the Rest of Leinster, Munster, Connaught and Ulster. Customers and the public are required to submit the registration number of the charity they are nominating in order to complete the form.

Paul Maloney, AIB Tullamore Branch Manager said: “We are delighted to launch the AIB Community €1 Million Fund here in Tullamore to support the local charities that matter most to us in the area. We are inviting our customers and the public to nominate the charities they wish this new fund to support. There is so much activity and fundraising happening all over Tullamore, this fund will go a long way to help to those initiatives already doing so much to support their local communities’’

Nominations are open from May 12 and will close on June 22 of this year. The nomination form and full details on the AIB Community €1 Million Fund are available on the bank’s website.

The bank will separately launch a process for AIB staff wishing to nominate charities in their communities.

Once nominations are confirmed, the top six nominees for each of the five regions will be asked to present to an AIB regional panel.

The AIB Community €1 Million Fund follows other charitable initiatives already undertaken by AIB including the bank’s partnerships with GOAL, FoodCloud and Junior Achievement Ireland as well as our ongoing support of local charities.