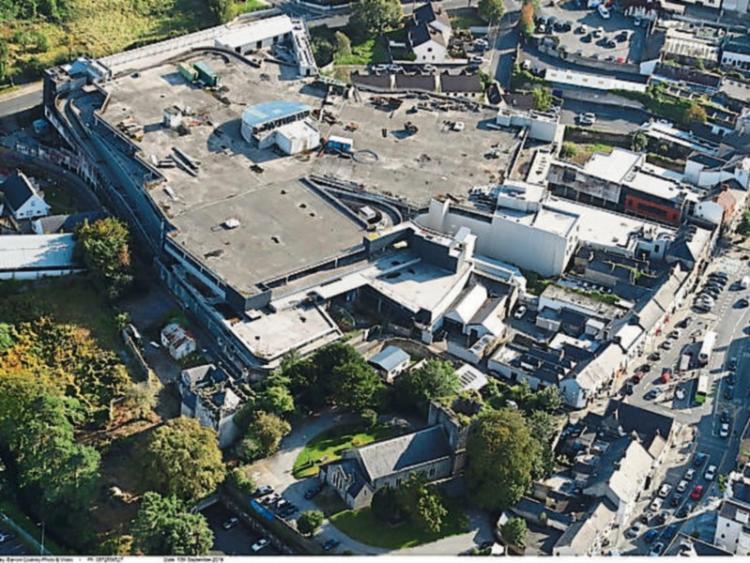 An aerial view of the structure which is to be transformed

Upwards of 300 jobs look likely to be created at the redeveloped  Naas Shopping Centre when the reconstructed building opens.

Local businessman Ger Roche of the Roche Group, proprietor of the Vista medical centre at Ballymore Road, is to develop the centre which was originally built by locally based developers Marshalsea  - and was originally due to open eleven years ago.

A planning application to redevelop the structure is expected to be made before the end of this month.

It’s not certain when or if permission will be granted, but Kildare County Council officials are anxious to see it open.

Planning applications generally take about three months to be approved or denied though a project of this scale is likely to take more than that and could be subject to requests for additional information by KCC.

“It could take one and half to two years to rebuild,” said Mr Roche, meaning it may well be open by Christmas 2022.

Mr Roche also said he hoped the centre would provide 300 to 400 jobs and this depended on the level of interest by potential occupiers.

An anchor tenant, likely to be a big supermarket chain, has not yet been identified but Mr Roche said that negotiations are ongoing with interested parties.

It is planned to open Ireland’s biggest pharmacy on the site, which will also have a full range of cosmetics.

And there will be between 70-80 apartments, most of which will be rented with an emphasis on providing independent living accommodation for older adults.

Another difference from the original plan will be a reduced number of shopping units -  to 20 from 40.

The redesigned structure sits on a 300,000 square foot (4 acres) site and will also provide offices with some of these being taken up by healthcare providers.

Mr Roche intends to start some preparatory work within three weeks such as cleaning up the interior and replacing some of the broken windows (the building has been subjected to vandalism as well as arson attacks).

“A lot of work has been done in the background and we have a good team working on this,” said Mr Roche.

The project manager is Celbridge resident Frank O’Rourke, the former Fianna Fáil TD who lost his Kildare North Seat in the final count to Sinn Féin’s Reada Cronin in the February 2020 general election. He was a first time candidate when elected in 2106 and was a FF director of elections in Kildare North.

Mr O'Rourke, a County Leitrim native, has extensive experience in the construction Prior to winning the Dáil seat he was head of operations at Irish Tar and Bitumen Suppliers, one of the leading manufacturers and suppliers of bituminous material for the road construction and road maintenance industry in Ireland.

Property advisory company Lisney are also involved in the project.

A guide price of €4.8 million - a fraction of the construction cost - was put on the  44 unit centre by selling agent, Cushman & Wakefield prior to the sale seven months ago.

The Roche Group developed the Vista primary care medical centre in the town. The €25m Vista centre opened 11 years ago and  hosts a comprehensive range of medical services to both public and private patients. The local K-Doc GP on-call service is also there as well as a medical imaging centre with general x-ray, ultrasound, MRI and CT equipment.

The original planning permission was granted in 2005.

However it never opened after Dunnes Stores reportedly had a change of mind about opening a store there.

Just over three years ago the National Asset Management Agency, which had  taken over some of the loans associated with the project, appointed a receiver which in turn led to the property being placed on the market.

In 2017 and again in 2018 (the Forge Inn) two fires took hold causing an undisclosed amount of damage.

Later in 2018 the three on site cranes which dominated the Naas skyline were dismantled in operation which necessitated a traffic management plan and came with a reported bill of €120,000.

At the time Fianna Fail TD James Lawless said the removal of the cranes  “takes away an eyesore which people have long been complaining about, particularly since the cranes have done nothing for some time.”