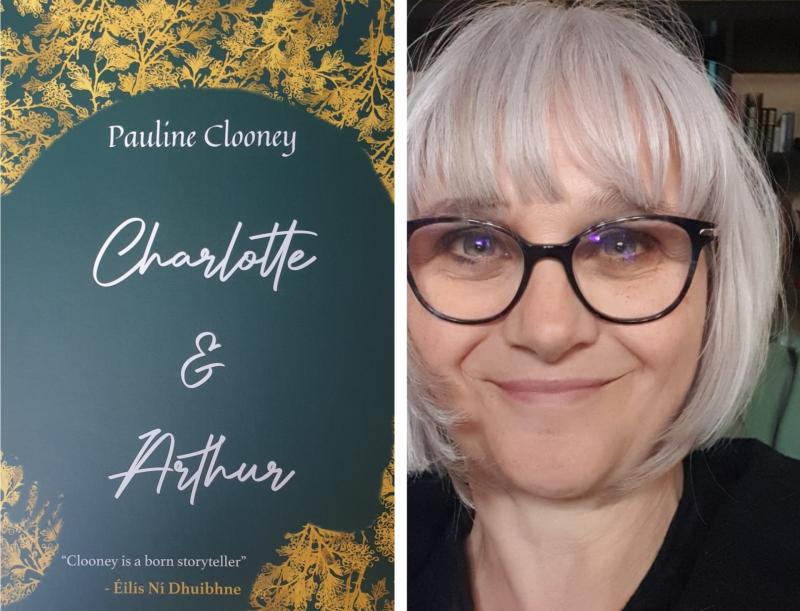 Pauline Clooney has been fascinated with the Brontës, the famous family of Yorkshire authors, ever since she was a teenager - and especially with Charlotte Brontë, author of Jane Eyre.

Now Charlotte’s honeymoon to Banagher, Co Offaly, with her Irish husband, shortly after the Great Famine and less than a year before the novelist’s own tragic death while pregnant, is the subject of the Newbridge woman’s debut novel.

Pauline first visited Haworth in Yorkshire, the home of the Brontë family, while staying with relatives in 1979.

Her grandmother bought her a copy of Wuthering Heights, and - in the romantic way of teenagers - she drew parallels between herself, an aspiring young writer with two sisters, and Emily, Anne and Charlotte Brontë.

Pauline’s early ambitions to be a journalist were put off by the ‘hard neck’ she’d have needed to do the job day-to-day. Instead she became an English and History teacher and spent many happy years at the Patrician Brothers Secondary School in Newbridge.

“But the Brontë thing never let me go,” she said. Pauline did a part-time M Litt on the life and works of Charlotte Brontë in Maynooth in the early 2000s.

She left teaching in 2017 to concentrate on her writing career full-time. By that stage, she had obtained an MA in Creative Writing from UCD, and was an accomplished and award-winning short-story writer who also founded and taught writing courses at the Kildare Writing Centre. She is also the 2021 recipient of the Dennis O’ Driscoll Literary Bursary awarded by Kildare County Council.

What was to become Charlotte and Arthur, the novel, started life as a PhD subject. But - following the guidance of her advisor to ‘get it out before someone else writes the story’, Pauline left the academic programme just before lockdown and turned her attention full-time to the novel.

Charlotte Brontë married Arthur Bell Nicholls, at the age of 38 in 1854. The proposal from the Antrim man, her father’s curate, saved Charlotte from the life of a lonely spinster - a terrible fate at the time even for a celebrated novelist.

Arthur was raised from the age of seven by a relative, Alan Bell, who was headmaster of the Royal Free school in Banagher, and later graduated from Trinity College.

Pauline, whose mother is from Banagher, noted that the couple’s wedding and Irish honeymoon has received scant attention from biographers.

“We have six letters she wrote from Ireland, so using those six letters, and what Arthur wrote, I put an itinerary together of those trip,” she said.

The book imagines the honeymoon trip from Charlotte’s point of view, to reveal something about who she was. The author also juxtaposed the idea of the honeymooners taking a trip around the country, including Cork and Trinity College in Dublin, with the reality and poverty of post-Famine Ireland.

“They spent nearly a week in Banagher with his relatives,” said Pauline. She says that the work of Alan Adamson, a Canadian academic with links to that family, provided her with invaluable biographical material with which to flesh out the story.

“I dip into a bit of Irish history at the time as they travel around. As Arthur was an alumni of Trinity, they visit Trinity when in Dublin, the Book of Kells and the Long Room feature in the book. I’m not sure if they went to the Botanic Gardens, but I couldn’t resist a visit.”

Charlotte’s happy marriage was to be cut short by her death from pregnancy complications the spring after her honeymoon.

Arthur cared for the Brontë patriarch, Patrick, after her passing - her three siblings had predeceased her - but returned to Offaly after Patrick’s death, when he didn’t get the Haworth Parsonage incumbency he had expected.

He married his cousin Mary-Anna - ‘she always had a romantic fondness for Arthur’, believes Pauline - and lived out his days as a small farmer in Banagher, even while the Brontës’ reputations grew in the years after their deaths.

“The sadness of it is that he’s not buried with Charlotte, he’s buried with Mary-Anna in the churchyard of St Paul’s in Banagher,” said Pauline.

The Portlaoise native describes her novel as ‘a real labour of love’. “In one sense, there’s a relief as well that I’ve done it and it’s out there now and I should really move on,” she said.

Pauline says the reception from friends and fans, particularly in Newbridge and Portlaoise, has been extremely supportive.

“I’m also getting some nice responses from people who are Brontë enthusiasts. One of the first reviews said that it is addressing a gap in their story which has never been fictionalised before, and barely documented.”

Pauline’s next novel with feature another famous, but often overlooked, Irish marriage, between poet WB Yeats and Georgie Hyde Lees, which she says is ‘a partnership that fascinates me'.

“When you mention Yeats, people talk about Maud Gonne, and Georgie Hyde Lees gets locked out. In more ways, she was a muse to him. They had a mutual interest in the occult and spiritualism.

“When they met she was grieving for her father, and WB Yeats came along, who was the same age as her father. It is a fascinating relationship.

“Writing about Yeats is a much bigger ask because of the amount of material pales next to what is available about Charlotte Brontë’s honeymoon.”

Charlotte and Arthur is available from Kildare bookshops including Farrell and Nephew in Newbridge and Woodbine in Kilcullen. It is published by Merdog Press. The official book launch will take place at Leinster Senior College in Newbridge this Friday evening at 7pm. Places are limited so tickets can be reserved via Eventbrite.