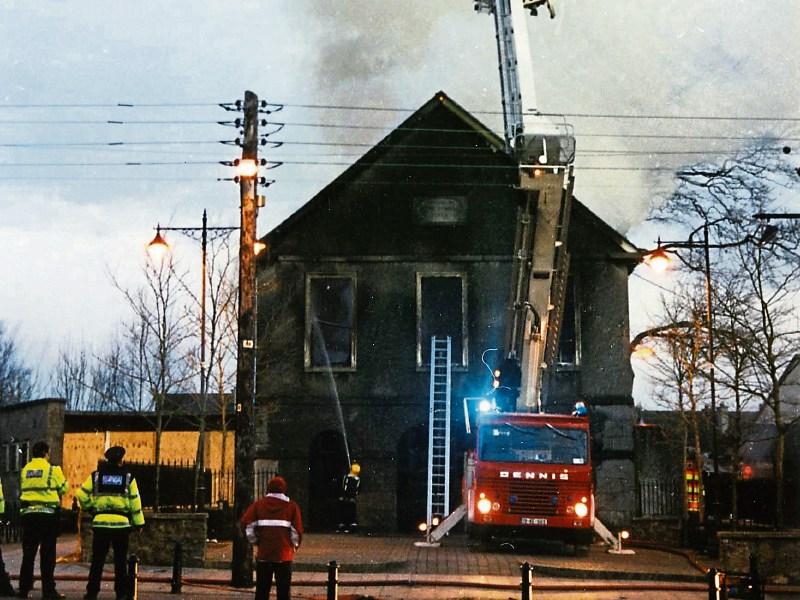 Newbridge courthouse was destroyed by fire almost 20 years ago

The former Newbridge Courthouse — which was destroyed by fire nearly 20 years ago — features in the June Fest local history project which is compiling an online archive of town buildings.

Fire crews fought the blaze at the 150-year-old building for about two hours after it broke out after 6 am on April 4, 2002.

The roof collapsed within two hours and it soon became clear that the historic landmark could not be saved.

The site of the courthouse was later developed as a communal space but local residents who contributed to the June Fest project have been sharing memories of the general Market Square area which held cattle fairs and was also the location of a dispensary and a sweet shop.

Paula Whoriskey said of the area: “That was our playground when we were children growing up in Eyre Street.

“We loved it and played so many different types of games there.

“I spent many hours hitting my tennis ball up against Mrs Grady’s wall. She owned the well-known toy and sweet shop on the front street.”

Greta Proctor also recalled: “I remember going to school and farmer’s would be bringing their cattle to it it was a marketplace.”

Dáire Barrett said: “My only memories are of attending the eye clinic in the dispensary as a child with my mum.”

Brigid Larkin remembered: “My late grandfather, Michael Dempsey, lived in a small house on the left of the Square up to his death in 1960, his was the last burial in the cemetery in Old Connell.”

The June Fest project compiling an online archive of buildings in Newbridge began after the Covid-19 pandemic hit in March 2020.

A new building has been featured every week for the past 79 weeks and is published in the Leinster Leader.

Current and former residents are asked to contribute memories about the featured premises.

Anybody who wants to share information or photographs can email: junefesthistory@gmail.com.