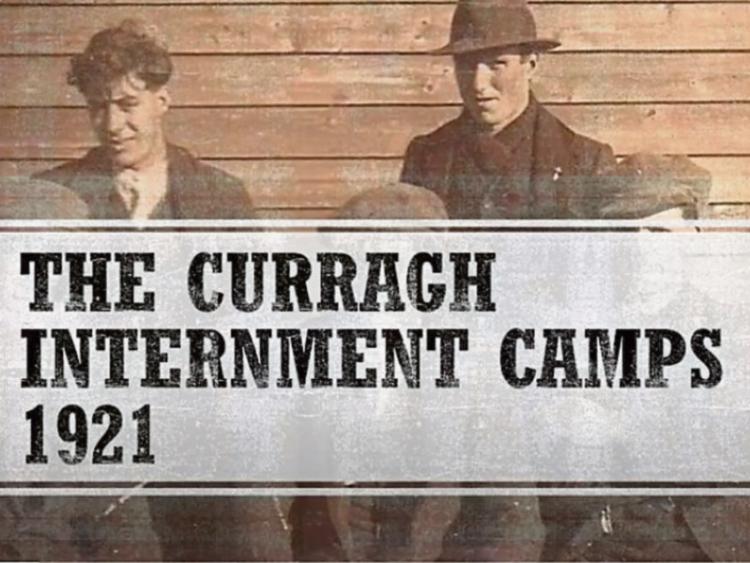 During the War of Independence (1919-21) County Kildare was home to one of the largest internment camps in the country. Thousands of men were imprisoned under emergency law — internment without trial. The purpose of internment was to contain people the British authorities felt were a threat, without making charges or having the intent to file any.

On the morning of 21 November 1920 (Bloody Sunday), 14 British intelligence operatives were assassinated by members of Michael Collins’ Squad. Then in the afternoon crown forces opened fire on a crowd at a Croke Park, killing fourteen civilians and wounding 65. That night three republican prisoners were tortured and killed by their captors, the Auxiliaries, in Dublin Castle. As a direct consequence of Bloody Sunday the British authorities began a policy of large-scale arrests of known republican activists.

Subsequently, several internment camps were opened throughout Ireland — the largest being at Ballykinlar in Co Down. However, this soon reached capacity so there was need for another large internment camp.

A site was picked on the Curragh plains and work began to have it in operation in early 1921. The Curragh Internment Camp opened for business on March 1, 1921. It was built to hold 1,000 internees but at its time of closing held 1,500 political prisoners. As it was situated near the historic Gibbet Rath, scene of a massacre of 350 rebels in 1798, it was known as the Rath Camp.

There were two fences, each 10 feet high and 4 feet wide. Between the fences was a 20-foot-wide corridor patrolled by sentries, which the prisoners called ‘No man’s land’.

At each corner of the compound stood high blockhouses from which powerful searchlights lit up the centre passage and played on the huts. Sentries armed with rifles and machine guns manned these watchtowers 24 hours a day, calling out ‘All is well’ on the stroke of the hour throughout the night.

Inside the rectangular enclosure there were some fifty to sixty wooden huts (20 feet by 60 feet), which served as sleeping quarters for up to 1,000 men. The huts were built to accommodate 20-25 prisoners. TB and consumption thrived in confined and damp places like prisons and internment camps, although no prisoners died of these dreaded diseases in the Rath Camp during its time in operation. The wooden huts were arranged in four symmetrical rows. There was also huts used for a hospital, a canteen (dining hall), a cookhouse, a chapel and a library, and a sports ground large enough to provide a football pitch and space for exercise. There were some great football matches played in the Rath Camp. Among those interned was the great Kildare footballer, Frank Burke and Louth captain Tom Burke.

The internees appointed their own OC as well as a camp council to run all their affairs in the camp. The Camp Commandant was Peadar McMahon, Joe Lawless as Vice Camp Commandant and Micheál Ó Laoghaire as Camp Quartermaster.

Around 1,300 men from all over Ireland were interned at the Curragh. The came mainly from the midlands and Dublin. Altogether 190 men from County Kildare were intermittently interned at the Rath Camp and the nearby Hare Park Camp (a holding centre for those prisoners to be court-martialled).

Three priests came regularly from Kildare town to celebrate Mass in both the Rath Camp and Hare Park Camp.

Rath Camp was deemed to be inescapable but six days after it opened Rory O’Connor, unofficially known as the ‘Minister for Escapes’ walked out the front gate, along with Daniel Ryan. Disguised as workmen the two internees walked out past British sentries. Chris Kenny of Rathangan had persuaded two workmen to smuggle in work clothes and stay away from work that day so the two IRA men could escape.

On September 9, 1921, two months after the Truce was signed, over 50 prisoners escaped from a tunnel, dug mainly by a miner from Cavan, Jim Brady. None of the men were recaptured despite extensive searches around Kildare and surrounding counties. The camp was closed and all the prisoners freed after the signing of the Anglo-Irish Treaty on 6 December 1921.

The Local Studies Department, Newbridge Library, has two autograph books and several photographs from the camp, including the Fr Clancy photograph collection. If anyone has material related to the camps such as photographs, autograph books, internment orders or would like to share their stories please get in touch with us at localhistory@kildarecoco.ie

A short film on the camp as well as an in depth interview with James Durney can be viewed on the Kildare Decade of Commemorations YouTube channel or below.

— Article courtesy of the County Kildare Decade of Commemorations Committee