Know your jellyfish - and what to do (or not do!) if you get stung on a the beach

The warm weather has brought a big increase in jellyfish 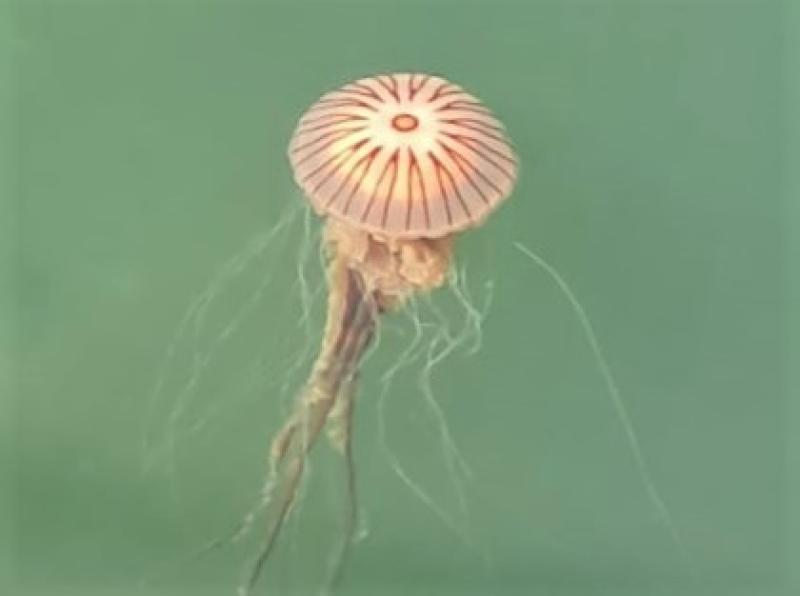 Beachgoers and sea swimmers are reporting a big increase in the numbers of jellyfish in the county’s coastal waters.

For many, the fear of getting stung by a jellyfish is so strong that they forfeit the pleasure of a refreshing dip on a hot summer day. And unfortunately, the warmer the weather, the higher the likelihood of a jellyfish bloom.

But not all jellyfish sting, and those that cause severe harm are not found in Irish waters.

According to the HSE, most stings require no more than basic first aid and simple pain relief.

So what species of jellyfish are most likely to be found in Ireland, and which ones sting?

The Common (also known as Moon) jellyfish is the one most often seen at our beaches. They are often only a few inches in diameter and can identified by their four purple/pink rings. While it can be daunting to encounter a large jellyfish bloom (a lot of them together) while bathing, the small moon jellyfish with no tentacles do not sting. This is because jellyfish stingers are only found on the tentacles.

Larger Common jellyfish develop tentacles and these can deliver a mild sting, but on the whole, they are relatively harmless.

Another jellyfish often encountered in Donegal  is the Compass. It has brown lines which meet to form v-shapes at the centre of the dome.

It can grow up to 50cm or 20 inches in diameter and with 24 tentacles and four frilly mouth-arms, it can sting. It is relatively easy to spot in clear water, but blends in where there is a lot of seaweed.

Barrel jellyfish are found in big number off Ireland’s south east coast but are rarely seen in Donegal. Rather than tentacles, they have eight mouth arms. As a result, they do not sting  but can cause an allergic reaction.

The Blue jellyfish has a translucent body with blue/purple rings. It too is found off the west coast and has been sighted this summer on Donegal beaches. With masses of tentacles, it can deliver a sting.

Sightings of Lion’s Mane jellyfish in Irish waters in recent years have led to a high degree of alarm, though most have been in the east.

According to the HSE: “The Lion’s Mane prefers the cooler waters of the Irish Sea and especially the waters off Dublin.  Recently an increase has been seen in waters off the east coast and some very large jellyfish have been observed on beaches in this area.

“The Lion’s Mane stinging cells are much sharper and can pierce skin easily resulting in a painful sting.”

There are occasional sightings of the Portuguese Man-o-war or by-the-wind sailors. Neither species is a true jellyfish but both are close relations.

If there is a lifeguard on duty, that is the first port of call for first aid at a beach.

Tentacles that are attached to the skin should be removed with gloved hands, tweezers or by scraping with the edge of a plastic card such as a bank card. They should never be rubbed off.

Mild pain can be treated with over-the-counter painkillers and itching may be eased by antihistamine creams. A dry cold pack will give relief for most stings, though for a Portoguese Man O’War sting, warm water of 45°C should be applied for 20 minutes.

Anyone who gets anything other than mild symptoms should seek medical advice.

There are a number of myths regarding the treatment of jellyfish stings.

According to the HSE: “Don’t urinate on the sting.

“Don’t use vinegar for the types of jellyfish stings that might happen in Ireland.

“Don’t use alcohol and don’t put on a tight bandage.”

Wearing protective clothing such as a wetsuit reduces the likelihood of a jellyfish sting. People are also advised to avoid standing on jellyfish stranded on beaches, and to be aware of the risk to dogs while out walking on the shore.

More information including a link to a jellyfish identification card can be found at www.hse.ie/eng/health/hl/water/bathing/jellyfish-in-irish-coastal-waters.html