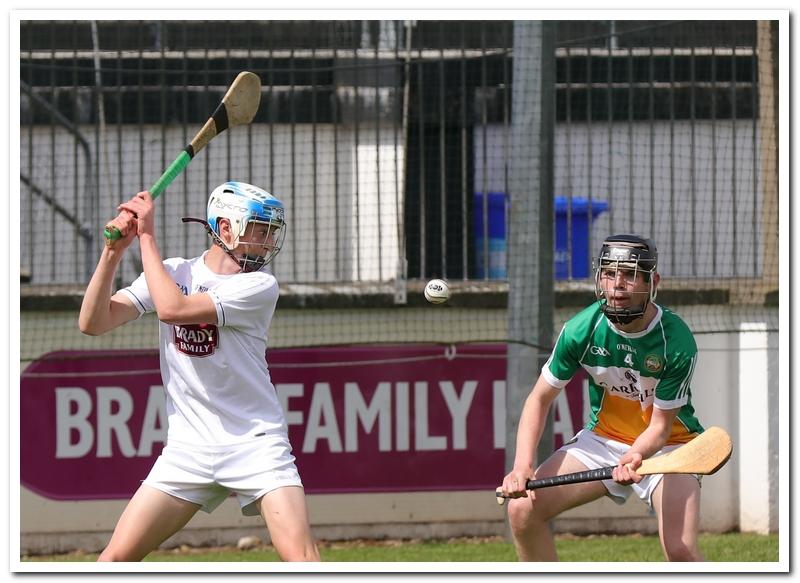 David Qualter (Maynooth) tees up the sliotar for the equalising goal as the final whistle was about to blow.

It was the breakthrough victory they badly wanted but Kildare minor hurlers delivered in style as they overcame Offaly in a thrilling Leinster Quarter-Final at St Conleth's Park on Saturday afternoon.

David Qualter was the Kildare star as not only did he score 1-7 but he also struck for goal in the sixth minute of stoppage time that got the home side the extra-time to finish off the job.

Kildare had earlier seen midfielder Conan Boran get his marching orders but after surviving by their fingertips the impact off the bench helped them get over the line.

The result now means Kildare can look forward to a huge test against Hurling Aristocrats Kilkenny this weekend in Newbridge as they take their place in the semi-finals for the first time.

Kildare were playing in their sixth game of the Championship and despite Offaly’s Sam Burke knocking over a 2nd minute score, Cathal Fenton’s men found their groove with points from Jack Higgins and Darragh Melville.

Melville who has been Kildare’s star forward throughout their promising campaign soon extended the lead but Offaly’s experience of playing higher calibre teams looked to be showing when points from Mark Troy and Luke Nolan edged them in front.

Still Kildare were proving to be very competitive and despite none of the high scoring of their previous two games against Down and Meath they still showed their quality with four of the next five points as a couple of frees from David Qualter were added to by efforts from goalkeeper Alo Hackett from a long range placed ball while Conan Boran also knocked over a score to give Kildare a 0-7 to 0-5 lead.

Offaly’s Nolan got their sole score during that period but successive frees from Troy left the teams deadlocked entering the final few minutes of the half.

There was thus nothing separating the sides come the interval with efforts from Nolan and Qualter interchanged but both had goal chances with Darragh Melville blazing wide for the home side while Offaly’s Dan Murray had an effort expertly blocked on the line from Kildare corner back Peter O’Donoghue.

Disaster struck at the start of the second half for Kildare however as both Conan Boran and Luke Wyer got involved in an altercation and after it was all said and done referee Mark Ryan gave out a pair of yellow cards but unfortunately for Boran that was his game done after already being booked.

Substitute Darragh McMahon also got in on the act but the Faithful County eventually sorted things out with points from Troy, Nolan and Luke Carey levelling the game at 0-11 apiece.

Offaly were playing their spare man in the full back line and as a result they could never really shake off the Lillywhites with the sides on equal terms again after efforts from McCabe and Carey but Troy and Nolan kicked Offaly two points clear and they looked set to move up a gear in the final quarter.

They couldn’t fend off their stubborn opposition though as McCabe who had a fabulous second half and Qualter kept Kildare in touch.

Still Offaly looked primed for success when scores from Jack Screeney and Dan Murray enabled them to take a three point lead into stoppage time but with seven minutes added on Kildare still had a chance and with six of them elapsed they struck when McMahon despite losing his hurl found Qualter and despite a shower of bodies in his way the corner forward managed to find the bottom corner with great precision.

Kildare could have even won it in normal time but Eoin McConnon dropped an effort short and the teams had to go into an extra twenty minutes.

Kildare were back to the full 15 in the extra period and they immediately took advantage with points from Qualter and Aidan Mooney but Qualter will wonder how he didn’t add his second goal when he stumbled in the Offaly square before losing the sliotar from his grasp.

It was a rather tame opening half with a Troy free Offaly’s only score as Kildare held a 1-17 to 0-19 lead.

Things were way more eventful upon the resumption however as Paul Dolan put Kildare two points clear before they were dealt another blow with Niall Lyons firing in a goal after he was found in space by Luke Wyer when a sideline cut dropped inside.

Aidan O’Brien levelled the game moments later for Kildare but with only four minutes left Offaly still led thanks to a Wyer score.

Kildare finished incredibly well though with four points in four minutes as after Qualter converted his sixth free both McMahon and O’Brien knocked over insurance efforts and rather fittingly Qualter clipped over the last point as Kildare battled to a sensational three point victory.