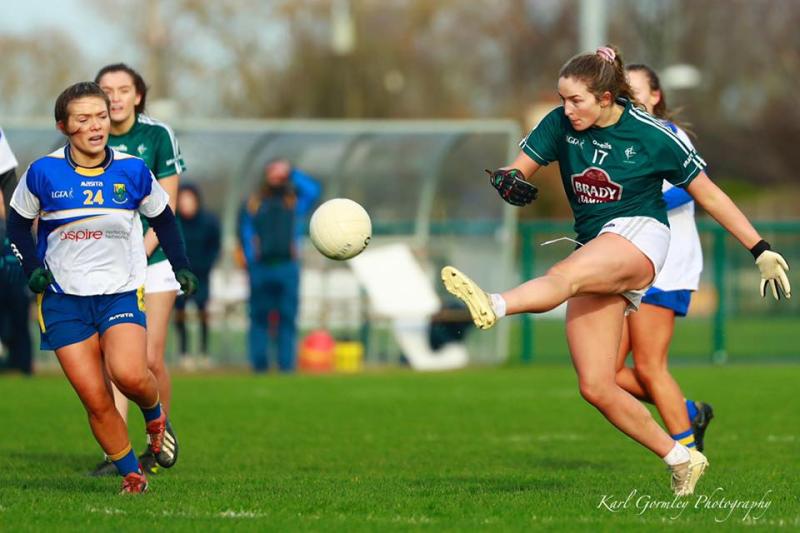 Sunday Afternoon in Manguard Plus Hawkfield was something of a throwback to a couple of years ago for the Kildare Ladies Footballers.

Mary Hulgraine was in goal for her third game this year while in front of her former captains Erica Burke and Roisin Byrne returned after long absences.

For Sarsfields Roisin Byrne it’s been a miserable two years out with injury but after appearing as a first half substitute for Joanne Deay she showed she still has all the skill when knocking over three points.

“I was really happy with that to come on and get three points and I think the quality of our forwards this year is fantastic. Its a really different type of football to what we have played before with Kildare but it’s unbelievable and really enjoyable to play in”.

An ongoing shoulder injury has sidelined the 2018 Captain for the last year or so but after undergoing an operation she is hopeful those injury issues are behind her now.

“Its been 18 months since my last match with the club and longer for County so I think my fitness has been ok as I’ve had loads of time to go running without contact but the sharpness is going to take a while to get back. I was really happy with that game time today as I really needed it and we’ve a serious chance of doing something in the League so I want to be involved as much as I can ".

“I’ve dislocated my shoulder 7 or 8 times so I’m used to the rehab but eventually the physio told me I couldn’t do it any more as it could do long term damage so I got the surgery in September and I’ve been eased back in to build the strength back up “, Byrne admitted.

The period off the pitch has been even longer for Erica Burke after sitting out the last two seasons.

The Balyna midfielder played a starring role in helping Kildare to the All-Ireland Intermediate Title in 2016 but after a raft of retirements it resulted in a disappointing 2017 for which Burke was captain.

“ It was definitley a hard year after we won the All-Ireland. 2017 was not easy by any stretch of the imagination but I think it really has stood to the girls and I was surprised to see the development when I came back in this year and that tough period stood to them”.

After suffering two cruciate ligament injuries and having a period away in America the attacking wing forward is  is raring to go for 2020.

She added: “The smile hasn’t left my face since I’ve came back and this is the most enjoyable time I’ve ever had on the pitch”.

“I love coming to training every single time and a lot has happened since I last played and I’m in a great place at the minute. It’s taken me a while to get to where I’m at now and I think I’m the fittest I’ve ever been and 100% again thank god”.